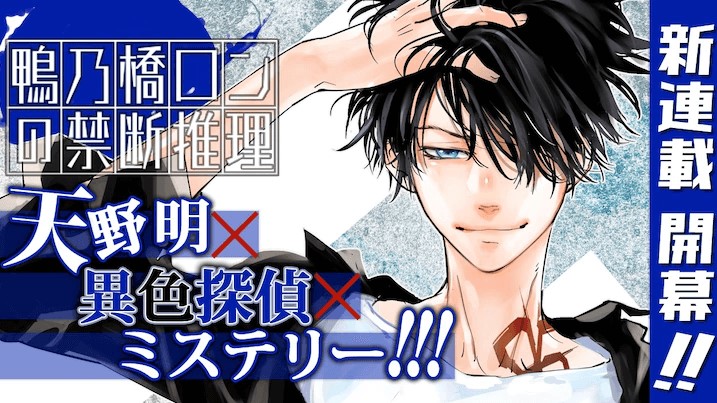 Good news to all the fans of Reborn manga! Our Mangaka is back with a detective manga this time. The official website of Shueisha’s Shonen Jump+ has launched a new manga known as Ron Kamonohashi: Deranged Detective. The manga is launched on Sunday. It is written and illustrated by none other than Akira Amano. The story of the manga is based on a mystery series. The plot revolves around a distinctive individual Ron Kamonohashi and a naive police inspector, Totomaru Isshiki.

The Japanese name for Kamonohashi Ron no Kindan Suiri is Ron Kamonohashi: Deranged Detective. The original Japanese manga is available on the official site of Shonen Jump+. To read the Japanese version click here. Furthermore, you can also read the dubbed English version in MangaPlus. To avail, the dubbed version click here. The first chapter is available on both websites. To read the next chapter you have to wait till Saturday.

Akira Amano has previously launched the manga Reborn in Shueisha’s Weekly Shonen Jump. The manga was released in 2004 and continued till 2012. Reborn was later streamed as an anime television adaptation from 2006 to 2010. Crunchyroll and Viz Media streamed the anime outside Japan. Discotek Media has licensed the anime. It was released on Blu-ray Disc in September and October of 2018. Furthermore, the manga has inspired three stage plays and the fourth stage play is scheduled for November.

MangaPlus have overviewed the manga as “This unusual duo brings the hidden truth into the light! Ron Kamonohashi, a private investigator with serious issues, and Totomaru Ishiki, a pure-hearted but dim police detective, team up to solve the most baffling mysteries! A thrilling detective story for a new generation from Akira Amano, creator of “Reborn!” and “Ēldlive”!”