Spoiler Guy
Home Discussion Anime Similar to Attack on Titan That You Must Watch!! 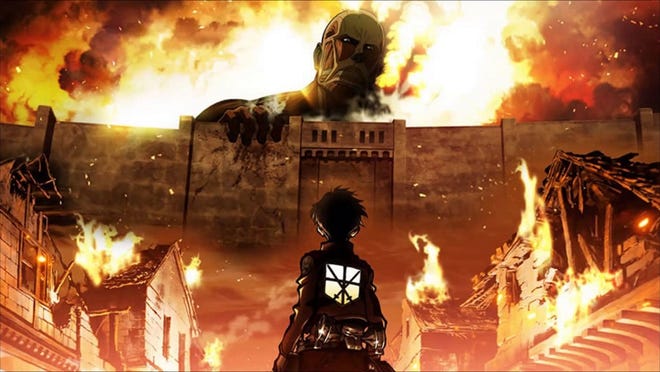 There is a lot that comes to our mind when someone says Shingeki no Kyojin!! One after other, all the seasons of this show made some unbreakable records. Hajime Isamaya was the illustrator, or we can say the magician behind this terrific show. With Attack on Titan nearing its end, fans might be feeling bad. Well, when we are here, none of them needs to feel low. This time we are back with anime similar to Attack on Titan, or in short anime like AOT. As we all know that AOT is in the end game now, why not enjoy something similar to it till the last part?

Highschool of the dead

Highschool of the Dead is set in modern-day Japan, starting as the planet is hit by a deadly epidemic that transforms humans into zombies, derogatorily referred to as “Them” (Yatsu-ra) by the major characters. The plot revolves around a group of high school students and the school nurse as they struggle with the global devastating phenomenon known as the “Outbreak.” While attempting to survive the zombie apocalypse, the cast must also contend with the additional challenges of social breakdown, in the form of aggressive fellow survivors, and the potential deterioration of their moral standards.

A huge anomaly triggered a massive earthquake that devastated Japan’s peninsula and demolished the majority of Tokyo, dropping multiple of the region into the Pacific Ocean. This is another post-apocalyptic fiction anime like AOT. A decade later, the plot moves to Ganta Igarashi, a relatively normal middle school student in Nagano Province. Ganta, as an escapee and victim of the great earthquake, has no recollection of the disaster and has led a normal life. All of this changes when a mysterious figure dressed in blood and crimson armor floats through his classroom windows. The “Red One,” grinning maniacally, slaughters Ganta’s entire class. Rather than killing Ganta, the “Red Man” implants a red crystal shard in his chest.

I still feel that SAO gets so much unnecessary hate. Though the first few arcs were boring, this show still offers a lot. Sword Art Online (SAO), an augmented world massively simulated online character game (VRMMORPG), is launched in 2022. Players can feel and manipulate their in-game personalities with their minds using NerveGear, a headset that activates the user’s 5 senses through their brain.

Akihiko Kayaba designed both the game and the NerveGear. On November 6,10,000 gamers log in for the first period to SAO’s computer systems cyberspace, only to find that they are unable to log out. Kayaba emerges and informs the players that if they want to be free, they must defeat all 100 levels of Aincrad, the steel fortress that serves as the setting for SAO. Considering most factors, this anime is similar to attack on titan.

Recommended: Anime Shows that are Similar to The Rising of the Shield Hero!

The details of the Fourth Holy Grail Battle in Fuyuki City are detailed in Fate/Zero, which occurs a decade before the events of Fate/Stay Night. For me, this anime is similar to Attack on Titan as both of them display quite a few action scenes that are worth having some goosebumps. The Holy Grail War is a centuries-old contest created by the Einzbern, Matou, and Tohsaka communities wherein seven mages call seven Valiant Souls to fight for the possession of the “Holy Grail,” which gives a wish to each representative of the winning pair. The Fourth War begins after three indecisive battles for the mythical Holy Grail.

Shinji Ikari, a youth, is summoned to the dystopian future of Tokyo-3 by his estranged father Gendo Ikari, commander of the specialized paramilitary group Nerv, in 2015, 15 years after a worldwide catastrophe identified as the Second Effect. Shinji experiences United Nations powers fighting an Angel, one of a race of giant monstrous beings prophesied to awakened by the Dead Sea Scrolls. Since the Angels’ force-fields are nearly impenetrable, Nerv’s massive Evangelion bio-machines, synchronized to their pilots’ central nervous and equipped with their force-fields, are the only arsenal capable of preventing the Angels from eradicating mankind.

Also Read: Top Anime to watch if you like That Time I Got Reincarnated as a Slime

Redo of Healer Uncensored: Why and Where to Watch? – Releasing...