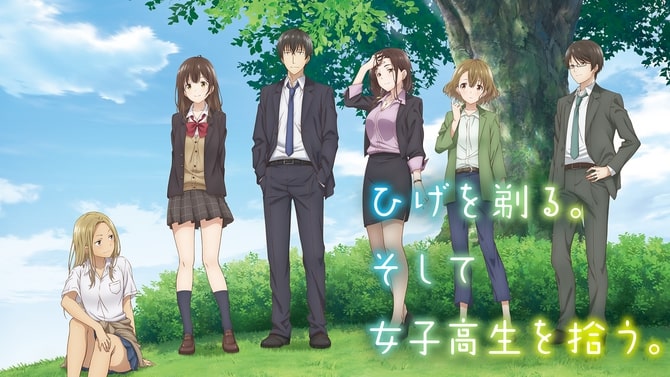 Higehiro is a Japanese comedy anime series written by Shimesaaba and the art is illustrated by boota! Higehiro is one of the funniest series I’ve seen and it is known for its perfect humor and comic timing. Its Japanese title is “Hige wo soru – Soshite Joushikoushi wo Hirou” and in English it’s Higehiro: After being Rejected I Shaved and took in a Highschool runaway. Well, that’s a quite big name, Isn’t it? so let’s stick with Higehiro for now. In this blog we will discuss about a few anime similar to Higehiro, so make sure to read till the end to not miss out on anything.

The Story starts when a typical Mature Salary-Man of Japan in his 20s is drinking his way home and he comes across this teenage girl sitting on the street. She asks him for help as she has no place to sleep, so she makes him an offer he can’t refuse. Which was that he can do her if she can sleep at his place, but he lets her spend the night without doing anything. That’s how this strange and funny story starts, now let’s have a look at some anime that are similar to Higehiro.

Koe Wa Ameagari no You ni

Koe Wa Ameagari no Youni is an anime which is of Seinen Genre, it has a lot of similarities with Higehiro. The first one is that it’s a story about a young teenage girl and a mature Man.

While doing part-time, The Highschool student develops a major crush on the Coffee Shop Manager who is 45 years old! Now which weeb doesn’t like to watch an anime with a Joshikousei and a Mature Man. *wink wink*. It has only 12 episodes so you can binge it on Netflix.

This Anime “Yesterday Wo Uttate” is similar to Higehiro because both have the storyline of a young teenage girl falling for a 20 plus Guy who is going through a phase of sorrow and depression because of rejection.

This Slice of Life Seinen Anime is a must-watch, Rikou Ouzmi the guy starts working at a convenience store after finishing his studies.

Life has become quite dull for him, but it changes when 2 girls start coming to his shop daily. Shinako whom he had a crush on during high school and Haru who has a pet raven. You can watch it on Crunchyroll and Netflix.

A Teenage girl, Maika Sakuranomiya wants to get a part-time job to support herself for her abroad studies. The only reason why Maika keeps getting rejected is because of her unusual smile, which turns into a dangerous smile when she smiles.

Rejection becomes a part of maikas life, but things turn when she comes across Cafe Stille. It is a Cafe which has roleplaying, and maika gets the opportunity to work there. Blend S is a similar anime to Higehiro because both of them have the same story of a teenage girl falling for a 20 something guy. You can watch Blend S on Crunchyroll website.

Rec is an anime about a Teenage Voice Actor “Seinyu” who aspires to become a professional one day. The drama starts when her house is burnt down to the crisp and then the young Seinyu decides to move in with a Marketing Manager she had met the same evening.

Both start living together and over the series, they develop feelings for each other. If you want anime similar to Higehiro then Rec is one of them.

Koi Kaze is an anime based on a topic that is taboo in Society. Its storyline revolves around an Incestuous relationship. This anime is similar to Higehiro because it has a teenage girl who loves a 20-year-old guy, but the guy in this anime is her own elder brother. Koi Kaze displays the incestuous relationship of a brother and sister. It has 13 Episodes if you want to binge on this anime.

The Koi to youbu ni wa Kimochi warui anime has a male protagonist who is a handsome businessman and a Kawai teenage girl with brown hair. What’s going to go wrong here? well, a lot of things. The Handsome Businessman falls for his younger sister’s classmate when she visits their place, this is where he decides to get involved with her.

Higehiro is very much similar to this anime but the Male character in this one starts advancing towards the girl up front. It is a fun anime and has 12 Episodes like most of the animes on this list.