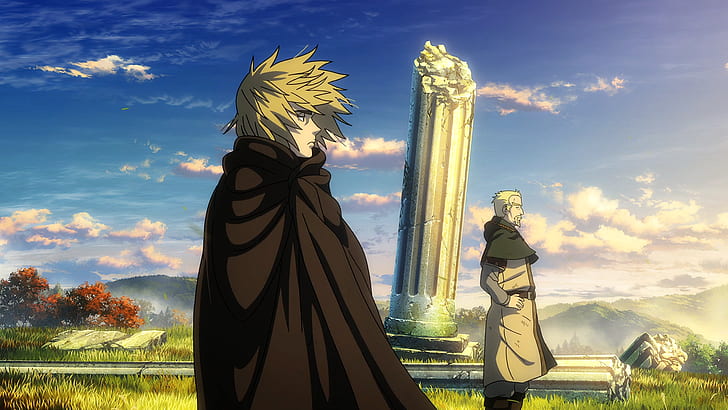 When I saw Vinland Saga for the first time, I couldn’t take my eyes off the screen. The modern, crisp anime and the direction made me fall in love with the series. Vinland Saga is one of the most popular anime of modern time. You can say that Vinland Saga is in the Top 5 Anime List in Modern Anime. It was the best anime in the summer of 2019.

The creator of the Vinland Saga Manga Mokoto Yukimira is known for his amazing plot and Art. Fans appreciate the critically acclaimed mangaka over the world for creating this amazing tale. This Story is about Thorffin, a young boy who wants to avenge his father’s death, which puts him on a life-changing adventure.

The Art, Music, Dialogues, amazing character designs, and Animation, everything about this show is Beautiful. It is an Amazon Prime Video Production, and you can watch the anime on it. Vinland Saga is about war and Thorffin avenging his father, but what if you love this anime and want to Watch Some Top Anime Like Vinland Saga? Don’t worry, We have you covered. The List we have for you is something that will make you binge on these animes.

In many aspects, Berserk is better than Vinland Saga. The Tale of Guts takes place in a wartorn country where he has to go through various phases of his life; it is said that most of it is based on Viking’s story and mostly based in a wartorn world.

Berserk is more violent than Vinland Saga in showing violence and blood. Berserk hasn’t shied away. If you’re looking for a Top Anime Like Vinland Saga, Berserk would be my first recommendation. Also, the Berserk Manga is one of the best out there!

So we all know how famous this anime is! Attack on Titan, also known as ‘Shingeki no Kyojin,” is a Monster created by Isayama. Large Humanoids, War, Blood-shed! It has everything a Vinland saga fan would love to binge on. Also, It has been rated the Highest Rated series on IMDB, beating Full Metal Alchemist Brotherhood anime.

Eren Jaeger, the MC of the show, watches his mother get eaten to bits by a Titan, and he vows to wipe out every titan from the world. The writer, Hajime Isayama, has written a plot that is a mind twister. You can either chose Marleys or Eldians and found the latter one evil. The Anime is similar to Vinland Saga, where Thorffin wants to avenge his father, minus Eren being a world-destroying homicidal maniac. You can watch it on Crunchyroll.

The kingdom is based on the historical time where the states in China were going through a War Phase, where everyone had to be involved in the war. In this way, it’s very much Similar to Vinland Saga. The kingdom is a story of two best friends named Piao and Xin, who are orphans because of China’s ongoing war.

After a time, Piao is selected to serve the King’s Army, where he meets his death during a battle. This is when Xin enters the scene to avenge his friend Piao’s soul and vows to become the Great General of China during his journey. You can watch this amazing Anime on Crunchyroll. If you need a top anime similar to Vinland Saga, then this might be the one!

Dororo is a tale of Hyakkimaru, a guy living without his real body parts because his money-hungry father had sold his body parts to Demons in exchange for Prosperity and Wealth. He decides to go on a mission with Dororo, a small boy who steals for a living, and he was orphaned during the War.

The Anime shows how Hyakkimaru and Dororo tackle enemies who come in their way during their journey, and it’s not a similar plot to Vinland saga. But you will love to give it a try. It is based on War, has amazing character designs, a well-written storyline, and amazing animation. You can watch Dororo on Netflix.

This series, Castlevania, is created from the Japanese Video Game called Castlevania. It’s a Netflix original production. It can be debatable if we can call it an anime. Because it’s made in America by Americans, but it adapts the original anime style. So I guess we can count it as an Anime.

Like Vinland Saga, this anime is based in Wallachia and is a tale of Revenge. When the enemies burn count Draculas’s wife, he decides to go all-out war against the entire nation Wallachia. He goes against powerful enemies like Alucard, son of Dracula, A Monster Hunter, and a magician called Sylphia Belnades. If you’re searching for a top anime similar to Vinland Saga, then this Historical based anime on vengeance is a perfect watch.

The Heroic Legend of Arslan

This Historic anime is based in a fantasy country called Pars. Arslan is the prince of Pars’ kingdom and is known for his amazing skills and power on the battlefield. The Story starts when Arslan’s father is betrayed, and their kingdom and land have been invaded and captured by their arch enemies, the Lusitanian Empire.

Arslan had thought that his future was sought to be the prince of Pars and serving the kingdom, but now after the invasion, he has to embark on a different journey to win back his people and kingdom. Like the story of Thorfinn in Vinland Saga, Arslan’s father was betrayed, and he embarks on a journey of revenge. You can easily binge on the series on Crunchyroll.

Just finished golden kamuy season 1 and 2 and it was really good, definitely starting the manga after I finish s3. pic.twitter.com/nBNvSV4CKb

In Golden Kamuy, an ex-soldier of Japan and a girl from the Ainu clan named Asirpa go on an adventure searching for the legendary treasure. The story is about a clan called Ainu, who is a lower class of people in Japan. Golden Kamuy goes around their story like the clans in Vinland Saga are highlighted. If you want to watch a Top Anime similar to Vinland Saga, Golden Kamuy has a great story plot, and you can watch it on Crunchyroll.

Rurouni Kenshin is one the most underrated anime out there. Some of the otakus might not have even heard about it yet! It is made by the creator Nobuhiro Watsuki, and the story revolves around a Samurai assassin who decides to become a good person and fight for justice. You can easily watch this anime on Netflix.

Rurouni Kenshin is the anime that is most similar to Vinland Saga in this list! Thors is the father of Thorfinn and Ylva through his marriage to Yelga. Kenshin Himura’s story matches a lot to thors, where both of them want to get away from the bloodshed of war and live a peaceful life with their families.

They decide to live with their moralities, but the Past won’t live the way they want. But are somehow dragged back into the wartorn worlds of theirs. They have to try to win against this while holding on to their good side and hoping to change the situation of their respective worlds.

These are some of the greatest and high rated animes out there, and I hope this list helps you out with your search to find Top Anime similar to Vinland Saga.