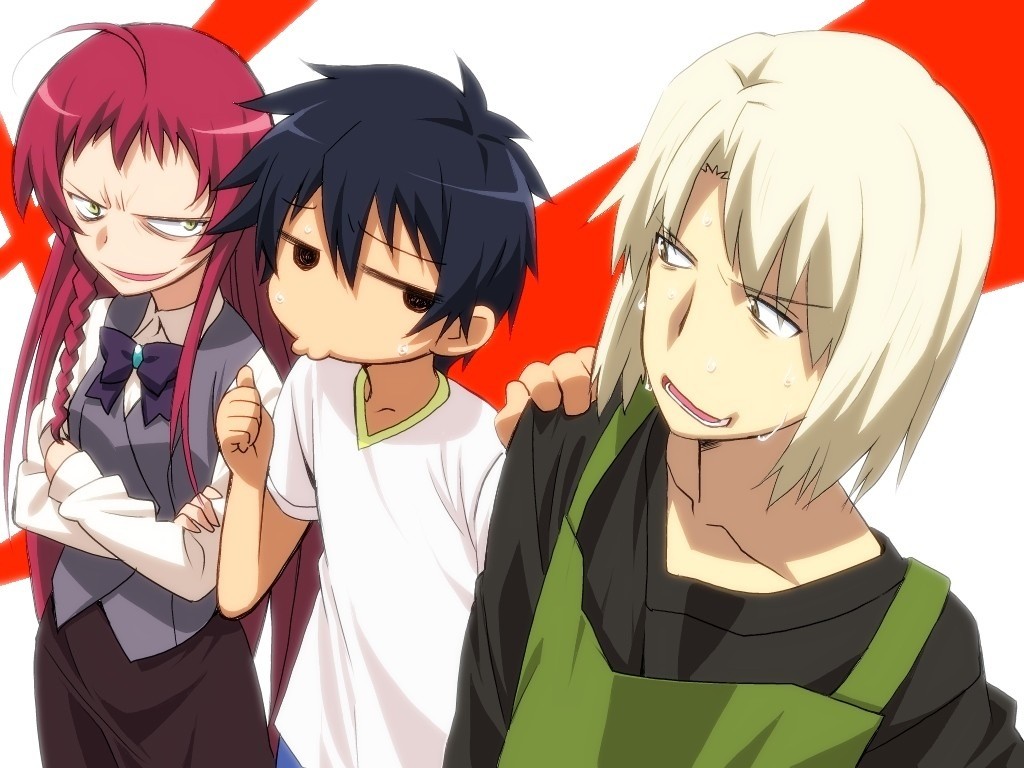 In this list, we will talk about the Best Demon Lord Anime With Angels, Demons and Heroes and rank them. There is actually a lot of great anime consisting of these three elements. Today we are going to be telling you about the 10 best ones.

So without much wait, let’s start this list. Note that the anime is ranked according to our preferences.

So overall this is a very enjoyable anime. So basically what the story is that 100 years ago, the demon lord tried to kill all of humanity. The heroes killed him and everything was peaceful since then. Sai Akuto our mc, His goal is to be someone of great authority who will lead people to lead righteous lives. Basically, it turns out that he is destined to be the next Demon Lord, and his eventful daily highschool life beings.

If you want to ease into this category, with not a serious plot but good action scenes and a fair bit of nudity this show is for you. Go and give it a try.

Tomoki Sakurai, our mc and man this is some anime. If you think this is going to be a serious anime with Demons, Angels, and our MC, you are probably wrong. This anime is totally random, and honestly i quite like that randomness.  Sakurai is a total pervert with a harem of angels and other girls. It’s a must-watch comedy anime if you are looking for something that is fun and light-hearted.

Sakurai says, ” The Following Story depicts the downfall of my quiet and peaceful life. Flying underwear, People stealing and throwing underwear, wrestling with underwear, you can see all of this happening in the anime. Surprisingly tho, there is a great deal of character development involved with all the characters, and the side characters also receive this benefit.

Overlord is the kind of Demon Lord anime you begin watching with some reservations.”A popular MMORPG game traps its players inside and the players now have to play the game where the consequences are quite real”. Sounds familiar? Well, that’s exactly what happens in Overlord but it sets new stereotypes in the genre. Instead of being left as a hero or even a human, he’s stuck as Ainz who is a demon lord.

Overlord is a work of art, it looks really pretty and detailed. The fight sequences are just amazing with an amazing soundtrack to follow. This is easily one of the most enjoyable amines on the list so be sure to watch it.

Owari no Seraph in easy terms can be defined as a general Demon Lord, angels, and Heroes with the addition of vampires. anime that follows the shounen tropes and does it perfectly. It might not stand out storywise, but in terms of characters and their development, it does wonder. The story is of a power struggle between humans and vampires, but the real story is much darker with a fair bit of generic plot twists. The art is really good and but the fight scenes do feel lacking sometimes.

Humans on their own can’t kill vampires, so they form a contract with a demon who takes the form of cursed weapons to fight demons. Everything about Owari No Seraph can be easily predicted but the enjoyment is nice.

Ah, it’s probably the funniest Demon anime on the list. Beelzebub is a show that doesn’t take itself too seriously, and this approach works very well for the story being told. The main characters, particularly Furuichi, seem aware that the part of a show that routinely sets them up with ludicrous scenarios, as if to test their reactions, and they are not shy about calling out some of the more preposterous elements that arise.

Characters also address the viewer directly, which adds a nice touch of humor to the show while making the situations more relatable. I found this approach more satisfying than one where we are asked to accept ridiculous circumstances at face value.

This Demon Lord, Hero, and angels anime was a pleasant surprise for me. It’s a really well-made anime about a Devil king and his assistant who escapes to Earth after the Hero and his party defeat the Demons. The Hero leaving his party behind following the Two devils and the three of them are left stranded on earth where there is no magic. To earn a living to survive in the world, the demon lord takes up a part-time job. The anime follows his daily life and his interaction with the hero.

The art of the anime is so nice and pleasant to look at. Honestly, the art and animation are too good. During the fight scenes in the show, we get to know how Overpowered our part-timer is.

Maoyuu is more like a romance-Demon Lord anime with a cute demon waifu and a Hero. The anime depicts a fantasy world where humans and devils are fighting for the ultimate authority while exploring the infrastructures involved in wars. The hero meets the demon queen and falls in love with her. Together they aim to change the world. The connection between them is very pure and fun to watch. The side characters are also well done.

Maou is cute and romantic, but it also has an amazing MC who is very op and the fight scenes are just amazing to look at. You will enjoy this if you want to watch something light-hearted without getting much mentally involved.

What if you actually put an MC who actually has balls to Reciprocate the feelings in a Harem, well no need to look anymore because you just found it. It all beings when a Breakdown Phenomenon made our MC Arata town disappear. But due to the powers given to him in a grimoire by his mysterious childhood friend, Arata reconstructs the world. Arata then meets Lilith and the other girls in the magic school they go to and thus his path to become a Demon Lord Begins.

Trinity Seven has a lot of Fanservice, like a lot, and trust me it’s really good. The character’s interaction with each other is truly amazing and very entertaining. And all the characters are very likable. In terms of the story, it progresses Slowly but is present.

2. The Testament of Sister New Devil

The testament of the sister new devil is an ecchi harem Demon Lord heroes and angels anime with a lot of High Paced action scenes. Basara is our overpowered MC, he’s decisive and badass in his own league. He was previously a part of the Hero Clan but was exiled due to his hidden powers. The characters are good but they can follow a certain trope. A fair warning, the show has a bit of fan service and a lot of ecchi scenes.

Overall it’s an enjoyable anime with a decent plot but really well-done fighting scenes. The art is nice, the characters are attractive and our MC is over-powered. There are plenty of demons and heros in the show to make it in our list of Demon Anime.

High School DxD is the greatest ecchi Demon Lord, Heroes and Angels Anime ever made. Even if we consider other Demon Anime, High School DxD ticks all the boxes. The only reason it’s not number one is that it lacks seriousness. The story follows Hyodo Issei, a pervert who gets reborn as a demon after a certain incident. He is reborn as a pawn under Rias Gremory who is a Demon Nobel, thus begins his journey of fighting angels, and other demons. But that’s now the charm of High School DxD. The charm lies in the women of the show who becomes a part of Issei’s harem.

The Characters and their development is one of the best among anime although it follows the standard tropes of an Ecchi Harem Anime, it obliterates the standards. The art and the animation are so good that it makes every fight 10 times better plus Hyodo Issei one over-powered MC. I definitely recommend each and every one of you to watch this show.

This is for our List for Demon Lord Anime with Heroes and Angles. I hope you find one of the above anime to your liking and give it a try.