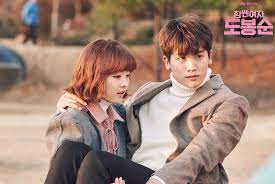 There truly is nothing better than staying in bed to binge your favorite K drama. Sixteen or more episodes filled with happiness, laughter, sadness, mystery, or thriller combined with the best OSTs. That is pure magic. Often we’d like to take a break from the regular romantic K dramas and jump into Sci-Fi Dramas. We enjoy it even more with some Badass Leads. Here is the list of a few Sci-Fi K-Dramas with Badass Lead.

Although many K Dramas out there, some would make any grown adult shiver with their deadly stare. With so many K-dramas available, there are more than plenty of badass leads out there.

Some of these characters stick to our minds throughout, and some turn out to be our role models. Let’s jump right into the list of a few Sci-Fi K-Dramas with Badass Lead.

Do Bong-soon is a woman born with superhuman strength from the long line of women possessing it.  Min Hyuk is the CEO of Ainsoft, which is a gaming company.  He witnesses her strength and decides to hire her as his personal bodyguard as he kept receiving threats from an anonymous guy. Simultaneously, Bong-soon’s dream is to create a video game with herself as the main character. She wants to become a delicate and elegant woman as her crush, In Guk-doo, looks for the same in his potential girlfriend.

A series of kidnapping cases happen in Dobong-dong, which is the district Bong-soon lives in. She is determined to catch the culprit, who targeted her best friend. She receives Min-hyuk training to manage and control her strength to use it for good causes.

2.Memories of the Alhambra

Yoo Jin-woo receives an email regarding a groundbreaking AR game about medieval battles in the Alhambra. As the CEO of an investment company specializing in optical devices, he travels to Spain to meet the creator of the game, Jung Se-Joo. However, Se-Joo has gone missing, and there, he meets his older sister. She is the owner of the hostel he stays in and a former guitarist. The two of them get entangled in mysterious incidents as the border between the real world and the AR world built by Se-Joo begins to blur.

This K Drama revolves around Kim Min-kyu and Jo Ji-ah. Kim Min-kyu lives a luxurious but isolated life. This is because he is allergic to physical contact with other human beings. He then meets and falls in love with a girl pretending to be a robot for her ex-boyfriend, a genius robot professor. Jo Ji-ah is trying to make it in life by creating businesses based on her inventions.

4.My Love From the Star

Do Min-Joon is an alien who landed on Earth in 1609 during the Joseon Dynasty. He saves a girl named Seo Yi-Hwa from falling off a cliff. He ends up missing his return trip to his home planet and is stranded on Earth for the next four centuries.

5.While You Were Sleeping

Hong-Joo lives with her mother and helps her run a pork restaurant. She is haunted by seeing the future deaths of others in her dreams. Jae-Chan is a prosecutor. One day Jae-Chan and his younger brother move to the new house, and they become neighbors with Hong-Joo. This K Drama continues to take thrilling turns. After a nerve-wracking adventure, Jae-Chan and Hong-joo later work together to solve other cases.

These K Dramas will surely brighten a boring day. Binging these series is satisfying to a great extent.