Black Clover really knows how to maintain the suspense, even though we have seen the demon that resides within Asta’ grimoire, there isn’t an actual revealing of the strength or the whereabouts of that Demon, making fans all the more agog to Asta’s Demon’ true identity. Well, that’s what we are here for, discussing all the possible secrets of Asta’s Demon. So, without any more delays, let us get this started.

Update: We have updated our article in detail. You can read more about the same here.

(Note: The blog may contain spoilers from the Black Clover manga and anime If you aren’t keeping up with the anime or haven’t read the manga. You may stop reading now) 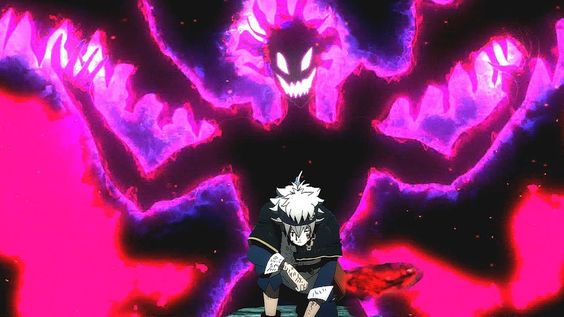 Everyone who’s keeping up with the Black Clover anime knows there’s a demon inside Asta’s Five Leaf Clover grimoire. There’s even a Black Clover quote, The three leaves of the clover represent faith, hope, and love. Within a fourth leaf dwells good luck. Within a fifth leaf… resides a demon. So there are quite a few possibilities of either Asta being a demon child, somewhat half-demon and half-human child, or Asta getting some hidden demonic power from his parents.

Since the anime started, Asta manifests a hidden power that is beyond Magic and is yet to be discovered within the Clover Kingdom.

What is Anvil and Wevil in Black Clover?

Also, read-  Demon Slayer Chapter 206, Is it Possible to Have Kimetsu no Yaiba Manga Sequel?

Every Black Clover fan who has been keeping up with the anime, as well as manga, is already aware of Asta’s Devil. In this post, we will be discussing all the possible theories behind the secrets of the anti-magic Kid, Asta, and his Five Leaf Grimoire.

Also read: Asta vs Yuno, Who is Stronger?

How did Asta get Demon Powers?

It all starts when Asta and Yuno entered the Magic Knights Entrance Exam. Yuno gets a rare 4-leaf clover, and Asta gets a never-seen-before 5 leaf clover grimoire. The Grimoire is referred to as the Demon Grimoire throughout the series. There’s a Black Clover quote that says, “The three leaves of the clover represent faith, hope, and love. Within a fourth leaf dwells good luck. Within a fifth leaf… resides a demon”.

The Grimoire that chose Asta has the power of an Anti Magic Devil. The name of this devil is still unknown. However, we know one thing for sure. Among all other demons that have been introduced in the series, Asta’s Devil seems far more superior and stronger.

There’s another cool theory that actually might be true. What if Asta’s demon is taking in all the magic power Asta neglects. In short, all the magic attacks Asta neglects aren’t actually neglected. They’re being absorbed by Asta’s Demon. Now, you must be thinking how can a Demon use more than one form of magic or collect more than one type of magic, then let us take you back to the time the first Wizard King and the Demon fought. Got it now? The Demon was using all types of magic.

The Demon that got summoned back in the era of The First Wizard King was using the all magic-mana types. Which makes it more clear how Asta’s Demon can easily absorb the magic that is being neglected (so-called) by Asta. 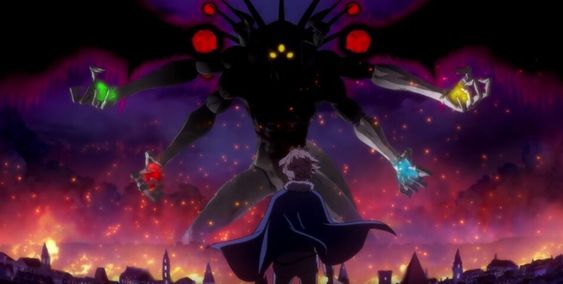 Who is Asta’s Demon and how did he get inside the Grimoire is still a question left unanswered. The most possible answer would be, Just like Yuno’s Wind Spirit, Asta’s Demon is a Demonic Spirit. Strong enough to devour all magic-mana types of this era. The demon seems to be holding in and absorbing all the magic power until he gets the minimum amount of magic required to obtain a physical form or take over Asta’s body.

Another theory on Asta’s Demon might sound little Narutoish. What makes me say that? You will find it out soon.

After hours of scrolling on the Internet, we finally got through something that was making sense. What If Asta’s Demon was with Asta since the beginning? Wait, I’ll explain.

Asta is a descendant from a demon from the dimension of demons. And Asta actually had some magic power inside him but the demon canceled it out. Basic maths.

If we stick to the basic definition, Mana is a form of life force that is used to produce magic. And it is obvious that without life forces, our bodies won’t operate until we die, so It’s definitely impossible for Asta to be born without any magical prowess until or unless he was created as an artificial being (i.e. a homunculus that we saw in the anime Full Metal Alchemist).

The creator of Black Clover made it easier for us by denying that Asta isn’t an artificial being.  In the world of Black Clover, mana in the Normal World is positive while mana in the Other World (Demon) is negative. If the two manas blend together, they would negate each other, which can result in the explosion and disappearance of the two manas. 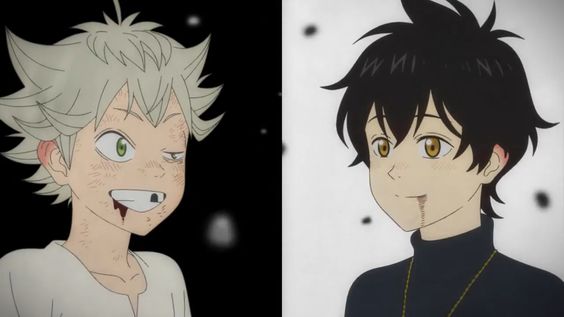 So here comes the Naruto reference, What if the Demon got sealed within Asta by his parents during an attack on them. And, Asta doesn’t belong to this Kingdom, he belongs to the Spade Kingdom, known for their association with the Demons. Asta’s father formed a patch with the demons and sealed one within Asta. Resulting in Asta and Asta’s Demon canceling out the magic, hence making him a kid with no magic powers.

So far, only four demons have been introduced in the series. While the anime did leave a lot of information about the devils, there’s no such big revelation to the Devil that resides within Asta’ Grimoire. Technically, there were 5 demons but we have excluded the Demon Licht turned into.

The first demon that was introduced to the series was Asta’s Demon. As of now, there is no hint of the magical prowess, powers, strength of him. Considering how confident the demon is, it’s safer to assume that the demon is far more superior than the other ones that have been introduced in the anime. 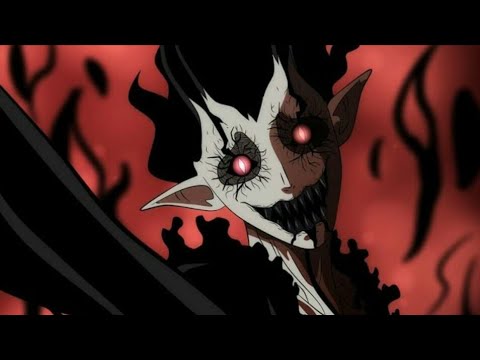 Secondly, We got introduced to Zagred the Wevil, Word Magic Devil. The main antagonist for the Midnight Sun arc, and the reason behind the massacre of the Elf tribe. He is also the one who plotted the reincarnation in order to get his hands on a grimoire. As he crumbles to death, we saw Asta’s Devil mocking him and his strength.

Also Read: Who will be the next Wizard King?

In the recent Heart Kingdom arc, we have been introduced to a few more demons. As of now, only two of them are introduced. But it is highly expected that Asta and the Black Bulls might encounter other strong Devil, including Zenon’s Devil. For now, we sure have an idea about Megicula and Lucifer.

Megicula is a high ranking devil who is Vanica’s devil. The curse on Acier Silva(Noelle’s mother) and princess Lolopechka were bestowed upon them by the Devil, Megicula.

The other one is Lucifero, the name itself comes from the Italian pronunciation of Lucifer. Lucifer is another high ranking devil who serves, Dante. The true strength of his devil is yet to be known, however, one thing is sure, the devil is one of the strongest ones from the Demonic Kingdom.

Recently, when Dante asks Lucifer of Asta’s Demon, he says that this demon is not among the superior ones. So no one knows much of his demon either.

Is there the Demon Kingdom in Black Clover?

There are high chances of having the Devil Kingdom in Black Clover. As there have been lots of Demon invading the other Kingdoms in the series. We could expect an entire demon race attacking all these Kingdom in the nearby future.

Technically, there are 52 cards in a deck. All the Kingdoms in Black Clover anime are based on the 4 divided ranks of a deck – Clover, Diamond, Heart, and Spade.

However, in each deck, there’s a Joker. What if this Joker denotes another Kingdom full of devils and demonic curses. What if Asta’s Devil comes from the Same kingdom? We will surely get an answer to this in the upcoming arcs of Black Clover.

What is the secret to Asta’s Demon strength?

There have been lots of secrets revolving around the strength and the true ability of Asta’s Devil. No matter how strong opponents appeared, we never saw the Devil take control of Asta’s body. Moreover, with ability as rare as Anti-Magic.

The demon sure is a way to destroy any kind of magic. And, as per our speculations, we might just get what we are looking forward to, in the current arc of Black Clover.

Asta’s Demon and Past

It seems just like the other Demons and Yuno, Asta also belongs to the Spade Kingdom. But, considering how the creator chose the Spade Kingdom for Yuno’s past makes things clear. Asta is not from any four of these Kingdoms.

In the recent episodes, Asta and the others fight a bug with man-made mana. So, there have been theories claiming, Asta being a homunculus created in a lab with zero magical prowess. But that may sound absurd as the creator has assured that Asta isn’t a homunculus.

But, as we look deeper into it. We realize the power Asta has, was somehow for Asta only. If anyone else were to use the Demon Grimoire, then they will end up getting their mana neglect by the Anti Magic Devil. Since he had no magical prowess, Asta could easily control the Grimoire. 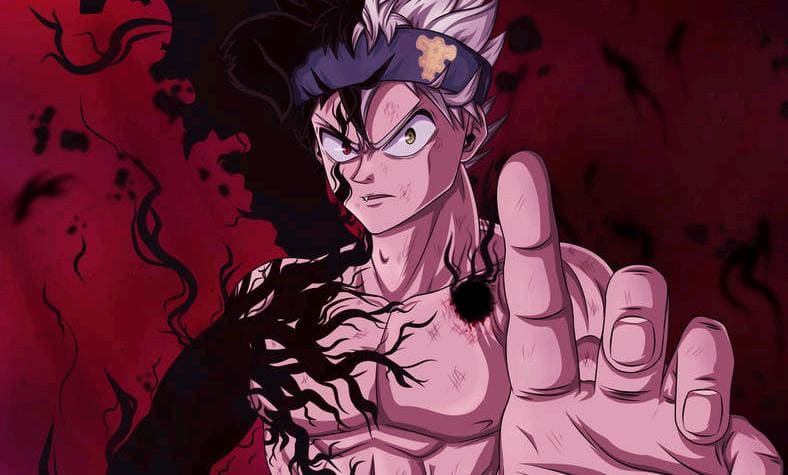 Will Asta Get any Stronger?

Devils are selfish beings, who make a pact with humans in order to take their body as a host. However, in Asta’s case – it seems the demon did take quite a liking to Asta. As he grew throughout the series. It’s a matter of time until we see an Asta Demon centric episode/chapter.

Asta is training on a regular basis to keep himself strong physically. On the other hand, if Asta were to completely master his Demonic powers, he’d be pretty much unbeatable.

Well, that’s what we have for today. Theories are possibilities that might or might not be true, we appreciate much more theories and other possibilities in the comment section. Do let us know what do you think about it. Make sure to follow our Instagram for exclusive anime news: @TheSpoilerGuy