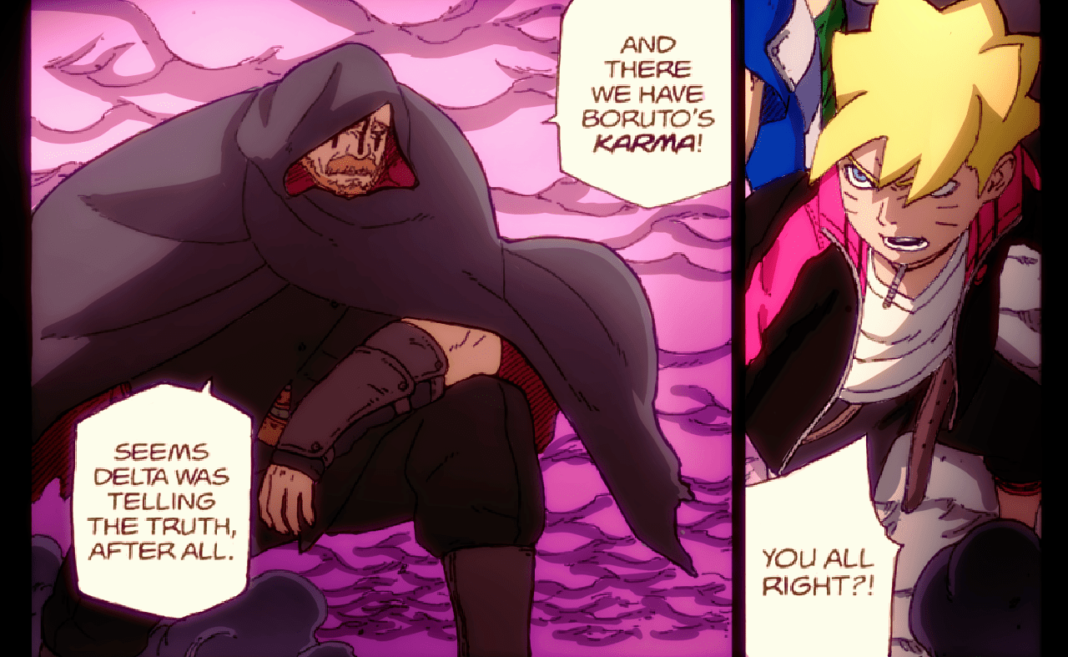 Howdy guys, in this post we are going to be about Boruto Chapter 44. We’ve included information about the release date and where you can read it. Note- This may contain spoilers if spoilers bother you I suggest you stop here to skip to the release date section. So, proceed with the utmost care-

The latest chapter of Boruto was quite interesting- Chapter began with Sarada slashing Boro’s body with Chidori. Obviously, that wasn’t enough in order to defeat Boro.

This is where chapter took an unexpected turn- Boruto released his Karma power. In the next moment, we saw Boruto is flying in the air with a single horn outgrown from his forehead. He activated perfect Jougan and mentioned Boro as an inferior creature.

After that Boro scaredly whispered- “Ohtsutsuki”. Later, Boruto borrowed chakra from Naruto. It was like- Boruto consumed by the enormous amount of evil power. In just spilled seconds, Boruto defeated Boro with the giant Rasengan and manage to save Naruto.

At the end of the chapter, Kashin talked with Amado and asks about the location of the Code and Boro. Later, Jigen moved in direction of Jigen’s room and mention that he is going to take him down.

According to our sources, the series is on schedule and there is no delay in that. It means that Boruto Chapter 44 is going to release on 20th March 2020.

The spoilers and leaks are basically the raw scans, that are being translated by the popular translators on the internet. But you may not worry, we will make sure to add the leaks and spoilers to the article, as soon as they’re out.

You can put your opinions regarding Boruto Manga’s chapter 44-in the comment section below. Furthermore, the spoilers of Boruto 44 are expected to e release on 18th March 2020.

Recently, OrganicDinosaur hit fans with a tweet regarding Boruto Chapter 44. The tweet is about the fluffy promo text for Boruto 44-

“Boruto is becoming stronger because of the power of ‘Karma’…!?”

“We’ll be progressing towards new developments in the battle against ‘Kara’…!?”

As we all know that Kashin Koji is a very strong competitor and very capable of doing this execution. But on the other hand, Kara is exceptionally strong and able to defeat 2 strongest ninjas (Naruto and Sasuke) in a single fight alone.

Besides this, we can also expect that Boruto chapter 44 might reveal some more information regarding the Karma power.

Kawaki might work more on his Karma power as he experienced what it actually capable of. So, there is no doubt that Boruto chapter 44 is going to be another amazing shot for the fans.

Where To Read Boruto Chapter 44?

All the chapters of Boruto manga are available for free on Viz Media and Mangaplus. We highly condemn the use of streaming anime or reading manga on an unofficial website. You can officially read Boruto 44 on Viz as it will support creators.

So, what do you think of Boruto Chapter 44? Let us know your views in the comment section.