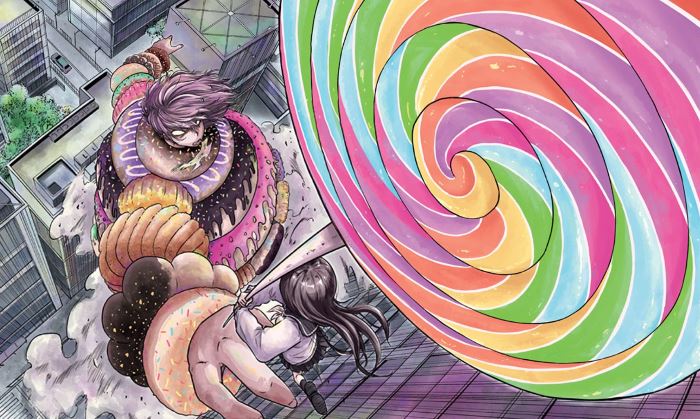 Candies have played a big part in our childhood. But have ever wondered what if they are actually evil in disguise? Candy Flurry is a manga that shows how the people of Tokyo are facing death with the rise of candy criminals. The candy criminals are the ones who have consumed one of the special 100 candies distributed to the citizens. It has given them their special power related to the candy they ate.

Candy Flurry, Ch. 3: Tsumugi comes up with a daring plan to hide in plain sight by joining those who hunt her. Will it work? Read it FREE from the official source! https://t.co/BqT4lkfzGe pic.twitter.com/PkpWKMvryn

During that time Tokyo was destroyed and it was Lolipop user who did it. Tsumugi is a lollipop user but she avoids attention and wants to continue living her life as a normal civilian. However, when she faced the donut user she was forced to use her power and caught the attention of the Sweets Police Recette.

There is someone lurking in the dark who knows everything about the incident which led to the destruction of Tokyo. In the future, we will see many fights among the other candy users as well. Also, know if Tsumugi was in any way involved with the incident in Tokyo.

Irie Senpai has been following Misagi Midori and Tsumugi around. She has a sneaky nature and also trying to hide something. Her character doesn’t seem quite innocent we will get to know more of what is she looking for in Tsumugi and what is her intention?

Just like the other chapters, Candy Flurry manga Chapter 16 will release on 16th May 2021. In case there is any delay or update, the chapter will be updated with due information.

Where to read Candy Flurry manga?

Chapter 4 of Candy Flurry is officially available in Viz Media, MangaPlus, and the official websites of Shonen Jump. The websites require membership to read the chapters. However, you can read the latest three chapters for free and one chapter will be locked by the time chapter 4 is released.

That’s all for now for more updates visit Spoilerguy!