Hey Guys, in this blog we will discuss DanMachi Season 3. As most of you must be aware On 27th September 2019, the official twitter for DanMachi confirmed the Third Season for DanMachi is on the way set to release in July 2020.

Unfortunately, that is not the case now, and there has been a delay in the release date for DanMachi Season 3 Leaving Fans heart-broken who has been waiting for a season 3.

It’s been almost 3 years since the last Episode of the DanMachi Season 2 and the DanMachi Movie. Season 2 Ended with Bell accepting Hestia’s feelings for Bell after he rescues her. This opens a lot of development for season 3, plus a new addition to the crew, Wiene who was teased at the end of Season 2.

The anime previously was scheduled to release in July 2020, but it has been delayed. This news was confirmed by the DanMachi Light Novel Website. DanMachi Season 3 has been delayed to “October or Later” due to the current Covid-19 Pandemic. A tweet will also be made regarding the same in the official twitter for DanMachi Season 3. We will update the season 3 Release Date as more information is released. Be sure to follow us on social media to stay in tune with the latest news.

Meanwhile, you can watch the Season 3 trailer which teases a new character and a brand new story.

Hopefully, Is It Wrong to Try to Pick Up Girls in a Dungeon? Season 3 will be 13 episodes long in order to account for the greater length of the source material. The good news is DanMachi Season 3 has plenty of source material to draw upon. Better yet, English-speaking fans who want to read ahead can jump to Volume 9 and read so far ahead that they’ll be getting into DanMachi Season 4!

As we can see from the trailer an Intelligent monster is born from the Dungeon and Well manages to find her in an injured state. He saw the monster crying as the other basic monsters attacked her. Bell decided to leave the female monster alone but was shocked further when she actually spoke. She introduced herself as Xenons, thus also probably adding her to his harem. Lily gets jealous and accuses Bell of having a monster Fetish. Hestia gave the Monster a name, Welusine but it is shortened to Wiene.

Rumors about the monster start spreading and Bell is in the center of it. The Third Season will show us how Bell Deals with this problem and how does he restore the balance between the surface humans and others of the intelligent monster species. 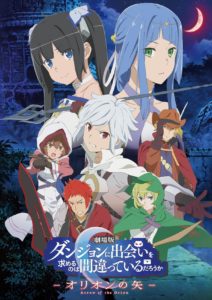 The history of Danmachi before turning into anime is a bit complex. It was a light novel series written by Fujino Ōmori and illustrated by Suzuhito Yasuda. But The series has been adapted into three manga series in with different illustrators and writers.

The popular anime franchise has a movie called Is It Wrong to Try to Pick Up Girls in a Dungeon?: Arrow of the Orion. After 2 amazing seasons in 2015 and 2019 people are waiting for season 3. I hope our waits come to an end soon.

This is it for DanMachi Season 3 Update. Thanks to all of you for reading! Furthermore,  For the latest anime news Make sure to follow our Social media accounts for exclusive spoilers.

While you wait for DanMachi Season 3, Don’t forget to read our latest blog: Yuri On Ice Season 2 Release Date and time, Plot, and much more.