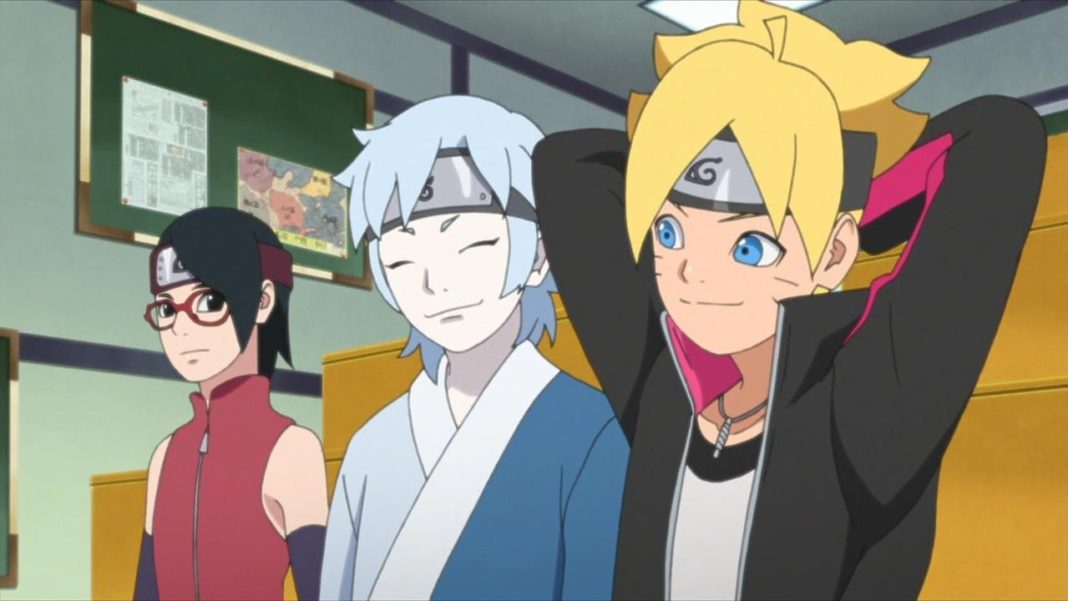 Hey Guys, In this blog we are going to discuss Boruto Episode 155 Delayed. Besides that, this post includes the details, release date, spoilers, and much more of the upcoming episode of Boruto. Furthermore, this blog contains spoilers. If spoiler bothers you, I suggest you stop here. Otherwise, you can go ahead.

“Himawari First-Hand Ninja Experience ” was an episode that focused on Boruto’s younger sister Himawari. In this episode, Himawari, who is still not sure if she wants to be a ninja or not goes to the ninja academy for some First-hand experience. The Girl has big hopes for her future.  During the first-hand experience, Himawari comes across a kid named – Ehou. Ehou mocks Himawari because unlike Himawari, he has decided to become a ninja in the future. Whats happens next? How Himawari deals with this guy? Watch Boruto Episode 154 to find out.

Boruto Episode 155 is titled, “A Rainy Day for Mitsuki”. As for the release date and time, the anime was on indefinite hiatus just like Black Clover and One Piece anime. But, Now We have the latest updates and all the information.

You can watch Boruto episode 155 and all other episodes online officially on Crunchyroll. We highly condemn the use of streaming anime or reading manga on an unofficial website. You can read more about Anime streaming websites here.

While you wait for Delayed  Boruto Episode 155, make sure to read our recent on : Boruto Chapter 48 Release Date (Delayed?)

As the name suggests, the episode will be focusing on Mitsuki. The upcoming episode Mitsuki will be seen with his cat – Mikazuki. Yeah, it seems like Mitsuki likes animals a lot. Remember him having snakes in his sleeves? While hanging out with his cat, Mitsuki comes across an injured man and helps him out.

Moreover, it seems that the man really likes Mikazuki. Meanwhile, team 7 gets a new mission. A mission to protect the president of a company with the local police department. A serial killer ‘The Bloodthirsty killer Rain” is after the life of this president. However, the president says he doesn’t know anything about what’s going on. Moreover, he tries to refuse to be protected.

Synopsis for Boruto EP #155: “A Rainy Day for Mitsuki”- Mikazuki will be making an appearance, & Team 7 will be heading out for another escort mission!

Broadcast is slated for 5/3~

I’ll check Animage and Newtype Magazine for more EP details later this week when I’m not as busy pic.twitter.com/ESmh8fRWe6

Moreover, the manga readers are excited that the story finally connects to Manga. As of now, the anime has aired 153 episodes and Episode 154 will be out on 26 March.

Bushiroad will announce “Joran: The Princess of Snow and Blood” Original...