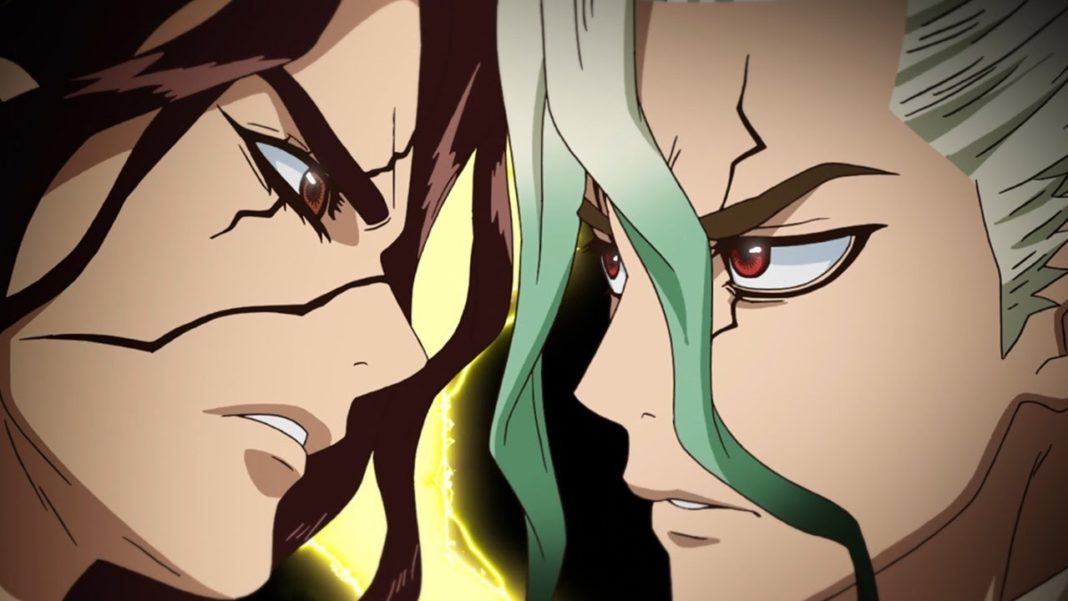 If you are keeping up with Dr. Stone Manga, then you must be as excited as everyone for Dr Stone Chapter 141. The manga started gaining traction as soon as it got an anime adaptation. With beautifully drawn characters and amazing plot development, the manga is currently one of the most popular franchises.

The previous chapter begins the “Truth of the Petrification Saga” arc. Right after the release of Chapter 140, readers are looking forward to reading Dr Stone Chapter 141. This arc will supposedly reveal the major secrets behind the cause of Petrification.

Before starting with the discussions of Chapter 141, let us first discuss the events of the previous chapter:

The previous chapter was titled, “New-World Pilots”. As for the events, the plot of this chapter revolves around the preparations for the Moon-Landing Project. Yes, you read that right! Senku and co. will be traveling to the moon in this arc.

Chapter 140 was quite a short chapter, the chapter is now building up material for the upcoming chapters. Soyuz can not revive his father so he has now become the new leader of the Island. Moreover, Soyuz is going to stay on Treasure Island, so he can free every islander from stone with the revival fluid.

Dr. STONE, Ch. 140: Senku’s new goal may be his craziest yet! Is he aiming too high? Read it FREE from the official source! https://t.co/nDdA6SfGWD pic.twitter.com/XL3nuEMqNR

Soyuz sent Kirisame with Senku’s group to collect the materials for the preparations of flying to the moon. The chapter ends with Senku planning to revive the strongest primate High Schooler, Tsukasa Shishio.

The chapter revealed Senku’s plan to revive more important people. Now then, Senku and co. have acquired platinum, they can create revival fluid in mass. New characters will soon get introduced in the manga.

The manga, Dr Stone 141 will revolve around the revival of Tsukasa, the introduction of a new character is highly expected in chapter 141.

It’s been a while since we saw Tsukasa in action, seeing the strongest primate highschooler as the fighting lead of Senku and co. is going to be fun for most fans out there. Hyoga has been missing since he got a hole in his body, but considering the non-negativity, this series has to offer. The stone should heal him regardless of his injuries.

There have been various trending theories and predictions on the internet regarding Dr Stone manga Chapter 141.

While you wait for Dr. Stone 141, make sure to read about Black Clover Chapter 241, Demon Slayer Chapter 196, My Hero Academia manga delay, and Attack on Titan’s chapter 127.

According to our sources, the 140th chapter of Dr. Stone manga got released on Shueisha’s Weekly Shounen Jump Issue #12 which aired on 23rd February 2020.

So, Chapter 141 for Dr Stone manga is going to release in Shueisha’s Weekly Shounen Jump Issue #13. As for the release date, chapter 141 will be out on or around 1 March 2020.

According to the spoilers, Senku talks about the battery of the Petrification device’s battery. While using it on Tsukasa, everyone else tries using the remaining energy in the petrification device. And, then Tsukasa gets revived. The 141st chapter of Doctor Stone ends with Senku’s roadmap to create spacecraft. Moreover, the chapter features a color page for the 3rd Anniversary of Dr. Stone.

The chapter did an amazing job of creating hype for the upcoming arc. The series will now begin.

The spoilers and leaks are basically the raw scans, that are being translated by the popular translators on the internet. But you may not worry, we will make sure to add the leaks and spoilers to the article, as soon as they’re out. You can put your opinions regarding Dr Stone Manga’s chapter 141 in the comment section below.

When will Dr Stone Chapter 141 air?

Dr Stone manga is currently following the Medusa arc, The manga series started back in March 2017. Written by Riichiro Inagaki and illustrated by Boichi. Here is the trailer for the anime adaptation of the manga-

Well, that’s what we have for now. Thanks for reading! Also, Make sure to follow our Social media accounts for exclusive news, spoilers, and everything anime related. Don’t forget to read more about Dr. Stone Season 2.

Haikyuu Chapter 387 Release Date, Spoilers And Where To Read?