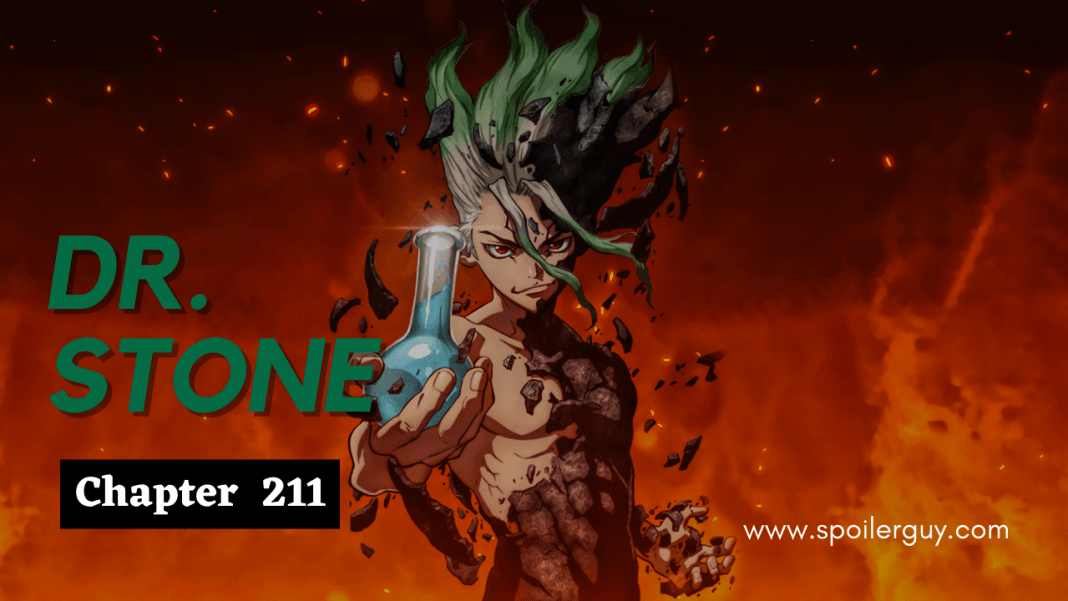 Dr. Stone Chapter 211 continues the preparations for a trip to the moon, with Suika and Chrome working on the newest research projects with the rest of the Science Kingdom Crew. Dr. Stone exposes the conflict between opposing scientists Senku and Dr. Xeno, who aims to fight on the moon. We’ll speak about Dr. Stone Chapter 211 release date and time, leaked raw scans and spoilers, and official sites where you can read the latest chapters legally and for free.

Dr. STONE, Ch. 210: The harsh reality of the moon mission being a one-way trip is starting to set in on everyone. Read it FREE from the official source! https://t.co/EplX4HErNh pic.twitter.com/HD23tSDRDc

The group tries to figure out why a human would petrify oneself on the moon and the rocket they are about to build, based on the recent Dr. Stone. They understand that the rocket is a one-way ticket to the moon and that it may not return since it will be destroyed once it lands. Suika knows that the men heading to the moon will not notice them until the rest of the team arrives to resurrect them.

The team has started working on the rocket, while Sai is working on a computer. Kaseki is collaborating with another team to melt the pebbles into aluminum. Senku demonstrated how to work with the crew and drew a map for them. He discloses the materials used to make the rocket. Gen, Kaseki, and Koharu are relieved that Senku’s presentation is simple, but they know it will require hard work and patience. Gen is working on the electrical section and analyzing the measures he has to take.

Z=210 spoilers ahead
.
.
.
.
.
I'm touched by the lenghts Chrome and Suika are going to help the Rocket Trio, but I feel kinda meh about the idea of having a quick safe plan for the struggle presented just the chapter before. I feel like Dr STONE needs more serious tension. pic.twitter.com/R49flijiP0

Also read: Top Anime to watch if you like That Time I Got Reincarnated as a Slime

What to expect from Dr. Stone Chapter 211?

Chrome, Suika, and Sai will collaborate on the return expedition in Chapter 211. They’ll obviously attempt to keep this a secret from Senku until the project is finished.

Pacing is still a bit all over the place but I liked this chapter. Both teams now have goals and plans. It'll be cool seeing how each plan works out. Hyped for this even if the pace has ruined some of it. #DrSTONE pic.twitter.com/1eGMemU1vB

As you may expect, building a return vehicle will require a significant amount of resources, similar to that required for the rocket, as well as hours of computation to assure a safe return to Earth.

Fans will witness one of the most essential aspects of Senku’s strategy in the next chapter of Dr. Stone. The rocket-building process will eventually be completed. The crew is now preparing to launch the rocket for a test flight. Before embarking on the mission, Senku and his think tank will assess the weather’s appropriateness. As a result, the rocket to the Moon will finally lift off in Dr. Stone Chapter 211. Senku and his crew will arrive on the planet and begin the next phase of their mission.

Also Read: Anime Shows that are Similar to The Rising of the Shield Hero!

Meanwhile, Chrome and Suika will go on a mission to build a return rocket on Earth. They’ll start by collecting all of the required raw materials, such as aluminium and copper. They will later seize all of Senku’s rocket-related expertise. He’ll give them the blueprint for building the rocket before he goes. As a result, the new chapter will begin with two missions, one on the Moon and the other on Earth.

That’s all about Dr. Stone Chapter 211. For more updates stay tuned to Spoilerguy.