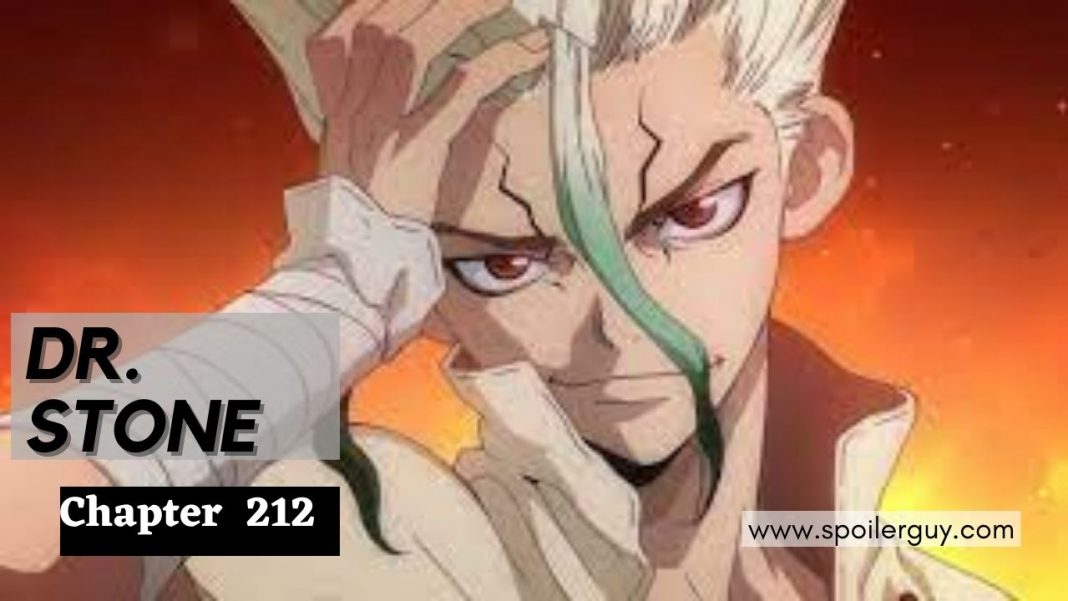 Dr. Stone Chapter 212 continues the globe tour for resources, with the scientific Kingdom team acquiring materials all around the world. In Dr. Stone’s latest chapter, the journey to the moon continues. According to the most recent Dr. Stone Chapter, the unit’s next stop will be Indonesia, where they will gather all of the materials needed to create a rocket.

Senku’s crew is relieved to have landed at a rubber-tree-rich jungle. For their next scientific experiment, they begin collecting water from the rubber trees. Later on, the group learns they’ve discovered Rubber City. Corn City, Fluorite, Math, Aluminum, Superalloy, and Rubber City are among the places they’ve visited.

strongly believe dr. stone should have a scuba diving filler chapter or something pic.twitter.com/pqdmF4tQ4k

Kohaku knows she’ll be meeting with Ruri and the rest of the villagers, and she’s excited to share the good news with them. Senku feels Ryusui’s suggestion concerning souvenirs is a nice one. The crew discussed all of the wonderful things they enjoy on the islands, as well as what motivates them to bring everyone back to life. Chelsea adds that they might try introducing individuals to different foods to pique their interest. Chelsea, according to Kohaku, is looking for delectable dishes. Ryusui adds that he, too, wishes for it. Francoise inquires about the food of Japan.

Rice is Japan’s comfort meal, according to the crew. Ryusui and his colleagues went out to gather rice. Rice is harvested in April, following the rainy season, which is the time of year for them to accomplish it, according to Francoise. A math project is being worked on by Sai, Chrome, and Suika. Kaseki is working on what Senku instructed him to do. They were able to construct a machine that assisted them in replanting rice crops. Gen assumed that they would wait until the following year to sow rice crops.

Senku responds that since there is no winter in this location, there is no ten billion percent to do so. It’s because the location is so near to the equator, Gen realises. Kohaku is perplexed as to how this place manages to avoid the cold. Senku informed the two that if they planted rice crops three times a year, they would have a good yield.

Ryusui believes that each harvest will leave the land less fruitful, but that things will turn around if they use high-quality fertiliser. Francoise remarks, as she usually does, that desire is honourable. Senku responds that they must thank science’s strength. Ukyo and his crew are working on a Pink Rock project, which they claim to have sourced from Naru Island.

To finish their experiment, they mixed wood ash, nitric acid, and phosphorite. Later, the team got rice with the help of Kaseki’s equipment. Senku and his companions are relieved that the rice is similar to those found in Japan. Rice is a favourite food of the Science Kingdom crew.

Senku and Ukyo reflected on the past and stated that it was time to return to Japan, where their adventure began. After two days, the squad will be in Japan, and they have already left.

Also read: Top Anime to watch if you like That Time I Got Reincarnated as a Slime

That’s all about Dr. Stone Chapter 212. For more updates stay tuned to Spoilerguy.