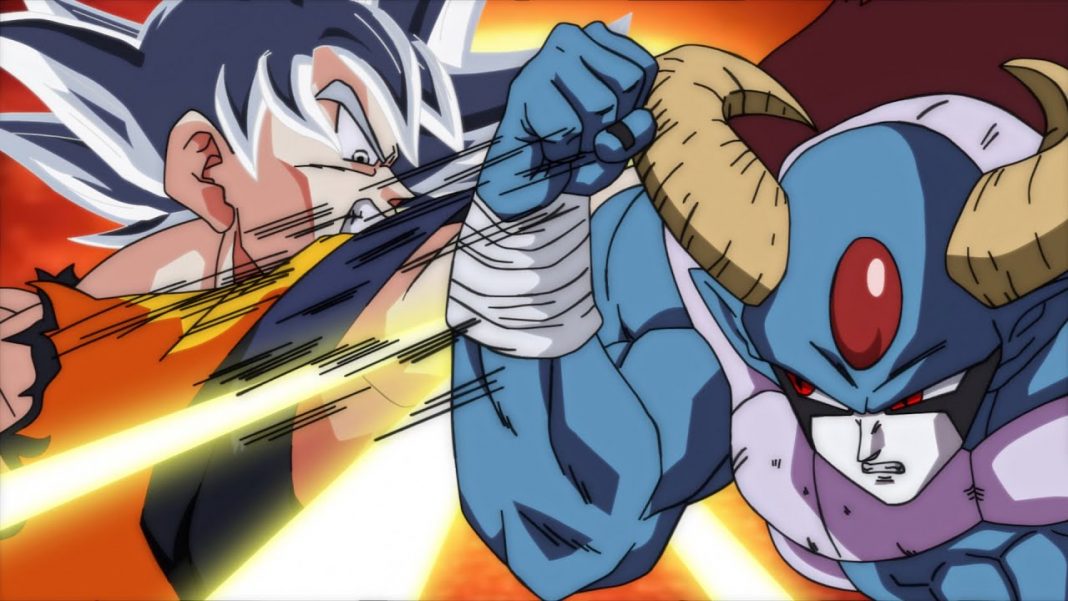 Dragon Ball Super Chapter 66 is the continuation of the story. At this point, killing Moro means destroying the planet Earth itself. Moreover, if Goku doesn’t hurry, Moro’s swollen energy will cover the entire Galaxy. In DBS Chapter 66, Goku needs to figure out a way to defeat Moro without destroying the planet.

Dragon Ball Super has proven yet again how the franchise is the most popular of them all. The recent chapter of DBS manga got out on the official website of VIZ. Due to high traffic, the website ended up crashing. This is accurately where we say, “This is the power of Ultra Instinct.” There are high chances of fans overwhelming the website for Chapter 66 of Dragon Ball Super manga too.

Out of curiosity, fans have been looking forward to the release of DBS manga, chapter 66. In this post, we will be including the release date and time as well as some early leaks for the upcoming chapter of Dragon Ball Super manga.

Before we start, how about we have a quick look at the events of the 65th chapter? In such a way, you can comment with your opinions on the same. So avoiding any further stays, let’s get started –

Chapter 65 of DBS manga was titled, “Son Goku, Earthling.” And, yet again, Goku has done something he shouldn’t have. I agree with how this will turn out to be a great chance for Vegeta and other Z-fighters to have a large contribution to Moro’s defeat. However, there will be further casualties in this fight. But, in the end, we all know this is exactly how Goku does things.

After Goku defeats Moro in Chapter 64, it seemed the arc is finally reaching its climax. Despite the events and betrayal, Goku has faced in the Z saga – he makes the same mistakes repeatedly. He first tries to spare Moro exactly the way he did to Frieza, and now the worst of them all, he gave a Senzu bean to him. The first page of the previous chapter was enough to tell how Krillin must have felt.

Overall, the chapter has followed nothing new. At this point, the same old thing keeps happening time and time again, and that too with the same old results. This arc could be different if someone else gets the chance to have the limelight in this arc; it could be Vegeta or any other character. But, the series has been “Goku-centric” before we knew. So, even if a character gets to shine during this battle, the result will be the same.

What makes up for the repetitive plot work is the plot derivation and amazingly explained power differences. Moreover, the choreography in this arc has been outstanding up to this point. Vegeta might get a chance to shine in this arc.

Another explanation for Goku giving the Senzu bean to Moro is the confidence Goku had in the victory. The same thing has happened in the Cell-saga. Goku knew that Gohan is strong enough to take Cell down. I hope this must have been the case. Well, whatever it turns out to be, nothing beats the expectations we have for Dragon Ball Super chapter 66.

So after the anime, now even Dragon Ball Super manga is crashing websites.

Viz went down due to high traffic from new DBS chapter and that's the power of Ultra Instinct🔥 pic.twitter.com/jaym8wFI1n

First off, where do I start? The chapter itself plays an essential part in this arc. The events of DBS Chapter 66 will surely give us a hint on how Goku and co. will be separating Moro from Earth and defeat him. Soon enough, if an entity like Zeno appears, the arc might get the same feeling as that of the Goku Black arc.

Vegeta’s New Form or Technique in Chapter 66 of DBS Manga?

It sure has been a while since readers got to see a Vegeta-centric chapter. At this point, everyone’s wondering about the new technique. Vegeta has been training with the Yardrat for the past few chapters. The creator might have planned to give this opportunity to Vegeta from the beginning. A special move that allows Vegeta to undo Moro’s absorption and hence Goku and co. can take him down. This is the only opportunity the creator can provide Vegeta to play an essential role during this fight. Well, let’s hope for the best and look forward to Dragon Ball Super Chapter 60.

The last page of the previous chapter did confirm it for us. Dragon Ball Super Chapter 66 will release on 20 November 2020. The manga will be made available online and offline platforms by then. We keep adding information regarding the ongoing anime and manga on our Twitter account. For such anime-related info, make sure to follow us on Twitter for exclusive updates on Dragon Ball Super 66.

Are there any delays in the releasing schedule of Dragon Ball Super manga?

Nope, as of now, there have been no delays announced. However, if there comes any delay or postponement – we will inform you and update the information on this article. So, Dragon Ball Super 66 will be released as per the given schedule!

Will the Manga Sales affect the anime continuation?

It surely will. Anime or Manga, both of these are part of the same franchise and hence, interconnected. Back then, the anime did not have a plot to follow. However, there is more than enough plot for the franchise to introduce Dragon Ball Super Season 2.

All the previous chapters of DBS manga are available online and offline. As for the upcoming chapter, you can read DBS Chapter 66 for free online on Viz. The next chapter will be out in next month’s V-Jump magazine, as well. A translation for this chapter in Espanol, English, and other languages will be available on the same platforms.

Note: We highly condemn the usage of piracy to stream anime or read the manga.

Currently, the raw scans for the upcoming chapter of DBS manga are not available. However, if there comes any update regarding the raw scans, we shall be the first to bring the translations.

Suppose you’re looking for an air date regarding the spoilers of Dragon Ball Super chapter 66. Then, they will be available on 15 November 2020 on our Twitter account – @Guy_Spoiler.

Like every other time, we are here with the spoilers for the upcoming chapter of Dragon Ball Super manga. So without any further ado, let us get started –

We only got a few leaks as of now, and as per those. Whis was able to overpower Moro like it was nothing. This clearly explains the power level of Whis. The entire chapter revolves around Whis, Beerus, and Vegeta. Maybe, it’s time Vegeta actually comes up with something that brings attention to him.

You can read the raw scans of the Dragon Ball Super manga’s chapter 66 online here.

Well, that sums it up. That’s what we have for now. Thanks for reading! Stay tuned.