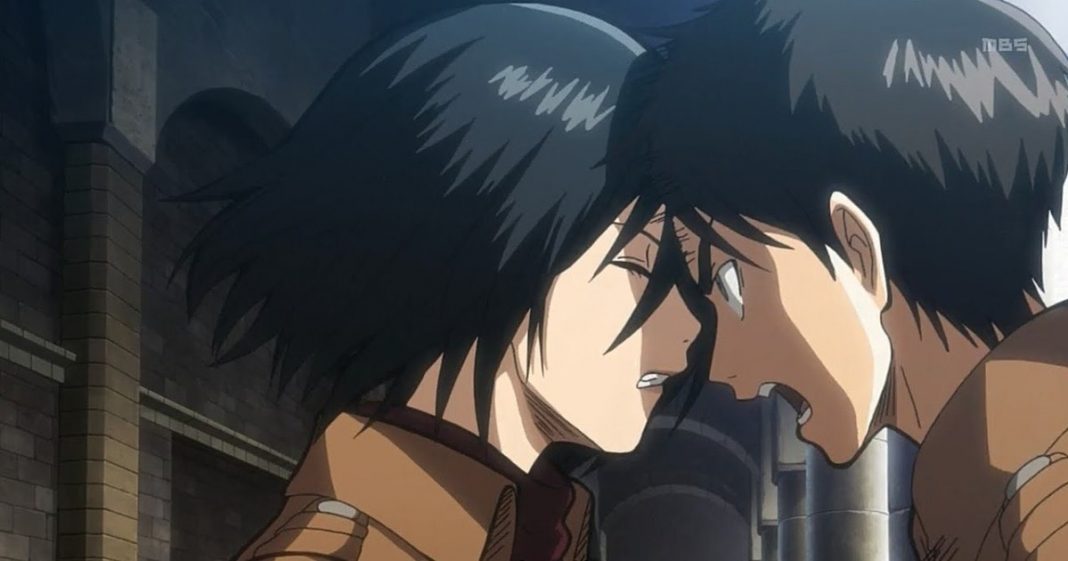 Now that Attack on Titan has reached its last season, everyone is excited about the ending. One of the most asked questions is how it will end for Mikasa and Eren! Eren has a history of saving Mikasa since her childhood. When Mikasa was abducted, and her parents were killed. It was Eren who rescued her unknowingly. After that, Mikasa was adopted by Eren’s parents, and they have an unbreakable bond.

Undoubtedly Mikasa and Eren shared a bond and made a promise to protect each other. Mikasa has always been aside from Eren, even when he suddenly turned into a Titan. They have been there for each other in the darkest of times. But can we find Eren and Mikasa as a couple at the end of the anime?

Read: Why did Eren Laugh at Sasha’s Death?

There have been chapters where the manga had given hope for the ship of Eren and Mikasa. For example, in chapter 130, Mikasa was about to pre particular death kisses. But somehow, Eren missed it in the end. We have come across situations that might prove that the relationship between Eren and Mikasa is one-sided. Mikasa has feelings for Eren, but she was more of a family than a lover for Eren.

Will Eren fall for Mikasa?

Mikasa has intense feelings for Eren. In the recent episodes when Eren was insulting Mikasa. Armin wanted to intervene and stop them from further ado. But in the process, Mikasa became angry and fought Armin. It can be because Mikasa cannot disobey to turn against Eren. Furthermore, Eren explained it since Mikasa has the blood of the Ackerman clan. She can’t break or deny Eren.

Previously when Eren asked Mikasa an honest question that “What am I to You?”. To which Mikasa replied, “You are family.” Mikasa refused to be frank with Eren.

In the previous chapters, we have learned that the Ackerman clan is considered an upper class as an experiment on the Eldian blood. The blood of the Ackerman clan may not have the potential to turn into Titans. But they can have the same durability, strength, and speed as a Titan.

In chapter 112 of Attack on Titan manga, Eren has revealed that Mikasa’s soft spot for Eren is not because of her feelings But due to her lower bred. Further, the kind nature of Mikasa is due to her lower breed, which is meant to protect the progeny of Eldian King or an instinct she is born into or transferred. In other words, Eren says that she has no feeling for his adopted sister but hatred. These words did hit her hard. But yes, Eren has said these words. Therefore, expecting them to fall in love after all this may sound bizarre.

After all this insult, her actions were still the reverse of what we expected. Armin wanted to fight with Eren for leaving Mikasa with such serious accusations. But Mikasa intervened in their fight and stopped Armin from trying o put up a brawl with Eren.

This scene between Eren and Mikasa in Attack on Titan was cute as hell pic.twitter.com/jHmrG8t8Yo

There were many whom Eren had inspired to join the Survey Corps. Everyone used to think highly of Eren, but then he showed a different side of him. He had slowly turned himself into a monstrous. The reason behind it is unknown. But fans are eagerly waiting for Eren to disclose the reason behind his change.

Historia has saved Eren’s life, forgetting her own desires and the yearning of the entire world. Also, Eren had to hide one of his discoveries to save Historia. There’s an assumption that Eren started the rumbling to protect Historia and the paradise island. Eren respects Historia, and they respect each other. But if you want to know if Historia is Eren’s love interest, we have to wait till the end to find that out.

Mikasa and Eren have cried together and stayed by each other’s side. But as for their romantic relationship, the chances are rare. People have been shipping Eren with Mikasas as well Eren into Historia. But to know if any of the two works up in the end, we need to wait for the manga’s last two chapters.

Man… just the fact that these two had to deal with shit like this as kids is truly insane. Eren and Mikasa legit killed these scumbags at such a young age. Isayama wasn't playin' around. The world is cruel. And that is a huge message in Attack On Titan. https://t.co/oHNNksIsyv