Spoiler Guy
Home Theories Eri’s Quirk True Extent! Will it be Useful to Lemellion in My... 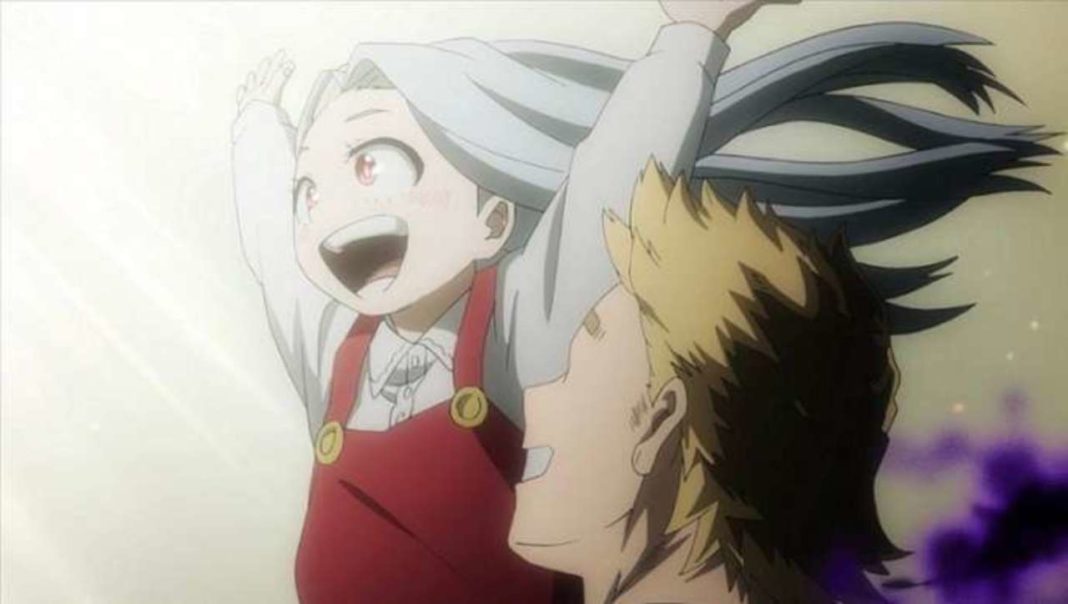 One of the biggest mysteries in Boku no Hero Academia is Eri’s quirk and the extent of her powers. My Hero Academia is currently whooping up some amazing content for us weebs. Every character in this anime has enormous potential making us think of various speculations to go with the plot. Eri is a character that has tremendous potential and can change the course of the entire anime. In this blog, we have included everything you need to know about Eri’s quirk and its True potential.

Who is Eri Chisaki? And What is Eri’s Quirk?

Eri Chisaki is the granddaughter of an underworld criminal who ran an organization called The Shie Hassaikai. She was under the supervision of Kai Chisaki who was the leader of the organization. Eri was used as a resource in a project that was used to create a serum that would erase a quirk and an antidote that would restore it. The aim of the project was to erase hero’s quirks and later demand money for the antidotes.

Eri faced a terrible past which leads to her becoming mentally unstable. Eri’s quirk holds great power of rewinding people’s bodies to their past state, a powerful yet unstable quirk. The heroes fought a great deal to save her from Kai Chisaki, Lemillion lost his quirk, Sir Nighteye passed away due to fatal injuries and many other heroes were injured badly. Currently, Eri is under the supervision of Eraserhead who is shown to have controlled her.

Nieto Monoma known as the phantom thief uses his quirk ‘Copy’ to help Aizawa. When Nieto Monoma copies Eri’s quirk he is unable to use it. This brings about a theory that her quirk is based  on accumulation. In order to use ‘Rewind’, Eri would have to accumulate enough power in advance .

Also, Aizawa takes it upon himself to train Eri, to which All Might agrees and offers to help as well. Eri would become a valuable asset to the hero association if she learns to handle her quirk. Especially since All Might and Aizawa are the ones mentoring her, there is no doubt that she will succeed.

The reason why we consider Eri as a valuable asset is that she is our current hope in restoring Lemillion’s quirk. Lemillion had lost his quirk while protecting Eri from Overhaul. It would only be fair on her part to do Lemillion a fair and return his quirk back to him.

The manga has reached a point where Lemillion is about to graduate and its been 3 months since Aizawa and All Might told they would train Eri. But we shouldn’t forget the fact that Eri is currently a 7-year-old girl and cannot undergo intense training.

If we consider all possibilities, it might be possible for Eri’s quirk to restore All Might back to his previous form. It was predicted by Sir Nighteye that All might would die in the mere future. But as Deku proved Sir Nighteye wrong by changing his own destiny, there might be a reality where All Might is healed by Eri.

This highly unlikely incident might take place in an event where Deku is immobilized and all hope is lost and All might is the only one with enough experience to step into battle. This scene would go down as one of the best scenes in anime history.

[via My Hero Academia] pic.twitter.com/a9SWyks2ZI

Eri can be useful in many ways in the future if she manages to successfully control her quirk. She could stop the villains without any fighting or destruction by just touching them. This would avoid several civilian casualties and save heroes from dying in battle. For all its worth, she might be the pinnacle in stopping villains.

We included everything we knew so far regarding Eri’s quirk, if there is any other information then we will make sure to update the article.

My Hero Academia is a Japanese shounen manga series written by Kōhei Horikoshi. It is superhero anime with jaw-dropping fight sequences combined with top-notch animations. The story revolves around a boy named Midoriya Izuku who is born without a quirk in world where most people have quirks. He idolizes All Might who is the symbol of peace and is considered the No.1 hero of all time.

All Might one day finds young Midoriya to be worthy of his Quirk due to his determination to save people. So he passes his quirk onto him in all hope to make him the next symbol of peace. Young Midoriya joins the U.A high school to become the No.1 hero of all time. Here is the trailer for My Hero Academia anime –