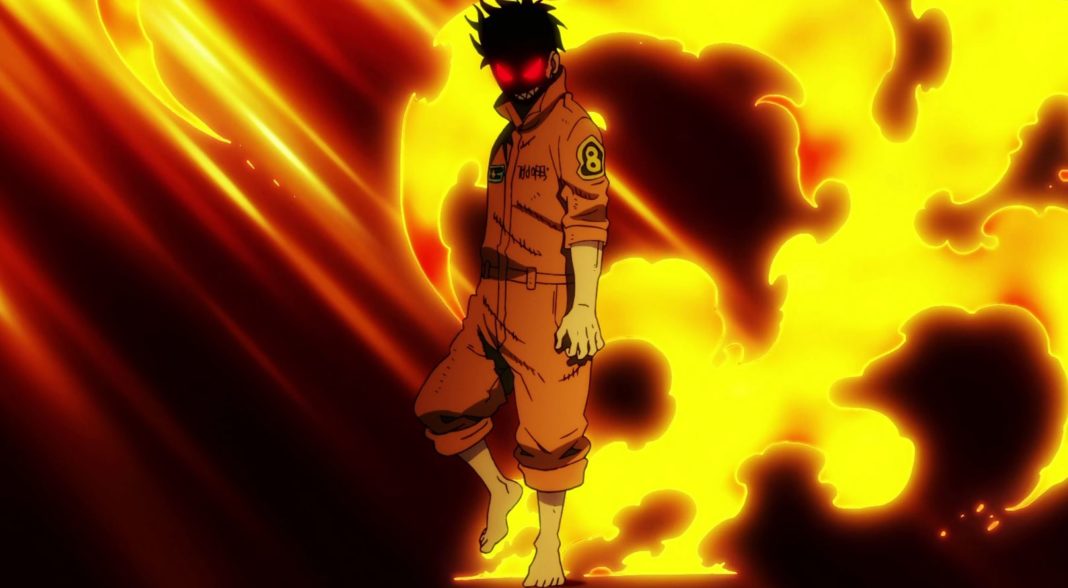 Fire Force (enen no shouboutai) is an anime that revolves around the basis of fire fighting. But the characters in this anime fight against infernals (fiery-burnt beings). Things start to get serious when the captain of the fire force company 8 and Shinra suspect the spontaneous human combustion to be man-made.  Shinra intends on putting a stop to this by solving this mystery. This anime is one of the best animations you will see and is full of surprises and will keep you intrigued and wanting more. The sound effects in this anime are what will catch your interest.

In this anime, The main protagonist is ‘Shinra kusakabe’. Shinra is a third-generation pyrokinetic ( can produce and manipulate fire). He produces a large amount of flame from his feet. He lost his mother and brother in a fire due to an infernal or so he thought. Shinra becomes a fire force member at the 8th fire force company in order to find out the reason behind these spontaneous human combustions. And also the real cause for the fire behind his mother and brother’s death. Shinra slowly makes friends and finds people to help him with his quest.

He joins forces with the captain of fire force company 5. Later goes for investigation purposes to fire force company 1 and uncovers a great secret. A member of the fire force company creates artificial human combustions and also kills children for his trials. Shinra fights an amazing battle with him but later a member of the white-clad kills their lead. Due to this incident, Shinra earns the respect of company 1 and sets on a journey to uncover the mystery of man-made human combustion. On this journey, he learns how to control his fire properly. He later joins forces with company 7 and gets closer to his goal and also encounters a traitor which gives him a valuable asset but bad news as well.

It turns out that his brother is still alive and works for the evangelist who is the root cause for the making of artificial infernals. Shinra later finds out that he posses something called the “adolla burst”. He also learns that he can connect with his brother through “adolla link”.

What Is “Adolla Burst” And “Adolla Link”?

History Behind The Adolla Burst:

To keep it simple “adolla burst ” is a sacred flame that destroyed the world in the fire force universe. It is called the ‘great disaster’, it burned the earth leaving only a few survivors. Raffles -l is one of the few survivors who found the adolla burst and turned it into a thermal plant called ‘Amaterasu'(unquenchable flame). He later uses this to provide energy for the world.

There are eight third-generation pyrokinetic that use adolla link and can connect to the adolla realm.out of which six are known. few of them work for the evangelist under the name white-clad. These members can activate the unique flame -‘adolla burst’ and can establish adolla link with the evangelist and the adolla commonly called -‘HELL’.

Raffles-1 who created the holy-sol temple calls the adolla burst a pure flame. This was used by the hands of God to create the world they currently live in. Regardless of it being the cause of the eradication of the world and the spontaneous human combustion.

The adolla burst is something that is considered to be unique in nature but is still not proved to be any different from a normal flame in the anime. The evangelist may be the answer to this question as he is the one who is in pursuit of the adolla burst.

The adolla link also has other aspects as well. When Konro asks Shinra to save Benimaru  Shinra was alerted by a tingling sensation in his feet. Shinra feels the same effect when Dr. Giovanni tries to kill Vulcan. The user also uses the adolla link to share emotions. This happens in the fight between Sho and Shinra. Shinra shares his childhood memories with Sho in order to show his love affection. They both enter the adolla realm where Sho witnesses his own memories which he had forgotten. All this takes place due to the possession of the adolla link.

What Happens When a Pyrokinetic Without The Adolla Burst Tries To Reach An Adolla Link?

The captain of the fire force company 3 sees a bright light when he an infernal scratches his face. He also becomes spiritual later. A similar incident happens to captain burns.  Captain burns encounter a demon when saves little Shinra and he goes to the adolla realm for a short period. He loses his eyesight in his right eye due to this incident (constant fire keeps burning in his right eye)

Adolla- Adora-hell (literal translation ). We can see the adolla realm in many scenes. when captain burns try to save kid Shinra. Also when Sho and Shinra fight, they show it a few times. The adolla link is undoubtedly associated with the adolla realm. They show the adolla as a blackish-grey place with black fires burning around with skeletons in the ground. The insects which cause spontaneous human combustion might be from this adolla realm.