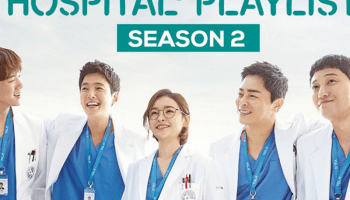 This K-drama revolves around a group of five friends who are doctors. They share the same passion for music and enjoy each other’s company. However challenging their work-life is, they don’t fail to have each other’s backs and relax together. This K drama is focused on the doctors’ sincerity in their work and their relationship with the patients.

Lee Ik-jun (Jo Jung-suk), Ahn Jeong-won (Yoo Yeon-Seok), Chae Song-Hwa (Jeon Mi-do), Yang Seok-Hyeong (Kim Dae-Myung), and Kim Jun-wan (Jung Kyung-ho) are the five friends of the Hospital Playlist. The supporting actors and guest stars did a fabulous job. All of them were charming and talented. They all could not have put on a better show. The views shot sky high during the lockdown across the globe. With such a talented and professional director and an amazing cast, this drama totally knocked our socks off.

What to expect from Hospital Playlist Season 2?

Fans across the globe are waiting to sit on the sofa, grab a packet of chips, and binge season 2. Various accounts on various social media platforms such as Instagram, Facebook, and Twitter have begged for season 2. Well, director Shin Won Ho will be returning for the second season. He directed some of the most popular Kdramas, such as Reply and Prison Playbook. He is known for the success of these amazing Kdramas.

We can assume that Netflix will receive episodes of Hospital Playlist alongside the Korean broadcast, which means we could see season two on Netflix soon! In the Hospital Playlist’s finale, Ik Jun finally gained the courage to confess his feeling for Song Hwa.

Before Song Hwa can decide, Ik Jun tells her she can take her time with her decision, just as he leaves to go to a conference in Spain. Jung Won finally made his decision to stay at the hospital. In the process, reciprocated the feelings of Dr. Gyeo Wool, he finally confessed her love to him. Seok-Hyeong decided to stay at the hospital rather than to take over his father’s company.

The outbreak of COVID 19 sure did slow things down and stood as a risk. However, it is K Dramas such as these that keep us going. Let’s keep our fingers crossed and wait patiently for season 2 of this phenomenal K Drama to release.

Hospital Playlist takes a turn from the usual K dramas that are there. The usual ones tend to focus on love triangles, jealousy, and revenge. This K Drama involves comedy, friendship, music, and seriousness of one’s job. The first episode of Hospital Playlist was released in March 2020. There are 12 episodes which are around 1 hour 30 minutes, and the last one came to about 2 hours.

The director of this different and mind-blowing K drama is Shin Won-ho. The scriptwriter – Lee Woo Jeong, did an amazing job. This K drama was rated 9.1 by MyDramaList and 8.7 by IMDb, which is fairly good. This K drama was widely accepted and thoroughly enjoyed by K drama fans across the globe.

That’s all for today guys on Hospital Playlist Season 2 Release Date, Spoilers, and Preview. Hope you guys enjoyed it. Have a great day.