Spoiler Guy
Home Discussion Is Kurama Alive? Will Naruto Get Kurama Back? 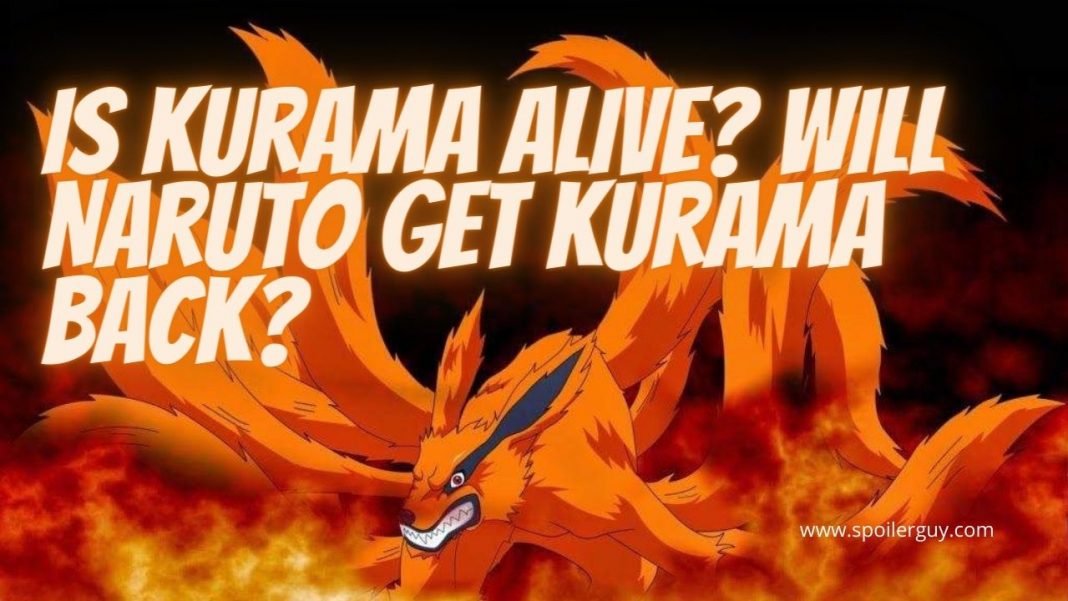 Naruto fans are curious about the return of Kurama in the manga series after viewing the current Boruto anime episode. So, without further ado, here’s everything you should know.

When the nine-tailed fox, Kurama, gave his life to give Naruto the best possible chance against Jigen, his admirers were understandably upset. Of course, it was quite disgusting to see Naruto thrash his opponent in Baryon mode. Not one single Naruto fan, on the other hand, was ready to say goodbye to Kurama, who had paid the ultimate price for Baryon Mode’s sins.

Kurama, why you gotta die looking all cool and chill damn 😭 pic.twitter.com/ntfMH8KFnH

Even before the Boruto manga started, the whole Naruto community was anxious about his demise, but we never considered Kurama’s, and now we know what will happen. Kurama, Naruto’s Nine-tailed fox companion, died in Boruto: Naruto Next Generations Chapter 55 when Naruto and Kurama utilized Baryon mode against Isshiki Ohtsutsuki and spent too much chakra.

Despite Naruto’s belief that he has died, Kurama assures him that his time hasn’t come yet in the opening scene of Chapter 55. The Kyuubi, on the other hand, is an exception. The implications of Kurama’s statement have astonished and grieved Naruto. When Kurama informs him about the deception, all of his fears come true.

For the record, I never lied to you once. I never said you’d die, and I’ll never say it again. As soon as I said power came with the risk of losing my life, you would have reacted suspiciously.”

“Kurama is no longer with you” pic.twitter.com/c0FkGP3IyS

Unfortunately, I must say that I completely concur. It’s possible that Sasuke, Boruto, Kawaki, and Kurama would have all lived if Naruto hadn’t employed the Baryon mode knowing that his partner was in danger.

The chapter’s closing panel also depicts Isshiki’s second vessel, Code. Not only did Kurama die, but Sasuke also lost his Rinnegan as a result of this.

What does Naruto’s strength level look like now that Kurama is dead?

Because of this, Kurama’s death has had a profound effect on the whole shinobi community, not just Naruto. We have peace today because of the role Naruto played as a “War Hero” and “The Strongest Shinobi,” which he held.

It took just one Hokage, Hashirama Senju, to capture all nine-tailed creatures and give them to neighboring villages, ensuring that the balance of power remained intact and that everyone agreed with his policies. After he died, though, things began to shift. Even among the clans that belonged to the same secret village, suspicion started to grow under the reign of Tobirama Senju.

If word gets out of Naruto’s defeat, the same thing will probably happen. Naruto is no longer the strongest shinobi, regardless of how great he becomes in the future. However, if Naruto masters his sage mode and the Yin Yang chakra was given to him by Hagoromo Ohtsutsuki, the situation may change. Either that or Kurama makes a comeback.

So Kurama died, Naruto lost his super human chakra , he can’t perform Jutsu like before,…. A fight till death , who are you placing your bet on?

So Aang. Vs. Present Naruto pic.twitter.com/iyP9hCXnW1

What Are the Odds of Kurama coming back to life?

Although it’s too soon to rule it out, Kurama’s prospects of resurrecting are very slim. On the whole, the Jinchuuriki dies when the Biju of a Jinchuuriki is withdrawn; however, in Naruto’s instance, Kurama had just gone and that was the reason Naruto had survived entire experience.

“I hope kurama comes back one day”

Kishimoto who is literally known for killing off beloved characters: pic.twitter.com/wy9XTxS3hu

The Baryon Mode ate Kurama’s life-force chakra, according to the nine-tailed fox. So, if Kurama returns, there must be some remaining portion of his Chakra. However, Naruto would have sensed his Chakra if that were the case, and he hadn’t until now. The Boruto manga, on the other hand, is still continuing, so anything is conceivable. When the manga reaches its conclusion, maybe Ukyo Kodachi and Masashi Kishimoto will bring back the nine-tailed beast.

This is all about the death of Kurama. The article will be updated in case of changes. Till then stay tuned to Spoilerguy.