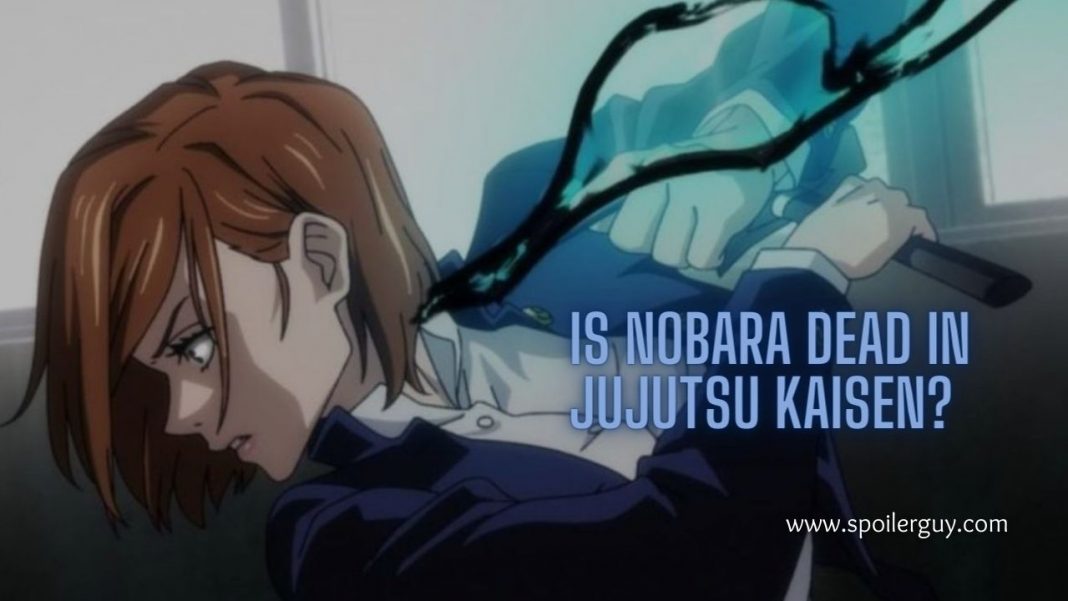 Nobara Kugisaki is one of the strongest female characters of Jujutsu Kaisen. From the very first scene, her character has attracted a lot of attention. Her sense of pride as a fighter as well as not letting anyone influence her actions is very impressive. However, in the recent chapters, there have been a lot of assumptions arising on how will the journey end for Nobara or what is her chances of survival!

This article includes spoilers don’t read if you haven’t read the manga.

In chapter 125 of Jujutsu Kaisen manga, there has been a lot of speculation going on about Nobara. when she and Itadori’s confronted Mahito, the fight did not end well for Nobara. Her condition was exceedingly serious and she was exhausted with Mahito’s strong attacks.

However, nothing much was confirmed absolutely in the chapter. There are sleek chances she will survive since Mahito’s attacks made the left part of her head explode with her left eye popping out while her recalling the precious memories of the past. Also with this, we should also remember that she was introduced as a very promising character especially at the end of Season 1 of Jujutsu Kaisen.

Im 100% sure that nobara is alive, she didnt do much in the story and killing off the 3rd protagonist that quick wouldn’t be right. Plus announcing shes dead many chapters later would be weird. What do you guys think? #JujutsuKaisen pic.twitter.com/a7sQijpbms

Nobara Kugisaki’s ability comes with her intelligence. Her powers may not be much at first glance however ever it’s the way she uses her set of tools which is the voodoo dolls in order to make them dance in her control. She has a good reserve for cursed energy and is an expert at manipulating it and using it through her straw doll technique.

What is the possibility that Nobara is alive?

She was injured in a very serious way. When Nitta arrives at the scene she realizes she doesn’t have any pulse or find any sign of her breathing. Therefore, the chances are really sleek. Also in an interview with Akutami sensei, he did not reveal much other than Nitta doing her best in recovering Nobara.

cw: blood
in honor of our queen Nobara
she is not dead.
I hope. #jujutsukaisen pic.twitter.com/5pN5hTz8k4

The real question is Will Nitta be able to treat Nobara back to her usual form?

In case Nobara dies it will be a huge loss for all the Nobara fans and further, it will devastate Itadori who was present at the confrontation with Mahito. As we know our protagonist Itadori, had previously regretted saving his friend, Junpei from Mahito in the school building. However, the situation with Nobara is different. They have been working together hand in hand for a long time. Not being able to save her from Mahito’s attack will make him blame himself till all the cells of his body.

PROBABLY dead? wait don't give me hope like that…sensei, nobara…i – 😭

Firstly Nanamin and then Nobara, the two most important characters in Itadori’s life. The latest it showed that Itadori is all geared up to avenge for both Nobara and Nanamin. He lashes a Black flash on Mahito. Now, it time for him to fight Todo.

And Nobara had no regrets in the end.
She said, "It wasn't so bad."

And she wasn't completely dead yet.
Her body stopped time right after she fell.

She must still be alive!! pic.twitter.com/lUStIwD5fs

We have seen Mahito’s power in various battles and have an idea of his fighting techniques. As for Todo, we have seen him fighting curses, and previously Gojo Satoro had also mentioned that with Todo’s capabilities he can even surpass him in the future. Also, Todo is known to have tackled all 100 curses single-handedly.

Mahito’s cursed technique is based on would manipulation and it has worked on Nanamin and other jujutsu sorcerors. His advantageous position is that most sorcerers are capable of physical attacks but never could they attack the souls. However, for Mahito it’s an easy job. Also due to this very reason, Nobara was a vulnerable opponent for Mahito since she knew to destroy souls with her dolls and Mahito was aware of her fighting techniques and her power of damaging the core of Mahito’s power.

That’s all about Nobara! The article will be updated with time. For more stay tuned to Spoilerguy.

Will Takemichi save Hinata from dying in Tokyo Revengers?