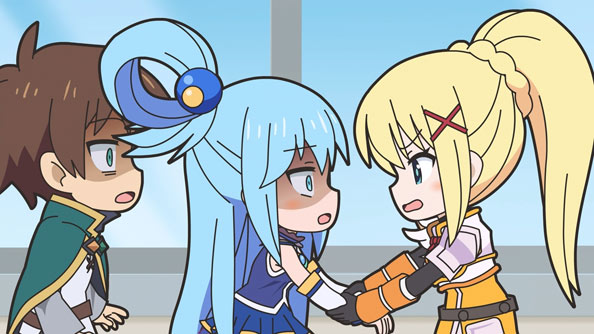 Hey Guys, in this blog we will be discussing Isekai Quartet Season 2 Episode 6. What? You don’t know about Isekai Quartet? Well, Isekai Quartet is a chibi style funny and Isekai anime. Moreover, it’s a crossover of a few famous anime.

The protagonists of KonoSuba, Overlord, Re: Zero − Starting Life in Another World, and The Saga of Tanya the Evil all press a button that moves them to a parallel world. In the parallel world, a new story featuring their high school life begins.

Isekai Quartet Season 2 Episode 6 is scheduled to be released on the 18th of February. moreover,  you can watch the episode online officially on Crunchyroll. We highly condemn the use of streaming anime or reading manga on an unofficial website.

Also, Read-No Game No Life Season 2: Is It Coming?

Isekai Quartet Season 2 Episode 5 air on 11th February. Moreover, this episode revolved around Valentine’s Day. Al the characters are planning to handover chocolates to their loved ones. The episode begins with girls talking to each other about whom they would give chocolates. Megumi thought of Kazuma and Emilia wanted to give one to Puck.

Soon Major made them aware of “duty chocolate” which allows them to give chocolates to everyone who works with them. But the fun part of the episode is watching Captain Weiss, trying his best to get one chocolate from one of the girls. He was unable to understand what he has to do in order to get chocolate from girls. Later, Kazuma gave him an idea that Captain must bow down in front of the girls and say “Give me, Choco” to get chocolates from them.

But, this idea backfires and he ends up getting attacked by the girls.

After the success of the first season in 2019. The second season of Isekai Quarte came out in 2020. Moreover, this 12 episodes long series will full of comedy just like the first season.

Minoru Ashina gets the credit for directing as well as for writing the Series. Besides, music is by Ruka Kawada. Studio Puyukai is the anime studio and as we all know it’s a Japanese animation studio that specializes in chibi-style anime.

Saki Hasemi To Launch A New Manga After To Love Ru!