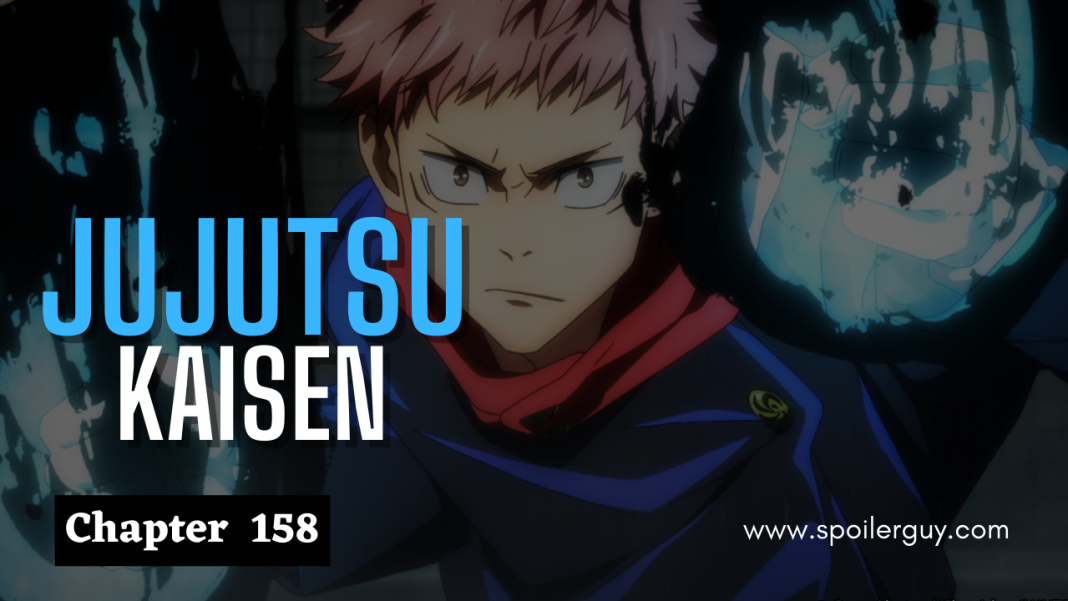 Jujutsu Kaisen has been on a roar from the release of its first season. In Jujutsu Kaisen Chapter 158 we will get to know the two against one battle. The result of the battle will be sorcerers coming to peace with Yuujii Itadori consuming parts of Sukuna. Even when Kirara wants to fight, Megumi somehow manages to pin her down with his Divine dogs. He speaks about their real intention which is to talk and not have a fight.

Pinning her down to the ground makes Kirara think if it was planned from before. Since she had previously tried to use her cursed energy against the attacks of Megumi but the contrary happened. To this Megumi replied that he just intended to take the risk and somehow it worked on Kirara. Kirara teases him saying he is not cute. Megumi lets her go but bends down and requests her to hear them out for once they really need their help at this point in time. But then Yuuji enters with a bang and Hikari and Yuuji get into a face-off.

Though you cannot really call it a fight since Yuuji takes the blows without fighting back in order to make Hikari come to their team. He takes blows from Hikari as a sign of getting punished. Hikari tries to hit him harder and Yuuji even starts to bleed. On the other hand, Kirara is worried as Hikari keeps on smashing Itadori. He yells at Hikari that Panda, Megumi, and Itadori require his assistance, and their means isn’t to cause any problems.

Hikari responds that he promised to assist them, but that defeating Yuuji is another story. Hikari questions Yuuji about why he chose him and put his confidence in him, and this is their first encounter. Yuuji responds that his friends informed him that Hikari is a formidable opponent, and that is why.

Holy shit this was the best chapter since this arc started. The determination Yuuji displays after his realization during Shibuya… I've got goosebumps all over my body 😭#JujutsuKaisen157 #JJK157 pic.twitter.com/Kl6mpw9ogs

Itadori realizes that Hikari’s punches are strong enough. He then reveals when one sorcerer asks for a favor from another it is mostly a matter of life and death. Therefore, Yuuji must demonstrate that by fighting him back as well as refusing to have the strike without fighting. To which he responds he is a ‘cog. The sorcerers’ cog in the mechanism for removing the curse. Hikari beats Yuuji and tells them about the bargain he wants at the end of the chapter.

There hasn’t been any delay reported. Therefore, Jujutsu Kaisen Chapter 158 will release on 12th September 2021. In case of any official change, the change will reflect in here. Chapter 158 of Jujutsu Kaisen is officially available on VIZ and Mangaplus.

Furthermore, the last three chapters of Jujutsu Kaisen are for free. However, to read the old chapters you need to avail their membership. There are many illegal sites where you can read the chapters for free. But it is always safe to pay and read and support the authors for their hard work.

-Itadori's passion moves Hakari!
-Itadori clashes with Hakari!! Will he manage to get his point across?

What to expect from Jujutsu Kaisen Chapter 158?

Jujutsu Kaisen has surprised us in multiple chapters. Hikari has beaten down Itadori and placed the kind of deal he wants. Chapter 158 of Jujutsu Kaisen will include the details of the deal for Hikari to fight in the same team as Itadori, Panda, Megumi, and others. Their team will get stronger but unless much is revealed about the deal it is another inconclusive end to decide if Itadori taking the blows from Hikari without fighting back was even worth it or not.

Lastly, Hakari and Kirara resolve to assist Itadori, Fushiguro, and Panda after a one-sided fight between Itadori and Hikari.

What is going to happen next in the Culling game?

Hakari and Kirara are eventually informed about the past events, including Gojo’s sealing, Principal Yaga’s death, and Fushiguro’s position as the Zenin clan’s leader.

A kogane (shikigami) appears to announce a new Culling Game rule. Kashimo Hajime, a new figure who appears to be hunting for Sukuna, is also introduced. This character’s initial appearance appears to have been 400 years ago. Kashimo Hajime has already accumulated about 200 points according to the game’s regulations. This new character’s contribution to the Culling Game is a new rule regulating the publication of information about all players, including a player’s name, points, location, and the number of times they used their points to add a new rule.

Hiruguma Hiromi and Kashimo Hajime, who both have over 100 points, are now the top two players. Megumi intends to change the game’s rules so that they don’t have to kill anyone. Itadori’s group is currently focusing on finding the top two players in order to earn points.

That was all about Jujutsu Kaisen Chapter 158 for more updates stay tuned to Spoilerguy.

Solo Leveling Chapter 152 Release Date, Expectations, and Where to Read?