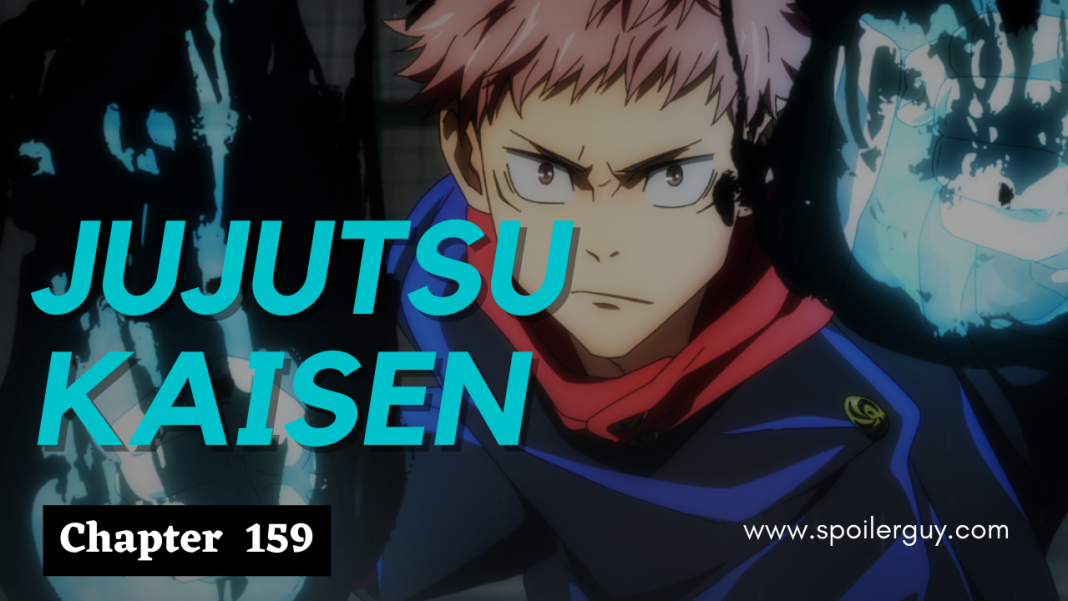 Jujutsu Kaisen has never been dull with the consequential fight scenes among the characters. We’ll speak about Jujutsu Kaisen Chapter 159 in this post, including its publication date and time, leaked raw scans and spoilers, and official sites where you can read the latest chapters legally and for free.

Jujutsu Kaisen 158
.
.
.
First of all: This chapter was funny af 😂 Hakari got real clown energy, love to see it

Gege Akutami’s Jujutsu Kaisen manga is serialized in Shueisha’s Weekly Shonen Jump magazine, with a new chapter released every Sunday. The Jujutsu Kaisen Chapter 156 will be released on September 19, 2021, at 12:00 a.m. JST, following the same schedule as the previous chapters.

There hasn’t been any delay reported as of now. In case of any sudden changes, it will be reflected in the article here.

Also Read: Most Popular Jujutsu Kaisen Quotes To Live By!

The last chapter was between Hikari and Itadori, though it was one-sided. But Itadori has again proved that his sheer determination is capable of moving others from their verdict. Coming to Culling game, The previous events, including Gojo’s sealing, Principal Yaga’s death, and Fushiguro’s status as the Zenin clan’s leader, are finally revealed to Hakari and Kirara.

A new Culling Game rule is announced via a kogane (shikigami). Kashimo Hajime is also presented, who looks to be on the lookout for Sukuna. The first appearance of this figure appears to have occurred 400 years ago. According to the game’s rules, Kashimo Hajime has already collected around 200 points.

This new character’s contribution to the Culling Game is a new rule that governs the public disclosure of information about all participants, including their name, points, location, and the number of times they used their points to add a new rule.

The top two players are Hiruguma Hiromi and Kashimo Hajime, who both have over 100 points. Megumi wants to modify the rules of the game so that they don’t have to murder anyone. Itadori’s team is presently concentrating on identifying the top two players in order to score points.

Also Read: Top Quotes of Sukuna from Jujutsu Kaisen you would like to revisit!

What to expect from Jujutsu Kaisen Chapter 159?

-At last, Itadori heads to the colony… Who's the player, who will challenge him!?

The raw scans have still not been released. It generally gets released three days before the release of the chapter. which is one day from now!. The Culling Game has begun, and Yuji Itadori, Panda, must carry out the strategy he devised with Megumi Fushiguro.

He chose to work with Fushiguro, the Zen’in Clan’s commander. Fushiguro was also accompanied by Hakari. While they were busy preparing, Kogane appeared out of nowhere and announced the new culling Game rule. Yuji also receives a player list from Kogane, which Megumi assists him in going over. According to the game’s regulations, the player must have access to the opponent’s specific information, such as name, a number of rules introduced, points, and current colony.

“Itadori finally enters a colony. who is the player that challenges him…?!” pic.twitter.com/Qy10YfCNB5

Yuji is convinced that he can win the Culling Game without murdering anyone. Kogane, on the other hand, divulged the details of the current two players, Kashimo and Higuruma Hiromi.

Where to read Jujutsu Kaisen Chapter 159?

The latest three chapters of Jujutsu Kaisen are officially available for free to read on VIZ and Mangaplus. But to read the old chapters you need to pay an amount of 3 dollars.

The raw scans for Jujutsu Kaisen 158 will be released by September 19 at the earliest, with fan translations following on September 14.

This is all about Jujutsu Kaisen chapter 159. Furthermore, the chapter will be updated with time. Till then Stay tuned to Spoilerguy.

Chainsaw Man Anime Release Date – Why Is There So Much...