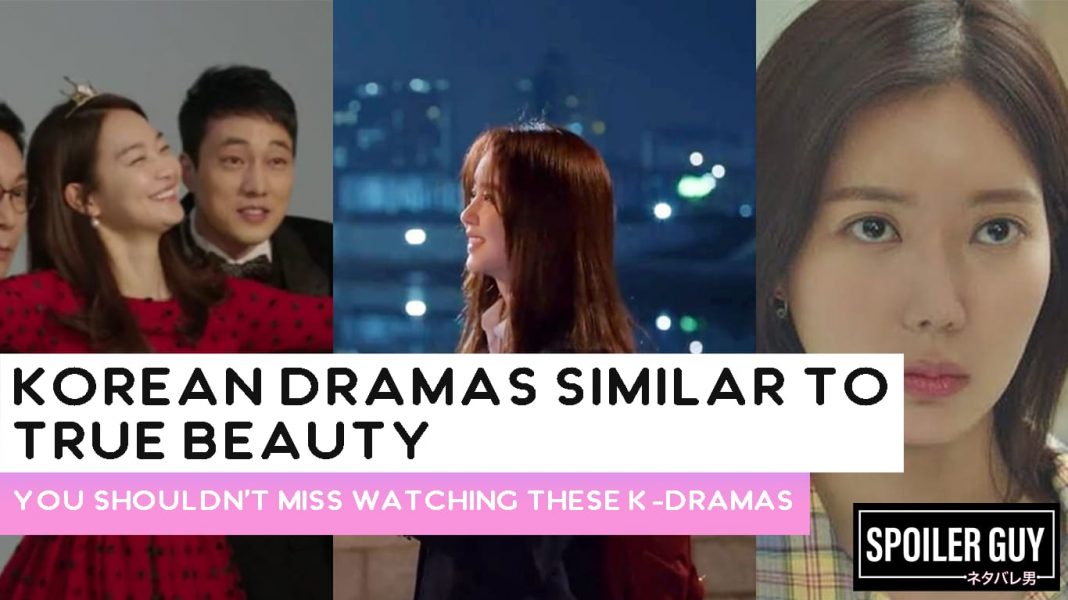 True Beauty is an ongoing hit Korean Rom-com based on a webtoon of the same name by Yaongyi. The plot revolves around an average high school girl whose life changes for the better after learning to put on makeup properly. From always being bullied to suddenly becoming the most loved one is only something Im Ju-Kyung could have dreamed of, but now it has become a reality. Throughout the story, we see our societies’ ugly side—the constant judgment based on appearances, ingrained materialism, and whatnot. The show tries to put up the fact that we are pretty the way we are and shouldn’t try to change ourselves to please others. Let us look at a few K-Drama that is similar to True Beauty.

Please note this list includes the Korean Dramas that are like True Beauty, as per the author. You can comment down your reviews at the bottom of this page. You can also reach out to us at our social – @spoilerguydotcom.

True Beauty is well known for its Impeccable casting, Realistic Storyline, Relatable Main lead, Humour, and love triangle. What makes the following Korean Drama series similar to True Beauty is the unique plot and flawless casting. Please note the list includes K-Drama like True Beauty; however, the list isn’t ranked. All the following shows are available on Netflix and Viki.

The Story follows Kang Mi-Rae, a timid college-goer who gets plastic surgery due to her constant harassment for being ugly. It is not smooth sailing as soon she starts being ridiculed for having gone through surgery to look pretty.

The drama explores the double standards in South Korea, misogyny, sexism, and superficial beauty standards. It portrayed the hazards in society exceptionally well.

There is a striking similarity between this drama and True Beauty, the lead heroines and their lack of confidence because of constant harassment. Ultimately both of them overcome every obstacle and stay true to themselves.

Meet the pretty, hard-working Hong Seol and her manipulative senior Yoo Jung. The drama focuses on their complicated relationship due to the stark contrast in their personalities and family backgrounds.

An unexpected development occurs when Hong happens to see Jung’s sinister side instead of his usual kind demeanor, and he notices this. He asks her on a date, and though shocked, she agrees.

The drama shows the importance of communication, trust in one other, being true to oneself, and accepting others’ shortcomings.

Here the character of Jung (ML), his different personalities are similar to Im and her different lifestyles in True Beauty.

The plot revolves around Deok-mi, a talented chief art gallery curator during the day and a fansite manager by night. Living two lives is tough as it is, but then she gets involved in a scandal.

The only option to protect herself is to fake date Ryan Gold, a talented artist who retired upon developing the Stendhal syndrome. Now begins their fake love life as art curator and director of Cheum Museum of art.

Forced to continue this act, both ultimately find themselves falling in love! Watch to see how their relationship pans out.

Here Deok-mi has to hide her lifestyle as a fangirl due to the judgment she would face for doing such a thing as an adult. Similar to I’m in True Beauty has to hide her no-makeup face.

Yung-ho/John Kim is a personal trainer who suffered due to an illness and therefore considered exercising regularly to live a healthy life. Even though he belongs to a rich family, he prefers to escape them while immersing himself in training and fitness.

He gets entangled with Joo in some embarrassing moments and is ultimately forced to become her trainer to hide his identity. Check this drama to find out how the relationship of this unlikely duo progresses.

Here again, similar to True Beauty, both the leads have a past they can never forget. One wishes to hide it, while the other wishes to regain it.

This critically acclaimed Kdrama follows Moon Kang-Tae, a caregiver living with his older autistic brother Sang-Tae and their encounter with Ko Moon-Young, a children’s book author, with an antisocial personality disorder.

On finding out that Kang-Tae’s past overlaps with hers, Moon-young becomes interested in him, and so begins the tale of two traumatized souls looking for comfort.

The show delves deep into psychological disorders and their repercussions, which is painful to watch and reinforces the need to pay attention to mental health. The cast learns to face their traumas and come out stronger.

Here at a glance, similar to True Beauty, it appears as if the leads are two perfect people. Except, they are not. They are deeply traumatized and appear to be fine.

It follows Jung Da-bin, an intern who used to have wealth, beauty, etc., none of it lasted with time. Struggling to survive while being embarrassed at her failures, she accidentally finds her first love Ji Sung-Joon!

He, too, seems to have changed a lot, but unlike her for the better. Gaining both good looks and wealth. Unable to face him, Da-bin sends her friend using her name. Unfortunately for her, Sung becomes her boss, and now her workplace is equal to hell.

Similar to True Beauty, to a good extent, a lot of the issues faced by the leading lady are due to her not so pretty self and judgment surrounding it. Even after trying her best, the constant judgment does drag her self esteem down.

Though with the help of a genuine friend, she decides to face her fears and conquer them. Unsurprisingly, this one’s based on a true story!

Appearances are deceptive; it is a prevalent saying, but it seems like most people don’t understand this. Otherwise, why would we judge people just on their outward appearance?

Dealing with this theme, this drama takes place in a company whose CEO Eun Hwan-Ki, appears to be a cold and strict boss. Since he barely shows himself, even the employees don’t know him.

But in reality, he’s not cold rather shy, introverted, and prone to anxiety thus;, he avoids meeting people. Most of the company meetings and presentations are done by his co-CEO in his place. Quite the opposite, the extroverted and bright Chae Ro-Woon gets employed there.

Initially, nothing feels amiss, but then it’s clear Ro-Woon is out to get Hwan and probably has a very grave ulterior motive. Surprisingly, once she starts to get to know him, she wishes to stay with him!

Both of them are perceived based on their outward appearance, like in True Beauty but are the exact opposites in their private lives, and they strive to keep it like that. It is obvious that this contrast is to be able to survive in this judgemental world.

All these Korean dramas share with True Beauty is the facade which almost everyone hides behind. We all ultimately wish to appear perfect to everyone at the cost of our individuality, and that needs to change. We need to understand that we are the best versions of ourselves.