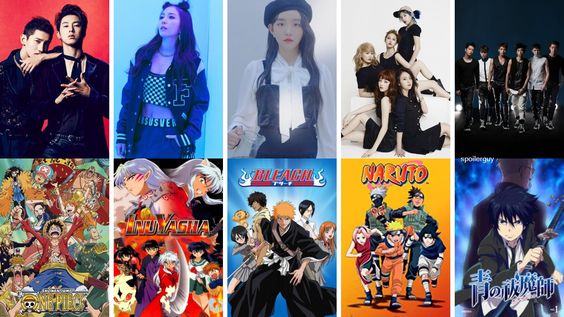 So, I’m assuming at this point you’ve heard of K-Pop? The trend is taking the world by storm.

But as an anime fan, did you know that you’ve likely been exposed to K-Pop years before it hit the mainstream?

Japan and Korea have had a K-Pop cultural history long before Psy’s 2012 hit “Gangnam Style” took the world by storm. South Korean pop culture and entertainment industry was first introduced to Japan through their Korean dramas, and it has since grown exponentially as more and more Korean artists began to enter the Japanese market. You could say that it was a massive success. In 2008, Japan accounted for 68 percent of all K-pop export revenues!

It’s only natural with Japan’s interest in the Korean Wave that K-Pop was incorporated into anime.

Also read: Why you should read Solo Leveling?

Without further ado, here are five K-Pop artists that you may recognize from legendary anime OST!

Introducing TVXQ, a South Korean pop duo currently consisting of U-Know Yunho and Max Changmin under SM Entertainment. TVXQ is an initialism for Tong Vfang Xien Qi, but they are known as Tohoshinki in Japan. Nicknamed “Asia’s Stars” and the “Kings of K-pop”, TVXQ has the most number-one singles and albums for a foreign artist in Japan, and they are also Japan’s best-selling foreign artist in CD singles of all time. Truly, TVXQ marked the rise K-Pop boy groups in Japan.

Cinnamon the Movie theme song “Together”

If you’re interested in listening to more TVXQ, check out their most viewed music video below!

BoA, also known as the “Queen of K-pop”, is one of South Korean’s most successful and influential Korean artists. She debuted at the mere age of 13 and became the first Korean pop star to achieve commercial success in Japan since World War II! Three of her albums have sold more than one million copies in Japan, and she is one of only three artists to have six consecutive number-one studio albums on the Oricon charts since her debut. Fun fact, she’s also a multilingual queen who speaks English, Japanese, and Mandarin, in addition to her native Korean!

Monkey Typhoon: opening song “Beside You”

If you’re interested in listening to more BoA, check out her most viewed music video below!

Go Youn-ha, also known as Younha, is seen as one of South Korea’s best singer-songwriters. An otaku herself, she began to teach herself Japanese after watching the popular Japanese drama, Gokusen. Just like BoA, Younha was also popular in Japan right after debuting at a young age. She was nicknamed the “Oricon Comet” for her success on charts, and she debuted in South Korea two years after Japan. As a teenager, Younha auditioned twenty times for South Korean record labels, but she was rejected because she wasn’t “pretty enough to become a star.” I consider this arguably a bigger mistake than the live-action remake of Death Note (but not by much).

If you’re interested in listening to more Younha, check out her hauntingly beautiful, new collaboration with none other than RM of BTS!

KARA was a South Korean pop girl group that debuted in 2007 with four members under DSP Media. At first, their debut was a commercial failure. The members also had to readjust to losing one member who returned to school and, the addition of two new members to replace her. However, after a year of putting in the work, KARA eventually became a breakout group with hits like “Pretty Girl”, “Honey”, “Mister”, “Step”, and many more! In 2016, the group officially disbanded, but their members created a large and lasting discography that paved the way for Korean girl groups in Japan.

If you’re interested in listening to more KARA, check out their song that became the most downloaded song by a K-Pop girl group in Japan in 2012!

Did you know that 2PM didn’t start as just 2PM? Instead, the group was formed through a survival show called “Hot Blood Men.” The 11 winning trainees, a term for pre-debut aspiring idols still ‘in training’, were put together in a group called “One Day”. This group was eventually split into 2 independent groups: 2PM and 2AM! In 2008, 2PM debuted as a six-member boy group under JYP Entertainment. 2PM debuted in Japan with the song “Take Off”, which was featured as the ending song in the anime Ao No Exorcist.

If you’re interested in more 2PM, check out their most viewed music video (and a total 2011 club banger) below!

Well, that’s what we have for now. Thanks for reading! Make sure to follow our Social media accounts for exclusive pop culture news, leaks, and spoilers.

Top BTS Quotes To Live By!!