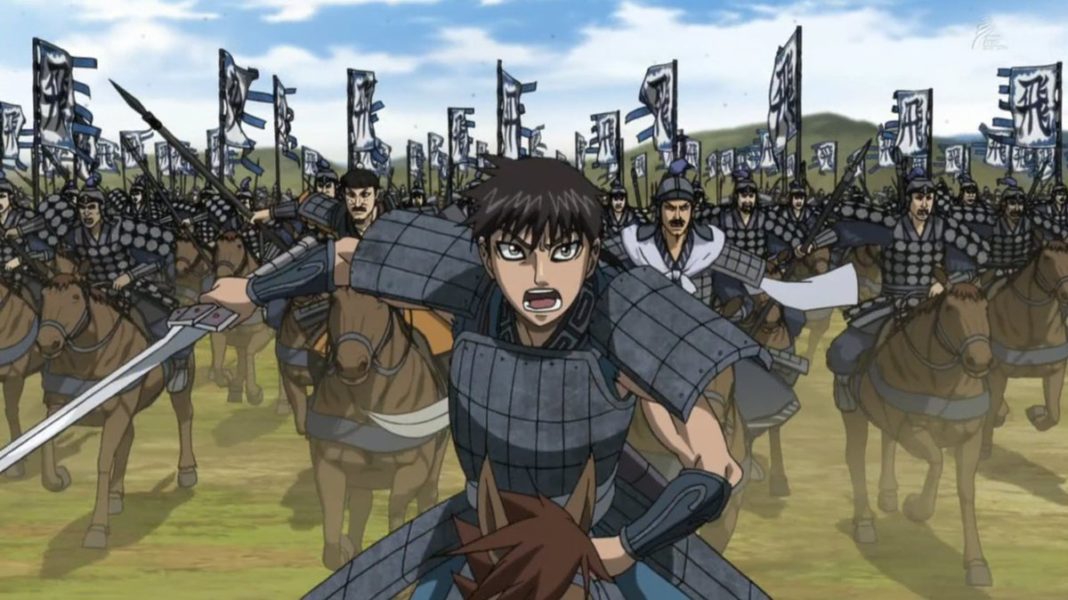 Howdy, Kingdom fans. The manga recently aired its 638th chapter, and readers all around the glove are full of beans for Kingdom Chapter 639.

With Riboku being far away from the field, and everyone inside Gyou being saved, the previous chapter ends. Kingdom 639 will continue the story from here.

Are there any delays in Kingdom Manga?

No, as of now, no delays have been announced, the chapter will air on the same date as scheduled.

Besides this, the anime is currently airing its 3rd season, you can read more regarding the same here.

Before starting with the discussions of Kingdom Manga Chapter 639, let have a quick review of the previous one:

If you have read chapter 638, then you already have an idea of satisfying it has been. In the beginning, we saw a flashback of Ousen asking Shou for a favor. At this point, he has realized the only way Qin would use to supply to their army is – The Yellow River. On the other hand, he has already expected that Riboku already knows it. Thus, the only way Gyou could deliver the supply is through a second path with the river. Ousen made three requests –

Riboku could not reach out to the army on time due to the distance between them, he was far away from the field. Moreover, it was too late, by the time Kaine and others realized the truth. Everyone inside Gyou was saved and could fight another day.

With the story reaching climax, aren’t we all excited for Kingdom manga chapter 639?

Moreover, there’s no delay in the manga. Chapter 639 of Kingdom manga will air on the same date as scheduled.

Updates: The chapters leaked scans and spoilers are already available on the internet. We have included them below in this article:

Everyone, including me and you, are excited about the upcoming chapter. Tou’s army reaction to Shin slaying Houken would be worth the wait. Moreover, as we said earlier, the spoilers for Kingdom 639 are out.

The release date for the chapter is confirmed to be on Thursday, 16 April 2020. You can read the chapter officially on Weekly Young Magazine.

Riboku has lost and led the country to its ruin he’s being imprisoned. When Kakukai comes to visit him he asks him to pass on a message to the other officers: it’s not all over, and that by reaching peace agreements with Yan and Wei, they could concentrate their forces to push Qin away from Retsubi and break their “chain of conquest”. But Kakurai will never deliver the message.

Qin will gather his forces in Retsubi to retake possession of the passage and keep the whole region. That’s why we saw Tou at the end. Kingdom 639 ends, continuation in Kingdom Chapter 640.

Kingdom manga is coming from Hara, Yasuhisa. The manga is being serialized in Young Jump since January 2006. In 2013, the manga won a Guinness World Record for manga written by most people. Kingdom covers up the genre – Action, Drama, Historical, Military, and Seinen. As for the plot, the plot revolves around Xin and Piao, the war orphans who wish to become the “Great General of the Heavens”. As of now, the manga has aired 638 chapters, Kingdom Chapter 639 will be out soon. Moreover, Here is a video of the popular Chibi Reviews on Kingdom –

While you are under quarantine, why not read our latest article on Anime recommendations.