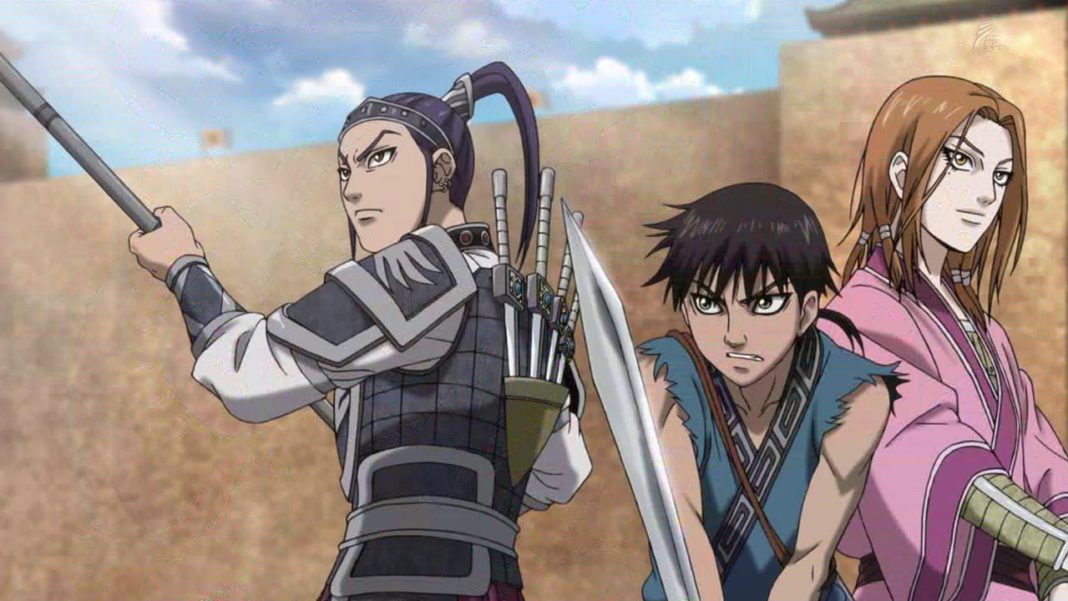 The Kingdom is a well-known franchise all around the globe. The manga recently aired its 631st chapter, and fans are all the more excited for Kingdom Chapter 632. Readers are happy with how the plot is progressing. With the confirmation of Kyoukai being alive, fans are full of beans for more action-packed chapters. Besides this, it seems the Qin army will go after Riboku sooner or later. The next chapter might unveil if there’s a plot twist left to this arc.

From the discussions and reviews of the previous chapter, it seems the Readers are happy with Kyoukai being alive and Shin coming back. Now, the story will focus on the main arc. Moreover, the creator is well known for all those unpredictable character development. Fans are wondering what Kingdom 632 has for them?

After the return of Shin, the plot focus can now shift towards to the main arc. Kingdom Chapter 632 will revolve around the cheerful moments of Hu Shin units after seeing Shin alive. Moreover, Kyoukai is left exhausted after trying to revive Shin.

The next chapter will revolve around the upcoming events, focused on Shin’s revival. Adding a few emotional scenes is indeed a great idea to get everyone fired up, once again. Moreover, readers have been wondering what will happen to Kyoukai? Well, one thing is sure – Kyoukai is worn out as she gave all her life force to heal Shin. Readers are now looking forward to Kingdom Chapter 632.

Where to read Kingdom 632, Release Date?

There have been various predictions and theories on the internet regarding Kingdom 632. Besides this, there are no leaks and spoilers out, as of now. We will make sure to update if there are any leaks.

Kingdom Chapter 632 will be out on 20 February 2020. You can read the chapter officially on Weekly Young Magazine.

As for the spoilers, they are basically the raw scans, that are being translated by popular translators all around the globe. The raw scans for Kingdom chapter 632 are now out, and luckily they were instantly translated by a Reddit user.

Shin wakes up and the HSU is freaking out while Shin’s confused. They start grabbing him and as expected Shin is in a whole lotta pain. While everyone is celebrating Shin notices Kyoukai is still out.

Kyoukai is lost and finds her sister. Shou tells her why she said you couldn’t use the technique and that it’s amazing to see Kyoukai find a man she likes enough to use that technique for. When Shou asks when Kyoukai started liking Shin she replies saying he’s just a comrade. Then Shou asks if she would use the same technique for that buck-tooth guy and she replies “ah…no…” lol.

Shou then says it’s fine if they just say Kyoukai cares about Shin and asks when that started to which Kyoukai replies “probably as soon as they met.” Shou is jealous and salty. Shou says she has 1 bad news and 2 good news. Bad news: due to using the technique Kyoukai’s life span has dropped. She asks if Kyoukai regrets it and immediately Kyoukai says no. Shou says then the last 2 good things are—

Kyoukai woke up. Shin doesn’t remember anything but says he saw her in a dream and says thank you. Mouten and co arrive saying they got nervous as they thought Shin died. A soldier yells at the HSU to hurry up and chase Riboku and the HSU immediately gets reformed. Kyoukai and Shin are out of commission and Mouten begin to explain the situation per Shin’s request.

Riboku has run away and Sou’ou/Akakin are giving chase. Shin thinks he’s to blame but Mouten believes Riboku had confidence in his escape plan due to how long he was watching the duel between Houken and Shin so it’s not Shin’s fault. They also saw other members of the Riboku army retreating.

Bananji has escaped because he also had a predetermined escape plan and they couldn’t give chase because they had to deal with the other Riboku center army soldiers. Kisui’s army came from the Zhao right army to swing by and make it easier for Riboku’s army to escape backward before escaping himself.

Batei says if he sees that woman again he’ll kill her. Mouten says it’s the Zhao army’s full retreat and believes Riboku will head towards Gyou. Shin says they have to go after them and Mouten says they’ll receive orders from Ousen soon. He then says the battle that lasted these past 15 days on the Shukai Plains is their victory.

Kingdom manga is coming from Hara, Yasuhisa. The manga is being serialized in Young Jump since January 2006. In 2013, the manga won a Guinness World Record for manga written by most people. Kingdom covers up the genre – Action, Drama, Historical, Military, and Seinen. As for the plot, the plot revolves around Xin and Piao, the war orphans who wish to become the “Great General of the Heavens”. As of now, the manga have aired 631 chapters, Kingdom Chapter 632 will be out soon. Moreover, Here is a video of the popular Chibi Reviews on Kingdom –

Dr Stone Chapter 145 Release Date, Spoilers And Where To Read?