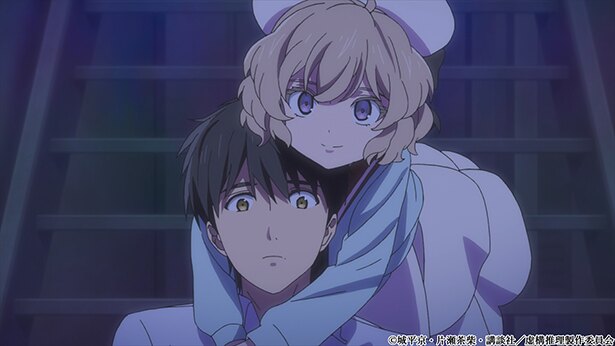 Hey Everyone! Kodansha has recently reported that In/Spectre will have a second season. The upcoming season has further unveiled a promotional video, visual, and much more.

Kodansha has uploaded a visual and a promotional video to announce its second season. Though they have not revealed the premiere date as of now. The promotional video previews the scenes and events from its previous season. Also, the promo is attached below.

The story centers around a girl, Kuro Sakuragawa. She is the goddess of wisdom of mysteries and works for solving the mysteries of everyday life. Later she fell in love with Kotoko Iwanaga at first sight. As the story follows we discover the adventure of two unusual people in love. They are confronted with a lot of mysteries which are again caused by “mysteries”. You can call it an anime involving romance, bizarre incidents as well as mysteries. If the plot has interested you, you can click here to visit their official website.

In/Spectre is also known as Invented Inference. It is originally a Japanese novel. Kodansha has published the novel. Kyo Shirodaira has written the novel. Hiro Kyohara has illustrated the novel. Chasiba Katase has illustrated the manga adaptation for its second volume. The manga is first serialized in Shonen magazine in April 2015. Later it was serialized in Shonen magazine R in December 2019. It has collected a total of eleven tankōbon volumes. Kodansha Comics has published the manga in North America.

This was all about the upcoming anime series. Be sure to stay tuned for more updates. Also, read Seirei Gensouki – Spirit Chronicles Novel Releases Teaser For Upcoming Anime Series! This blog is written by Spoiler Guy. Be sure to follow us on Facebook, Twitter, and Instagram for more interesting and the latest updates about anime.

Sneak Peek to The Promised Neverland Releases and More!