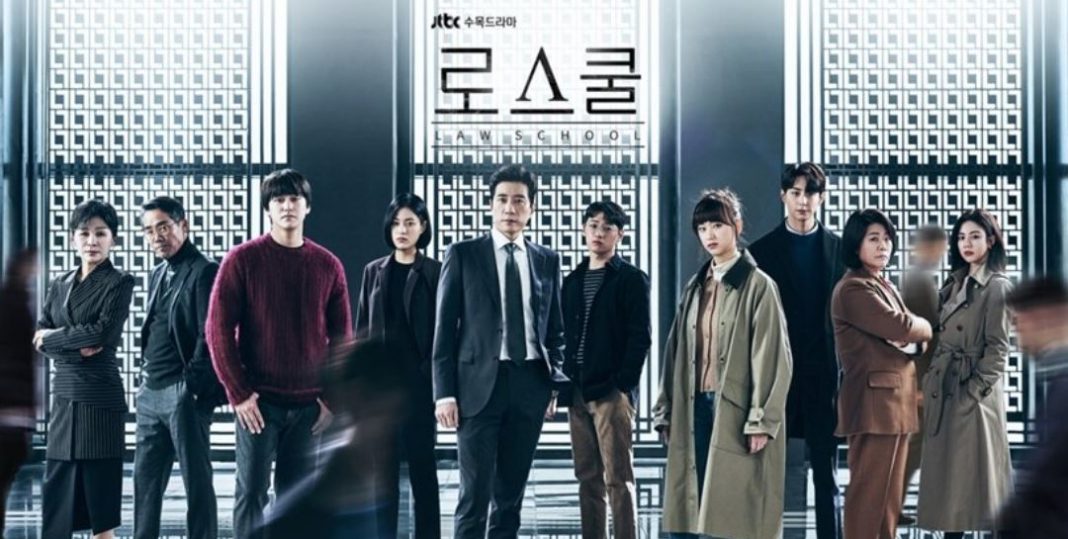 Enter into an acclaimed Law University, Moot Court in session, and all of a sudden, during a break, a professor dies! Who could be the culprit when everyone from students and teachers is suspects?

And that, my friends, is how this show starts. Raising suspicions from the get-go that everything is not as cordial as it seems. What is worse is that the dead dude has a reputation for being corrupt, and many hold grudges against him. Unsurprisingly, quite a few of these grudge holders were present at the scene.

If this wasn’t scary enough, the student’s trusted professor gets arrested as the man behind the murder, but only time will prove if it was actually his doing or not. As time passes, things get even more confusing, as the supposed culprit keeps changing with new facts!

Law School Season 1’s first few episodes were like Pandora’s box waiting to be opened. Each new episode unraveled a new mystery. The plot twists and satisfying ending were icing on the cake. Still, it is never enough for the fans who are already wishing for Law School Season 2. There are quite a few aspects that can be covered in Season 2. Before that, though, let us have a run-through of what was Law School Season 1 all about.

Law school has been insanely unpredictable throughout the first half of the story. Every time it feels that we know something, it turns out to be false! The first episode raised suspicions on everyone present in the court. But by the end, the suspect was Professor Yang! In similar ways, we were made to suspect characters only to realize it was not the case.

It is commendable how, in this complex plot, not once can we be sure of who the real culprit is because everybody seems to have secrets. Secrets that could lead to the downfall of many strong men. It is more or less confirmed that Prosecutor Jin and Assemblymen Ko are antagonists. Yet, we have no conclusive proof to nail the target on their heads. There are also more cases than just murder connected to them.

From amongst the students themselves,  their backgrounds and many unexpected connections make the plot even more complex. Han Joon Hwi’s uncle, Sol A’s sister & Sol B’s father, turned the story 180 degrees around.

Sol A isn’t the brightest kid in the class. She persistent, though, and that is what keeps her at the top of the game. Joon Hwi’s personal side aside, he’s a clever and kind kid who not only gets what he wants but also helps his friends whenever they need it.

Sol B seemed like a really suspicious person all along. It turns out she was just a kid brought up in an extremely toxic environment. Ye Seul’s ordeal was an ideal example of when one should know to leave an abusive relationship. From cheaters to corrupt officers to conscienceless reporters, everything was portrayed realistically. Politicians and their greed. The integrity of teachers like Professor Yang & head lady Oh Jung Hee.

A lot of law school fresh graduates was on their way to an interview for the same law firm. But only 3 well-known child and competitive graduates got accepted. What will these applicants do to achieve their goals, and who will stand out? pic.twitter.com/Dby440wktN

Supportive teachers/adults can make a lot of difference. Law School reinforced this by having teachers who were beside their students throughout. Always motivating them, but also letting them deal with their issues themselves. Not spoon-feeding them for the sake of their own future.

Law School season 1 started spectacularly though the hype subsided later on. Despite a few issues, it was done very well. I would actually love to attend Yangcrates class!

Kim Myung did absolute justice to Yang’s character. If my law college had Yang as a teacher, I would have become a better student. Every character was well portrayed. I can’t explain how many times I had the urge to slap Ko & Jin. If Law School season 2 does happen, I definitely want more focus on daily classes. Especially are a gang of gusty girls & boys who let nothing stop them.

Law can be both a weapon & a shield. That is what Law School proved.  Ko & Jin misused Law for their own gains. At the same time, Yang & his disciples scoured the loopholes for the welfare of all.

” The Law is imperfect Justice.”

“But when you teach law, the law must be perfect.”

“And when you study law, it must be synonymous with Justice.”

“Because unjust law is the cruellest violence.”

Law School Season 1 ended on a satisfactory note. With both Sol A & Joon becoming a lawyer and prosecutor respectively. Meanwhile, Yang continues his beloved teaching job.

During Season their chemistry was most loved, so it would make sense to delve deeper into them with Season 2. Season 2 could also bring new law students and focus on their journey to become just lawmakers or enforcers.

If Law School Season 2 is to release it will be in April 2022. Considering the fact that Law School Season 1 first episode was released on 14th April 2021. Then again, if Netflix reprises it, a maximum of 10-12 episodes should be expected because there isn’t much material to cover.

Also Read: Why Taxi Driver Is Worth Your Time?

Dr. Stone Season 3 Release Date, Spoilers and Everything you need...