Spoiler Guy
Home Theories What is Lemillion’s quirk? Will he get his quirk in My Hero... 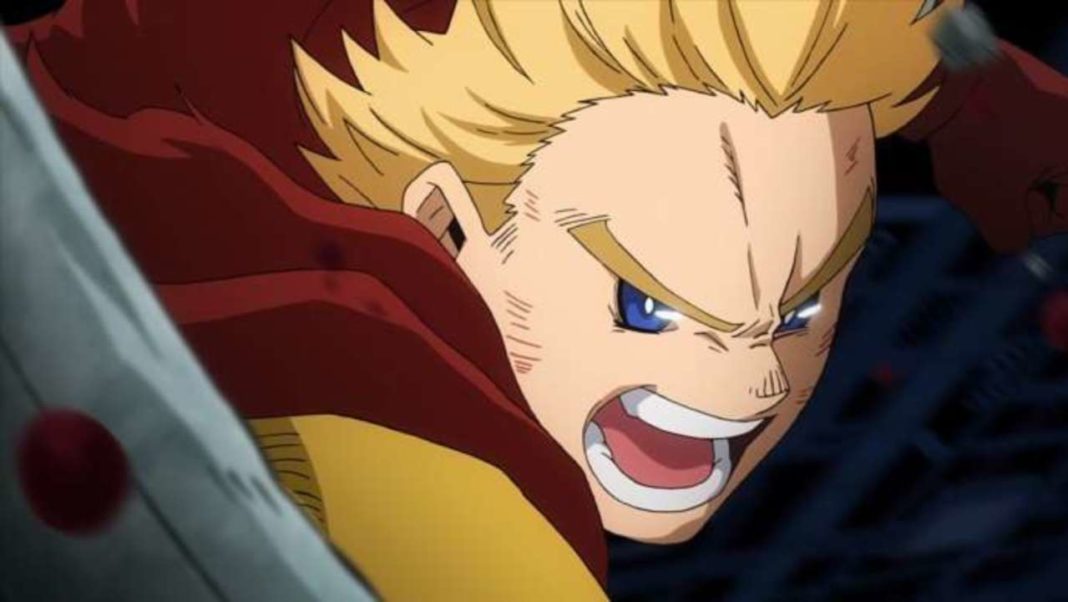 In a world filled with superheroes and villains, there is one who stands above all. He goes by the name ALL Might, he symbolizes peace and acts as an idol for all the other heroes. Our main protagonist is Deku who is quirkless and aspires to become like his idol. In a lucky turn of events, All Might recognizes potential in Deku and passes his quirk on to him. He struggles to handle the quirk without hurting himself. Later makes his way through the entrance exam of the U.A. HIGH SCHOOL. Further many incidents take place that shape and mold Deku’s skills. The entire anime revolves around the incidents which later add up to him becoming the No.1 hero.

Little Introduction To Our Sacrificial Hero

Lemillion, Lemillion, Lemillion one of the most loved characters in “My hero academia” .Mirio Togata who is recognized as Lemillion is a third-year student at U.A. high school. He was next in line to inherit ‘ALL FOR ONE’ before All might unexpectedly change his mind.

Lemillion’s quirk is ‘permeation’ meaning, the ability to phase through obstacles. His quirk is nearly uncontrollable and hard to perform. But his sheer determination to become the greatest hero motivates him to become better. Under the guidance of Sir Nighteye, Lemillion masters the quirk using prediction and speed. Hence utilizing the quirk’s phasing and repelling qualities. Lemillion is a humorous and kindhearted person who is similar to Deku in terms of motivation and focus on becoming the greatest hero. Deku and Mirio also share the same birthday (15TH JULY).

How Did Lemillion Lose His Quirk?

In season 4 episode 11, in order to save Eri, a team of heroes goes against overhaul and his henchmen. The team gets separated due to a villain who controls the building. But Lemillion uses his quirk and phases through the walls in order to reach Eri. Lemillion finds Eri with Overhaul and tries to retrieve her by going neck to neck with overhaul. As the fight continues Nemillion encounters overhaul’s henchmen who tend to be a nuisance to him.

Lemillion is later put in a tough spot where overhaul points a gun containing quirk removing serum at Eri. He forces himself forward and takes a bullet for Eri. By doing so he loses his quirk instantly. Deku and Sir Nighteye arrive on the scene and take on overhaul but Sir Nighteye ends up getting fatal injuries. Deku later uses Eri’s yet uncontrollable quirk to defeat overhaul.

Also, Read- How Strong is Asta’s Demon? The Secret Past of Asta’s Devil & Grimoire?

Now how will Lemillion get his quirk in MHA Anime series?

Will Lemillion Regains His Quirk In My Hero Academia Anime Series?

Eri is the granddaughter of Shie hassaikai. She possesses a quirk knows as Rewind. She can rewind a person’s body back to its previous form. Eri still hasn’t figured out a way to have complete control over her quirk. A small mishap may lead to catastrophe. As seen in the manga there is not much shown about Eri’s quirk control. But it is only natural to assume that this might occur. Lemillion saved her quirk by giving away his dream. The only way Eri could ever repay him is to use her quirk and change his body to the way it was before the incident. Using this theory it is highly likely that Lemillion will become a fine hero. Not only does this theory have facts to back it up, but it also has what we fans would want. THIS IS WHAT EXACTLY GOING TO HAPPEN WITH LEMILLION AND WITH HIS QUIRK MY HERO ACADEMIA ANIME SERIES.

What Does The Future Hold For Lemillion?

Lemillion later wakes up in the hospital only finds out that his teacher is in critical condition. He approaches Sir night eye who is laying critical in bed. Sir Nighteye reaches out to Mirio and says” Mirio..you’ll become a finer hero than anyone else, this is the only future that shouldn’t be changed “.

Overhaul has an anecdote stored away someplace which will be able to bring back Lemillion’s quirk. It is a known fact that there exists an anecdote as he shows it in the anime. In the mere future, there is a possibility for the heroes to find out its location and bring it to Lemillion. So far there is no hint about this in the manga, But we sure hope he does get his quirk back.

If you have watched the latest movie – Heroes Rising, the ending would have kept you at the edge of the seat. It’s a proven fact that Deku can transfer his power temporarily as he gives his power to Bakugou. With Lemillion’s combat skills, speed, agility, decision making, and predictive skills he would be unstoppable. What if at some point in the future Deku needs Lemillion’s help to take down Tomura Shigaraki. He might just share All for one with him and put an amazing right. This fight may prove Sir Nighteye’s future to be true. There are other ways Lemillion might get a new quirk. All for one might be the answer to this as he can access multiple quirks. Nomus is an example of how quirks can be forced into people. In the future, if there is a safer method to transfer quirks to a person, Lemillion might be tested. As said by All for one in season 4 episode 24 its is possible for him to return a stolen quirk. So we can expect this theory to take shape in the future.

A common question that arises often is if ALL MIGHT was right in choosing Deku over Lemillion. It is obvious that if Lemillion had one for all he would have saved Eri. Lemillion is far more skilled physically and mentally when compared to Deku currently. As a matter of fact, Lemillion’s own quirk will serve as an advantage to one for all. It is perfect for sneak attacks. Lemillion would be capable of using ‘United states of smash’ without the being in sight of the opponent. But who knows what Deku hold in the future. His drive to become the greatest hero of all time might his greatest strength.

Make sure to follow our Social media accounts for exclusive spoilers, theories and news.

Black Clover – The Malevolent Dark Triad vs Asta, Yuno and...