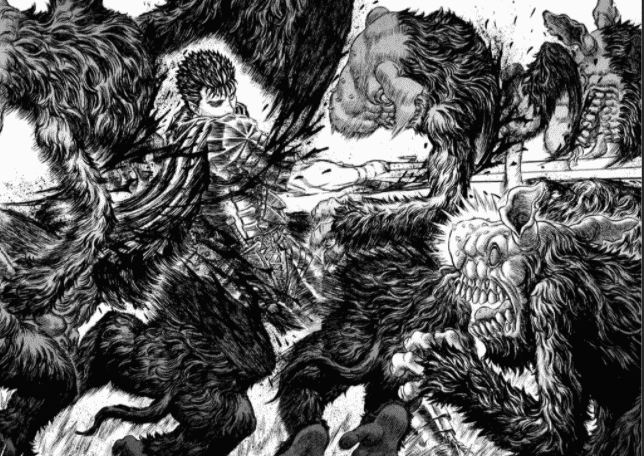 Horror and Dark fantasy are something that we all love to read and, when it comes to the Manga Universe, nothing can beat the intensity of Berserk. We are going to suggest you 4 Manga that you must read if you liked Berserk.

Berserk is a series that comprises epic battles from the world of swords and sorcery. The original run for the Manga took place in 1989 with a total of 40 Volumes. The story revolves around Guts, a boy who killed his adoptive father to free himself. With time, Guts gains a formidable reputation among people.

Griffith, the leader of “Band of the Hawk” mercenary, approaches Guts to join his troupe to which he denies. Eventually, Guts loses a battle against Griffith and is forced to join the band. As time passes, Guts polishes his skills and finally defeats Griffith, making himself free from the mercenary. He then moves to a solo training campaign where he gets to hear that Griffith’s band is on the verge of extinction.

Here is a list, which is a must-watch for everyone you had enjoyed watching Berserk!

Light Yagami, a high-schooler in Tokyo, obtains a mysterious notebook known as Death Note. The book could kill people if the user knows the appearance and name of the target. Light starts his killing streak from high-profile criminals in Japan, targeting international criminals later.

With the entry of Ryuk, the previous owner of the Death Note, Light gets to learn more amusing facts about the book. Ryuk, a Shinigami, explains how he dropped the Death Note from his boredom into the human world. The Interpol police hire a detective, L, to solve the murder mystery of devoured criminals. The manga is further available in Viz Media.

Considered one of the darkest Manga, Attack on Titan revolves around Titans and their attack on Eldians who live under the walls. Eren Yeager, the main character, wakes up one day and witnesses Titans’ attack on Wall Maria. Watching his mother getting slaughtered by a titan, Eren makes a resolve to exterminate the Titans.

Titans are giant creatures with the sole aim of murdering humans. Moving on with life, Eren realizes that he is gifted with the founding Titan, a Titan which could control other species of the same kind. Betrayed by his friends and family, Eren soon realizes that the world will end by human greed, if not by Titans.

Moved by the concept of Alchemy, the Elric brothers commit the taboo of human transmutation. Trying to bring back their dead mother to life, Edward and Alphonse Elric lose considerable parts of their body. Roy Mustang, a flame Alchemist, invites the Elric brother to join the state alchemy club.

Attacked by Scar, an Ishvalan, the brothers realize that there is a way to restore their bodies. To restore their lost body parts, Elric and Alphonse fight many battles against homunculus. On their journey to get their bodies back to normal. Winry Rockbell is a childhood friend who supported who lost her parents in the Ishvalan war.

It is a story of a young high-schooler, Shinichi Izumi, who is attacked by a worm-like parasite considered an alien. Shinichi Somehow prevents the parasite from entering the body from his nose, but the parasite enters through his right arm.

Wish they made a season 2 of this loves this anime Parasite the maxim pic.twitter.com/LfqyxTPUOm

Although they both have separate intellects, Shinichi and the parasite work together to keep other parasites out of reach from his brain. It is a horror-thriller and science fiction series that discusses humanity and the relation between humans and other creatures.

These were our top picks for Manga that you must read if you liked Berserk. Seinen genre is one of the most preferred by readers these days. Horror, Epic battles, Sorcery, Dark Fantasy, and Science fiction are some of the best options if you love to read Manga from time to time.

Top 10 Anime Similar to Tokyo Ghoul that You Need to...