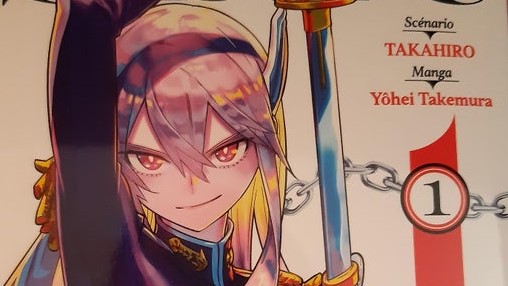 Mato Seihei no Slave has created a rage all over the manga industry. Takemura and Youhei are illustrating the manga with Takehiro in charge of the story. In the last chapter, Yukuma teases Yuki to join Yakuma San’s Harem as the two squads train to win in the upcoming battle.

Everyone is waiting for the battle of Kuusetsu. While both the team train prepares for the battle. Yakuma teases Yuki with her inappropriate touch and asks him to feel her. Well, it has become normal for him to go through it in almost every chapter. Captain Kyouka comes to the scene and glares at Yakuma. On a serious note, she asks everyone to practice more. Also as the practice continues Captain Kyouka talks about ambition to lead Anti- Demon Corps all by herself.

You can also read: Shuumatsu no Valkyrie: ‘Record of Ragnarok’ Chapter 45 Set to Release This March 27th.

Mato Seihei no Slave manga is on schedule and going to release on March 13, 2021.

"Mato Seihei no Slave" by Takahiro & Takemura Youhei has 300 000 copies in circulation (including digital) for volumes 1 to 5. pic.twitter.com/XSKIadCryz

It is Reddit to provide us with the leaks and other possible presumptions in the upcoming chapters. But for Mato Seihei no Slave is published digitally therefore not much not many raw scans are provided from the original Japanese scanned version. To know about the latest update you can look into the official platform of ShonenJump+.

In chapter 55 of Mato Seihei no Slave we can expect more look into the training sessions. Also, Yuuki will be harassed more often since he is of the opposite gender among the other females.

Where to Read Mato Seihei no Slave 55?

The latest chapters of the ecchi, action, and supernatural-based manga series- Mato Seihei no Slave Chapter 55, can be read on websites such as ShonenJump +. As for the English translation, you usually have to hold up for 2 days or so.

About Mato Seihei no Slave Manga

The story is based on an opening to a demon-filled dimension known as Mato. It has proved to be a threat for humans. But some females can protect humankind. They have a “peach” tree, and its fruit is capable of providing special powers. But only females can inherit the power. Yuki Wakura is a high school student. He is pressured to get a job and make a name for himself. But soon, he finds other doors open in front of him.

In Mato, Captain Kyouka from the Anti-Demon Corps rescues him from the demons. She grants his powers as her “slave”. As a result, he turns into a beast and fights them all. Later Kyouka takes him in for doing the household work. But is that all for Yuki to join Captain Kyouka or does he have other motives as well?

To know more about the Mato Seihei no Slave, stay tuned to Spoiler Guy.

Tonikawa Chapter 137 Release Date Spoilers and Where to Read?

Darwin’s Game Season 2 – Everything You Need to Know About...