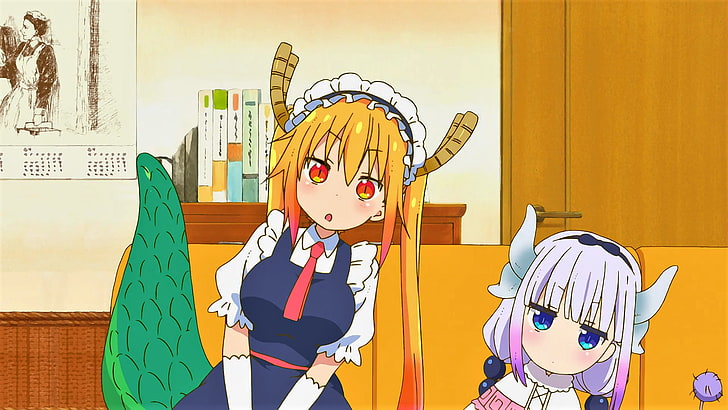 After the incident of the Tragic Kyoto Animation fire accident, the whole fandom went into downfall. It was a given by this time that there won’t be a Miss Kobayashi’s Dragon Maid Season 2, even though the First season was a super-hit and was welcomed by fans into the anime community.

After a long time, which is 4 years, the anime studios have released an official statement where they hinted at the arrival of season four of Miss Kobayashi’s Dragon Maid. Even after Takemoto not being between us. But Kyoto Animation Studios decides to move forward with the anime. Since they didn’t want to waste his hard work on anything.

Though, the Death of the director of Kyoto animation was tragic. In 2019, the studio caught fire, and it killed Yasuhiro Takemoto and a 27-year-old young man named Shiho Morisaki, who also worked for Dragon Maid Anime.

Miss Kobayashi Dragon Maid Second Season will have more dragons invading her Miss Kobayashi’s house. The series had a lot of wholesome scenes. The upcoming season will be fun to watch. Tatsuya Ishira is the replacement for Yasuhiro Takemoto. But it will still credit the former director as a tribute. A lot of people lost their lives in the Kyotoani fire; you can read it on Crunchyroll.

The staff and voice actors are still not confirmed. The news broke out more into fans when Sara Heidenheft, who voices the English dub for Tohru, retweeted a Dragon Maid Season 2 tweet from her own account. Everything is in production now. Even the opening song and ending song haven’t been created. The wait is finally over, and we are now more closely than ever to getting a second season.

Difference between Manga and Anime

So you're telling me it was bigger than that bottle?!
Impressive… pic.twitter.com/4eUDPnOE0n

Futubasha’s monthly action magazine released the Dragon Maid Manga in 2013, and the mangaka likes to call himself coolkyoushina. The Mangaka is very well known for his short Slice of Life stories. Coolkyoushinja is a quite successful mangaka. Besides dragon maid’s success, his two other manga – “I Can’t Understand what my Husband is saying” and “Komori san cant decline” have been turned into Anime. A Mangaka to have three of his works turned into anime is a huge deal in Japan. The mangakas are overworked, and some even kill themselves in the process.

The Dragon Maid Season 2 will release on Crunchyroll in July 2021, and a specific date hasn’t been decided yet. When the official statement is released, we will notify you about it on Spoiler Guy.

The fans have been waiting for the Dragon Maid Season 2 for the last four years, so the news that the season is already in production and half done is enough for them to rejoice. You can expect the first episode to release in the first week of summer in July. When many anime series are released mostly. You can binge on the first season on Crunchyroll.

The first season of Dragon Maid was released on July 7th. There has been news around that the Kyoto Anime Studio is trying to release the Dragon Maid Season 2 on the same day!

Let’s hope that the second season will be worth the wait, and as a tribute to mister Yasuhiro Takemotos Soul, it will be a hit amongst fans. When the studio releases more official statements, we will make sure to notify you about them.