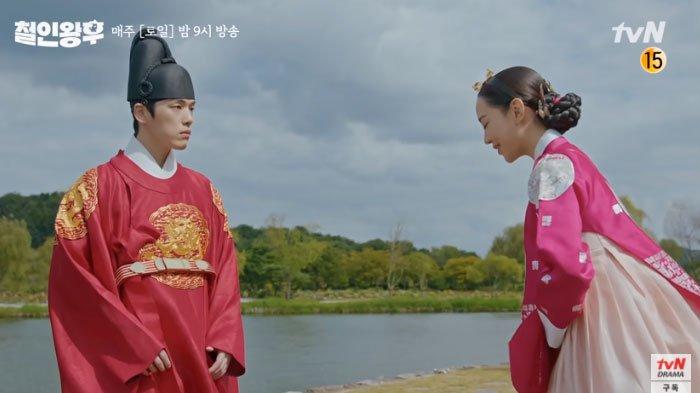 Mr. Queen Episode 12 is what we all have been looking forward to watching. Shin Hye Sun never ceases to amaze me when it comes to acting. She always brings out extraordinary characters and breaks all kinds of stereotypes. This drama is no doubt leaves us in awe. Furthermore, the cast suits the storyline perfectly. Moreover, the drama aesthetics are charming and peaceful; it has accomplished life in the Joseon Era wonderfully.

You might not know about this, but Episode 10 of Mr. Queen broke its own highest ratings to date with an aggregate of 12.8% nationwide and 14% in Metropolitan Seoul with a tip of 14.3% and 15.5% apiece.

I’m sure you experienced second lead syndrome while viewing ‘Crash Landing on You,’ Kim Jung Hyun brings us a Historical comedy-drama; what more, he is the male star!

Jang Bong Hwan serves as a chef at President’s blue house in modern-day Seoul. He is a free-spirited young man, so free-spirited that one day his spirit ends up waking as Queen Kim So Young’s body in the Joseon era; how will he endure in the Joseon era and an entire nation to rule on, also he now needs to take care of her husband, King Cheol Jong. This story follows a series of comedy and thrilling events.

Ever since the release of episode 11, viewers are eager to watch the 12th episode. Fans are going crazy over Twitter; here are some of the most popular tweets –

In episode 12 Cheoljong runs into the kitchen. I mean he can't be looking for Sobong she's doing the archery thing and he should know that, maybe she didn't come back when she was supposed to #MrQueen #MrQueenEp11 pic.twitter.com/lSXOmHjJ0k

The tweet above clearly states the events of the upcoming episode. For more updates and spoilers regarding the same, you can reach out to us at @spoilerguydotcom.

Many fans are wondering about the release date for Episode 12, as per our sources and the official website of Viki. Mr. Queen Episode 12 will release on 17 January 2021 at 21:00 Korean Standard Time.

Where to watch Episode 12 of Mr. Queen?

You can watch Mr. Queen Episode 12 on Viki and Dramacool.