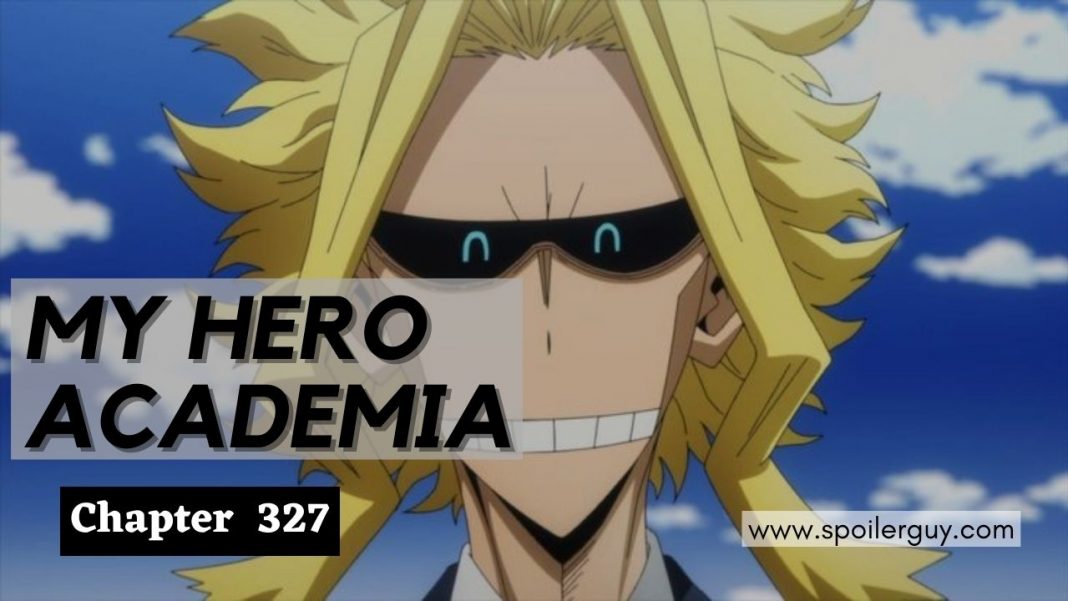 My Hero Academia Chapter 327 introduces the Hero Hating gang, with former Number One Hero All Might on his way someplace. Deku’s situation is revealed in My Hero Academia, as residents begin to embrace him at U.A High, although some still detest him.

All Might travels alone in the newest My Hero Academia Chapter, battling the civilians who despise the Heroes. All Might remembers on his way that he promised Deku’s mother that he would look after Deku and that he told Deku that he would join them for their operation with other Pro Heroes. “Who Are You Really?” is the title of the chapter.

All Might later comes in the city and discovers Deku’s outfit in the middle of the street. When he took up the phone, he spotted a message scrawled on his state that said, “I Am Not Here.” ”Couldn’t do anything for your followers when he was hurting,” All Might remarked. Shota Aizawa, a Pro Hero, accompanied him and understood that some individuals need a little encouragement in life.

All Might sits by his statue, unsure of what is going on. There are just two of them, and the residents have fled; there will be no heroes in the area. Everyone could look at the message and think that ”HE” is obstructing his progress by doing anything like that.

All Might was joined by a strange man who spoke about a Great Hero while aiming his blade at All Might’s face. It’s Hero Killer Stain, All Might says as he glances up. All Might was told by Stain to retract his statements. All Might responds that Stain has never met him during his peak. But, since their face-to-face encounter had been postponed in the past, he never anticipated they would meet like this after he retired.

Summary of My Hero Academia Chapter 326

All Might is asked to explain himself by Stain. Stained may have missed out on a lot while imprisoned, but he is back in the flesh, according to All Might. Stain is perplexed, unable to believe that this scrawny old man is All Might, and ponders what has occurred.

All Might responds that he understands Stain’s skepticism since he appears to be different. He takes a posture, and it is the stance of All Might. Because he is the Hero Killer Stain, All Might asks Stain whether he is considering killing him. Stain stares him in the eyes and says no, insisting that the man in front of him isn’t All Might.

The chapter also included a scene where All Might gives an emotional explanation to Stain and his reason behind protecting humanity all this while. Where he specifies that his goal was to make this world a better place.

Where to read My Hero Academia Chapter 327?

On VIZ, you can read Chapter 327 of My Hero Academia. The spoilers for the upcoming chapter are expected to release somewhere in mid-week. Overall the previous chapter was emotional for both the citizens as well as the Heroes trying their best to the best they can.

This is all about My Hero Academia Chapter 327. For more updates stay tuned to Spoilerguy.

Escanor “The One” finally takes on Zeldris “Ominous Nebula” in Seven...