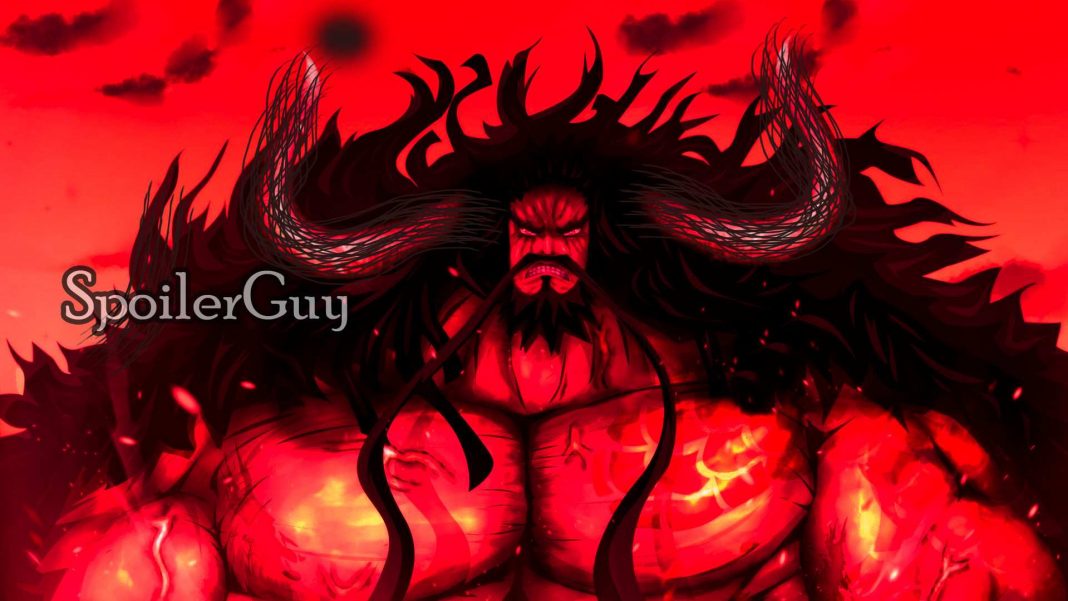 One Piece Chapter 1004 would be the first thing you will search on after going through the previous chapter of the series. The previous chapter of the series was full of the surprising element. And now as we are talking about the “surprising elements”, guess what? Luffy managed to knock out Kaido!!!. This was not just a surprise for the fandom one piece only, even Big Mom and Super Novas got surprised with the raw strength of Luffy. But every success comes with a price, Law revealed that Luffy would not be able to use his haki as he got passed out after attacking Kaido with Cannonball like technique. And not Luffy, other supernovas are now able to damage Kaido. And now guess what? Kaido now emerges in his new- Human-Beast form. “Yonkos are getting serious”. The previous chapter of One Piece was ended with a lot of hopes and expectations with the new upcoming chapter. Don’t worry, we got you covered-

So, Howdy guys, in this post, we are going to be talking about One Piece Chapter 1004. We’ve included every possible detail which includes the official release date, spoilers and where to read it legally. So, without further ado, let’s get going-

One Piece, Ch. 1,003: The Worst Generation continue their attacks against Kaido and Big Mom. But can these gods be toppled? Read it FREE from the official source! https://t.co/ILNueMA8T3 pic.twitter.com/8NKibavTqX

This time, Weekly Shonen Manga is on schedule. It means that One Piece Chapter 1004 is going to release on 14th February 2021.

The title of One Piece Chapter 1004 is – “Kibi Dango”. Besides this- the cover includes Chopper, a squirrel and a monkey and they are eating Rumble Ball candies together.

The chapter starts with Speed who is the Shinuchi of Beast Pirates. She’s going near to Onigashima’s castle giving Dango to the Gifters. Speed believes that dangos are a special recovery medicine from Queen.

Then as per spoilers- A little flashback starts. We can see Tama, she’s wanting to go help fight at Onigashima. She wants to see Wanokuni with Momonosuke as Shogun and she doesn’t want to be hungry again. So she used Speed’s personal ship to go Onigashima, taking Speed, Gazelleman and Daifugou together with her. On the ship, Tama created a huge amount of Kibi Dango. Cut back to present. We see Gazelleman and Daifugou running around Onigashima’s castle and distributing dango to Gifters too.

In the next panel, we see Franky Vs. Sasaki fighting. Franky Shougun shoots its “Weapons Left” at Sasaki but the attack doesn’t work. Sasaki crashes into Franky Shougun but Franky grabs his horns and throws him. Franky Shougun is about to shoot another weapon but the Armored Division jumps all over it and grabs its robotic arms and legs. These Gifters are very strong, together they manage to hold Franky Shougun still while Sasaki is charging again.

But suddenly Usopp, Nami, Tama, and Komachiyo run into the scene followed by an army of Gifters who are now on their side. Franky uses this chance to get away, so Sasaki crashes into the Armored Division instead. Ulti and Page One (that are following Usopp and Nami) shout that these Gifters have betrayed them. Sasaki is confused about why they betrayed them. Ulti jumps at Komachiyo, but Nami uses her “Thunder Lance=Tempo” to stop Ulti. The attack hits Ulti directly and she falls to the ground. Nami: “This isn’t enough to stop her. I need stronger thunder!!”

Cut to Black Maria and Sanji. Sanji defeats all of Black Maria’s male subordinates but he wouldn’t touch the female ones, so Black Maria manages to catch him in her spider web. Black Maria tells Sanji to shout for Robin, and her subordinate with eye-marked paper will send his voice all over the castle to lure Robin to Black Maria. She says Kaidou ordered her to take Nico Robin alive. Robin will be injured to the point that she can’t escape and will be kept alive until Kaido finishes using her. Sanji: “Don’t you dare underestimate Nico Robin!!”

Back to the Live Stage, Boa Huang announces that one of her spies (a rat with eye-marked paper) has found the Red Scabbards. They are lying unconscious in a room in the castle’s keep. King is still busy (we see him receiving the report but can’t see who he’s fighting) so he orders someone to go and kill the samurai immediately. Black Maria replies that she will go and do it herself since the room is connected directly to her floor. Bao Huang: “Hurry up, but beware! There are “10 people” in that room! I can’t see clearly because it’s too dark…but there’s someone else in there, trying to help the samurai!!”

In the room, we see a silhouette of a mysterious person tending to Kinemon’s wound. The person is normal size (half of Kinemon’s size). We see the side of his/her face and the nose/mouth shape make it seems like that person is a female (or maybe young male). The person is grinding his/her teeth and looks like there’re tears dropping from his/her eyes.

Where To Read One Piece Chapter 1004?

One Piece Chapter 1004 is available for free on Viz Media and Mangaplus. However, we highly condemn the use of streaming anime or reading manga on an unofficial website. A new chapter comes out every week. Furthermore, make sure to stay tuned to Spoilerguy as the manga goes on hiatus a few times now and then.

Eiichiro Oda is the mastermind behind the entire One Piece franchise. He started manga way back in 1997. Shueisha and Viz Media are currently publishing the manga. One Piece anime series is also equally popular and has broken several records. Chapter 1004 will release one Piece this week, which paves the way to its 1004th chapter of One Piece. This huge milestone achievement is truly well deserved by the One Piece franchise.