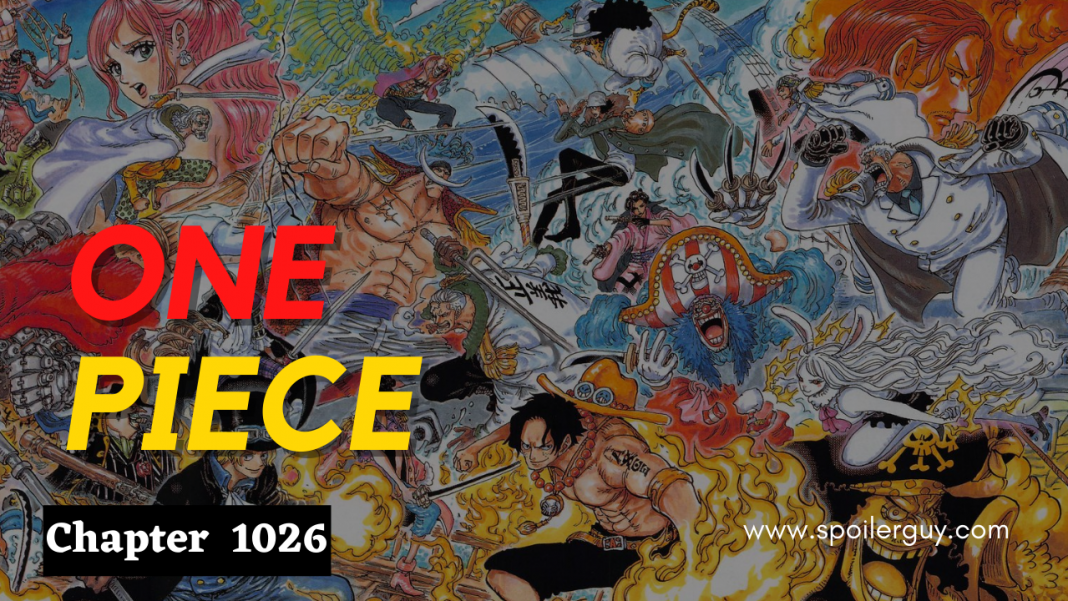 One Piece chapter 1026 is delayed by a week!. It is one of the longest-going manga that has still kept readers hooked due to its amazing characters and storyline. Here, we will be discussing One Piece Chapter 1026 release date, leaked raw scans, and official sources where you can read One Piece chapters for free!

Luffy climbs on top of Momo in the One Piece chapter 1025 summary, but he is unable to get off. Momo is still afraid of heights, which is why he is unable to accompany Luffy to the summit. As Shinobu and the Heart Pirates watch, Luffy and Momo dispute with each other.

Recap to One Piece Chapter 1026

On the rooftop, Kaido and Yamato are still battling. Yamato attacks her father with Kagamiyama. Kaido is still alive and well, and he’s taking care of his daughter admirably. She leaps into the air and attacks Kaido with Himorogiri, but he deflects it.

Yamato is mocked by Kaido, who claims she is from Wano and that she has no friends. She claims, however, that she had friends and supporters who believed in her. Kaido, on the other hand, claims that their friendliness was a ruse and that they were simply scared of her.

Been an epic few weeks with the amount of #ONEPIECE content we’ve been getting. Can’t wait to close it off with a head banging story and a long review 😏.

On the other hand, Momo eventually overcomes his anxiety and takes to the air, crashing onto the live floor. The pink dragon has drawn the attention of everyone in the room. Momo continues to smash through the floors, this time into the second.

He shuts his eyes and steps between Kid, Law, and Big Mom in their struggle. Big Mom confuses him for Kaido, and he continues to rise. He enters the third floor this time and frightens the Beast Pirates that are present.

Yamato plans another attack on her father from the rooftop. Momo eventually makes it to the roof and sees Kaido. Gear 4th Snake Man transforms Luffy. Yamato and Luffy team together to strike Kaido with a powerful punch.

#onepiece1025 #onepiece1026 #onepiece
Officially 🔥
– One piece manga is having a break next week!
Which means one piece chapter 1026 will be officially released on september,26th.

– Full spoilers+Translation of chapter 1025 will be out on friday
Stay tuned for more updates🎯 pic.twitter.com/BNFkpfK2nd

Luffy expresses gratitude to Yamato for keeping Kaido occupied. Luffy claims that he will not die because he will ascend to the position of Pirate King. Momo claims to be on his way to become the Shogun of Wano nation. Kaido grins and adds that the planet does not require two dragons.

Momonosuke was still frightened of heights, so flying too high was difficult for him; instead, he chose to fly with his eyes closed while Luffy guided him. He was able to catch up to Onigashima in a short amount of time, but he crashed on the live floor. As a result, he had to ascend to the rooftop with his eyes closed.

What was fascinating about this was the reactions we received from both the Samurai and Kaidou sides as he progressed through each floor. Knowing that there is only one known dragon, most assumed it was Kaidou, because the last time they heard from him was after he beat Luffy.

They knew it wasn’t Kaidou but someone else when they noticed the pink hue and Luffy riding on his back. Meanwhile, Yamato continues to go toe-to-toe with Kaidou, who has made up his decision to deal with her now that she still claims to be Oden. Momonosuke arrived just in time for Luffy to assault Yamato, who was still fighting.

One Piece will release on September 26th, 2021. In case of any delay or update in the manga, the change will reflect in here. One piece is on a week break, if you have noticed One Piece often takes a break after every three chapters.

Where to read One Piece Chapter 1026?

What to expect from One Piece Chapter 1026?

Most likely, the next manga issue will offer an update on King and Queen’s battle with Sanji and Zoro. While fans are familiar with the Straw Hats’ Monster Duo’s power and talents, they have yet to witness their prowess when pitted against the Beasts Pirates’ strongest members.

In “One Piece” 1026, fans may also get an update on the current state of the battle in Onigashima. Furthermore, the next episode may reveal what happens to Tama, Nami, and Usopp.

It might possibly provide an update on Kid and Law’s struggle with the Emperor of the Sea Big Mom, as well as what happens to the Akazaya Nine and the rest of the Big Mom Pirates in Wano. However, there’s still time for the chapter to release so this article will keep you updated with the latest speculations and if there is any kind of leaked scans.

That’s all about One Piece Chapter 1026. To know more stay tuned to Spoilerguy.