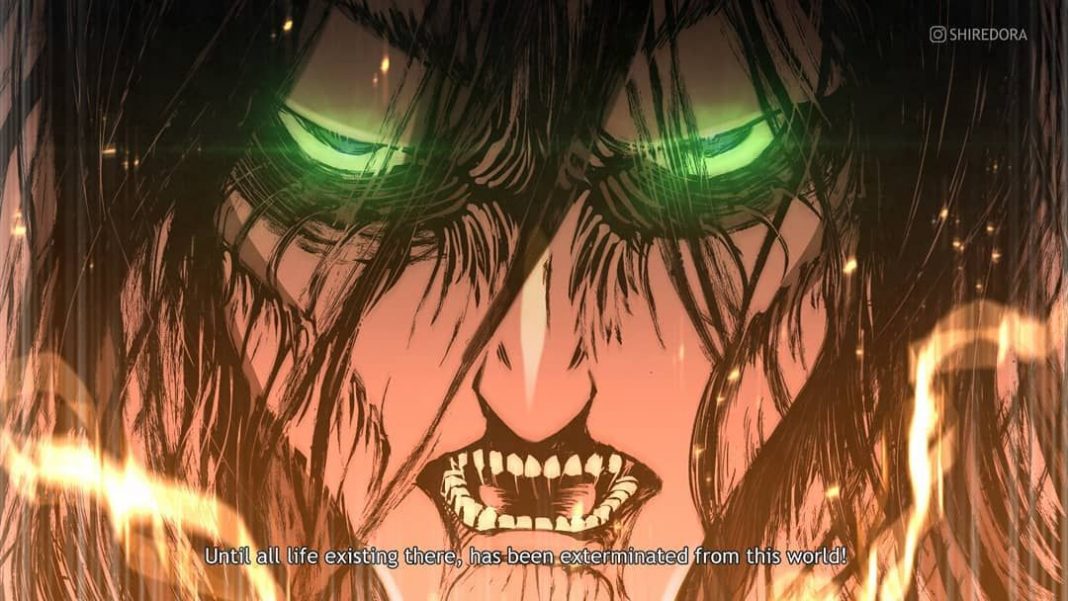 Ever since the announcement of Shingeki no Kyojin anime’s 4th season, fans have been going crazy on the internet. As per the releasing schedule of AoT manga, it drops a new chapter in the second week of every month. With the 133rd chapter of SnK manga, Readers are now eagerly looking forward to reading Attack on Titan chapter 134.

Fans have big expectations from Shingeki no Kyojin Chapter 134 as it might reveal Eren’s actual perspective of the world. Moreover, at this point, it’s impossible to stop Eren without killing him. Or I’d say, It’s even impossible to kill him.

With that in mind, let us have a look at the available information for Attack on Titan 134, including the release date, spoilers, and author’s predictions for the next chapter. Before we start, let us take a quick look at the review of the previous one.

After months of wait, we finally have an Eren Centric chapter. Eren finally left a Chilling setback to not just the survey corps but the entire world. Looking at the character development, the little boy turned into something else – Eren is now least interested in listening to what others have to say. He has decided on his goal and is now working towards achieving it. The Marleyan continent and others are doing their best to stop Eren, but little do they know – At this point, the only ones who might be able to prevent the mass killing by Eren are his companions from the Survey Corps.

Although Eren made this clear – he says, “If you want to stop me, then try to stop me from ever taking another breath.” So, they may have to slip back on their last resource, i.e., killing Eren, to save more lives from the rumbling. Attack on Titan Chapter 133 was titled “Sinners” and released on 9 October 2020.

The chapter ends with the Marleyan Continent barraging the army of Colossal Titans. Is this attack enough to stop the rumbling? We will surely get an answer to this in Attack on Titan Chapter 134.

This chapter will probably be the ending of Volume 33 – so do not lower your expectations. Something big might occur in the next chapter, and with the introduction of Falco getting a memory of a “never-seen-before” titan. There are high chances of Falco turning into a titan that actually flies. Chapter 134 of Attack on Titan might reveal something unexpected yet again. Well, this is exactly what Hajime Isayama is well-known for. I hope the previous delays of the manga won’t affect the actual plotline of the story.

Back in the day, in one of the older interviews – The creator himself said, the ending for Shingeki no Kyojin manga won’t be as happy for some fans. But let’s hope for the best!

Update: As of 30 October 2020, Attack on Titan Chapter 134 production has been finished, as confirmed by one of the staff members of the manga. And, it seems the chapter will be releasing a little early for the fans this month. Stay tuned to us on our Twitter account for such updates on Shingeki no Kyojin manga –

As per our sources, there are no delays in the manga’s releasing schedule, and hence, Attack on Titan Chapter 134 will release on 9 November 2020.

Is Shingeki no Kyojin 134 on a delay?

The manga did face some delays back then due to the ongoing coronavirus pandemic, but luckily, there won’t be any delays this time. As confirmed by the official account for Attack on Titan Wiki, the newest chapter of Attack on Titan manga will air as per its original releasing schedule with no delays.

Where to read Shingeki no Kyojin Chapter 134?

All the chapters of Attack on Titan manga are available on Kodansha, and hence, you can read Attack on Titan Chapter 134 officially on Kodansha Comics. Readers can also enjoy the original copies of the manga to support the creators. We highly condemn the usage of an illegal website to stream anime or read the manga.

While you wait for AoT Chapter 134 to drop, make sure to read our recent on Boruto and Dragon Ball Super.

There have been many discussions, theories, and predictions regarding Attack on Titan 134. Moreover, the spoilers and leaks are basically the raw scans translated by the popular translators on the internet. But you may not worry; we will make sure to add the leaks and spoilers to the article as soon as they’re out.

You can put your opinions regarding Shingeki no Kyojin Manga chapter 134 – in the comment section below. Furthermore, the spoilers of AoT Chapter 134 are expected to be released on or around 2 October 2020.

About Attack on Titan:

Attack on Titan aka Shingeki no Kyojin is a well known Japanese manga that began airing in 2009. The series is written and illustrated by Hajime Isayama. The manga has set various records among the most popular ones. And as of December 2019, the manga has 100 million copies in circulation, making it one of the top-selling manga series. Later on, the manga got an anime adaptation with the same name. As of now, the manga has aired a total of 133 chapters. Attack on Titan chapter 134 will be out soon. Here is the official trailer for the 4th season of the series:

That sums it up. Stay tuned to our other articles on the website and while you’re at it. Make sure to follow us on Twitter – @Guy_Spoiler.