Shinobu is a popular yet mysterious character from the Demon Slayer franchise, and with the ending of season 1 of Demon Slayer, fans are wondering, will Shinobu die in Kimetsu no Yaiba? In this post, we have included everything you need to know about Shinobu, including her past, her parents, and how she became an Hashira.

Does Shinobu Die in The Infinity Castle Arc?

Shinobu Kocho is one of the most loved Hashira of the Demon Slayer corps. She is an Insect Hashira who specializes in poison. Her weak and fragile body limits her ability from beheading a demon’s head, but she uses her poisoned blade to infect demons and kill them. Regardless of her lack of power, she is a skilled swordswoman who can go on par with the other Hashiras like Giyuu.

Shinobu becomes a fan favorite during the Rehabilitation Arc where she suggests taking care of Tanjiro and his friends. But during the Infinity Castle Arc, things take a huge turn for the worse with Shinobu meeting her most awaited Foe, the demon who killed her older sister.

Sadly Shinobu dies during an encounter with an upper rank-2 demon of the twelve Kizuki. Unfortunately, the demon who killed her older sister was able to kill her as well. It is a gruesome sight to see Shinobu sacrifice herself in order to kill a demon.

Who is the Demon responsible for Shinobu’s death?

Domu is the demon that killed Shinobu in the Infinity Castle Arc. Domu is an upper rank-2 demon of the Twelve Kizuki. We must take into consideration the power of this demon as he is an upper rank-2 demon. Kyojuro Rengoku being a fire Hashira and having the advantage of speed and power had died going against an upper rank-3 demon. So Domu was far more superior in terms of power, but Shinobu still managed to weaken Domu.

How does Shinobu Die?

In the Infinity Castle Arc, Shinobu encounters Domu who was the cause for her missing subordinates. She walks in on him devouring her subordinates, this enrages her and makes her crazed. Shinobu later realizes that he possessed a pair of Haori which belonged to her older sister. Domu finally remembers her and expresses his sadness of not being able to eat her sister as the sun had come up.

This injures him but takes a great toll on her as Domu strikes her badly. Shinobu is injured really bad and still tries to pull off a finishing move,  Insect Breathing, Dance of the Centipede: Hundred-Legged Zigzag. Her final attack goes in vain as he instantly heals.

The Tragic Death of Shinobu Kocho

Domu catches on to Shinobu in a free fall and confronts her saying her efforts were all just play with no seriousness. She had no chance from the beginning. Domu absorbs Shinobu’s body into himself. Kanao and Inosuke enter the room only to see the gruesome sight.

But an unexpected turn of events takes place. Shinobu had taken the poison of the Wisteria flower every day making her body poisonous but on an extreme level. She had thirty-seven kilos of wisteria flower poison in her body which was more than enough to kill a demon. Although the poison wasn’t enough to kill Domu since he was an upper rank-2 demon, she foresees this outcome. This act of hers let Kanao and Inosuke land their final blow.

Shinobu meets her older sister Kanae in the spirit world and passes on with no regrets. The death of Shinobu Kocho, the butterfly Hashira will go down as one of the saddest moments in the entire franchise.

Past of Shinobu Kocho

The Past of Shinobu Kocho is rather sad which explains her weird nature. Shinobu Kocho is from the Kocho family. She is the younger sister of Kanae Kocho. Shinobu and her elder sister were the only ones who survived when a demon attacked their house. Gyomei Himejima, the Stone Hahira was the Hashira who saved them both. This made the sisters want to save lives and slay demons.

After a great struggle, they both become members of the demon slayer corps. During their adventures, they come across a girl being sold as a slave. Kanae immediately intrudes and takes that girl away from that place back to the butterfly estate. 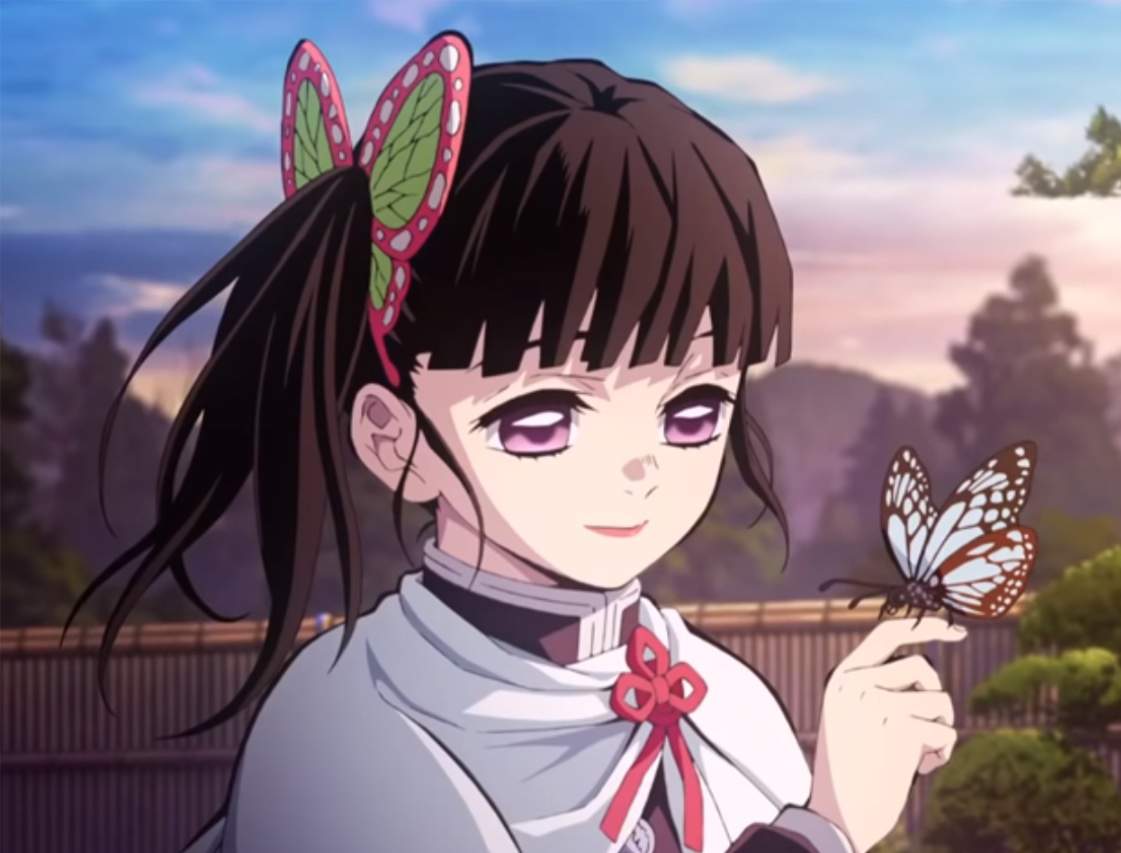 That little girl grows up to be Kanao Tsuyuri. The past of Shinobu plays an important role in her character change. Shinobu always had an aggressive attitude, unlike her sister who was sweet and kindhearted. After the death of Kanae,  Shinobu decides to act like her elder sister and becomes a calm and kind-hearted person. She takes over the Butterfly estate and treats all the girls like her own sisters.

As time passes by she becomes the Insect Hashira of the Demon Slayer Corps. While you’re at it, make sure to check out the new Shinobu figurine, launched by Demon slayer Official twitter account –

Have You Read: Top 20 Sports Anime

The best anime of 2019 by Crunchyroll was awarded to Demon Slayer: Kimetsu no yaiba. This Japanese manga written by  Koyoharu Gotōge is an absolute masterpiece. The morals and mentality of the main protagonist is an admirable aspect of this anime, expressing the quality of character development.

The fights are portrayed in a fluent yet intense and colorful manner, making it a beautiful spectacle to watch. The narrative is perfectly paced and addictive due to little hints of suspense placed throughout the anime. The franchise is soon releasing a movie that covers up the Mugen Train arc, here is the trailer –

The entire episodes are available for online streaming on Netflix, Funimation, and Crunchyroll, Do make sure to check it out.

Why Should We Watch Dr Stone?