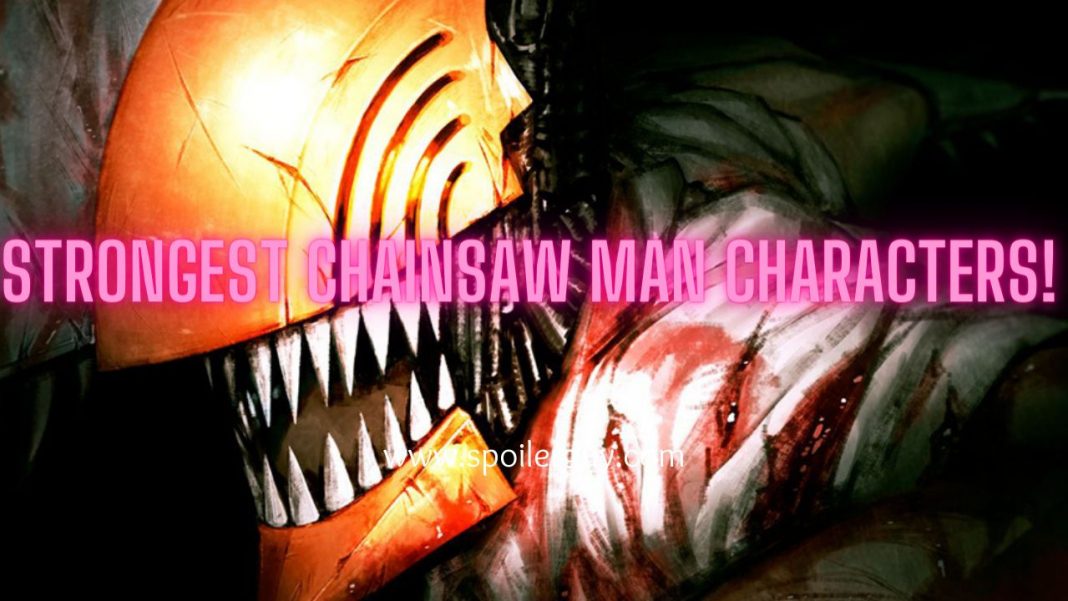 When we talk about Chainsaw Man, there are many characters that flash in front of our eyes. Some of them had great strength and endurance, making them quite fearsome. With MAPPA taking over the authority of anime adaptation of this manga, we are sure to witness some ferocious fights in the coming days. Till then, you can also read the manga on Viz.

Reze seems to have been a Soviet spy who had been in the army since he was a youngster. The Bomb Devil’s corpse is joined with her at some point, resulting in the Bomb Devil Fusion. Considering her frail appearance, she possesses tremendous brute ability and a vast range of destructive skills.

She had come to kidnap Denji and deliver his heart to the Gun Devil. By pressing a lever from her choker band, she may rupture her skin into massive explosions. Her devastation level skyrockets as she transforms into demonic forms. She defeated a slew of demons and devils, as well as those who attempted to save Denji from her.

You can also read: Best Tattooed Anime Characters and the story behind them!

She is a German Demon Slayer who has arrived in Japan to steal Denji’s heart. She had a pact with the Doll Devil that allowed her to turn everybody into a Doll, obey her, or do whatever she said. Because the puppets are relatively feeble separately, her major benefit is the large number.

She became Tolka’s Master and, later in the novel, and she also gets into a bond with Darkness Devil. When darkness comes, she changes into a Doll Centipede, growing bigger and stronger. She quickly dominates everybody and communicates her agony to other dolls, rendering her virtually invincible.

He seems to be a complete devil, similar to Strength, who has been confined and has become a Devil Hunter. He possesses a strange power, namely, the capacity to rob anyone’s life span simply by touching them. This makes him all worthy to be included in our list of strongest Chainsaw Man Characters. He once shaved 2 months out of Aki’s life simply by holding his hand for a moment. Alongside Kishibe, he is considered the strongest Devil Hunter in Japan.

You can also read: Chainsaw Man Anime Release Date – Why Is There So Much Hype?

He is a quick Devil Combatant with a strong background. He may materialize weapons with the life span he has acquired, but he could still not return those. Till now, we didn’t get to witness his actual abilities until Makima got ahold of him and summoned a 1000-year slashing blade from his Halo.

Quanxi is portrayed as a renowned Devil Hunter who is said to be the most powerful in history. She quit the squadron for whatever reasons and went to live with Devils. She is accompanied by four companions, all of whom are pretty close. One of them might be Cosmos Devil, who handles all of Quanxi’s errands. She possesses physical ability equivalent to Kishibe. However, she is a member of the Chinese team.

Eventually, she becomes an Arrow Devil Blend after signing contracts with the Arrow Devil. She can fire a large number of darts at high speeds while using her bows to wipe out large groups of people at close range as a Buckshot.

Hell seems to be a dreaded domain, and the Hell Devil, of all, wields great authority there. Well, his name itself is enough to include him in our list of strongest Chainsaw Man characters. The hell devil appears as a stallion with a deformed visage, fiery body, and vicious claws. He has a calling contract with Santa Claus, and when called, he can drag anybody into hell.

Moreover, he can murder anyone in the emptiness of utter hopelessness and nothingness, and he has complete control over hell. Apart from this, he can transform into a massive hand and bring somebody to the gates of despair; he also possesses incredible stamina.

Punishment Devil doesn’t appear on its own; it must be invited with ferocious contempt and a substantial offering. In the entire existence of Punishment Devil, there were only two contracts, making it extremely difficult to gain entry. Despite this, Makima conjures The Punishment Devil by offering a large number of Illicit Souls and asks for his assistance in subduing the Gun Devil.

According to legend, the Punishment Devil seems to be the only Devil capable of defeating The Gun Devil, the plot’s adversary during the first arc. It contains multiple demons attacking the target directly from the sky side through a gateway.

The firearms and ammo mafia thrived like nothing else 13 years ago. The manufacturing and trafficking of tonnes and tonnes of guns by the media all across the world were discovered by mass treachery and searches. His overwhelming power and physical strength make him a part of the strongest Chainsaw Man characters. As a result, the Gun Devil became the most advanced and destructive devil on the planet.

The Gun Devil arrived in India one day and massacred 57,912 individuals in just 26 seconds before teleporting all through the world and killing 1.2 million population in less than 5 minutes. As a result, it became the most despised and despised Devil in history. The majority of Devil Hunters from around the globe joined the team to get vengeance on the Gun Devil for murdering their relatives.

Darkness is described as a primal instinct, and it is among the most powerful demons ever stated, as well as the most overwhelming Devil ever portrayed in the comic. When the Hell Devil forcefully brought Denji & his companions to hell, the Darkness Devil made just one entrance. The Darkness Devil is enormous and gigantic, with the brute fitness to raise a large population of people and Devils with ease.

It has a Darkness sword that causes a person or devil to spit up a large amount of blood when it comes into contact with them. Its one-of-a-kind power can instantly slice off the limbs of a large number of individuals, making them unusable.

Now we have reached the top of the list of strongest Chainsaw Man characters. Denji became a mixed Chainsaw man Devil after fusing his flesh with that of his companion demon “Pochita.” He can develop chainsaws out of his extremities and heads, allowing him to cut almost everything within his range. He had very little power and endurance at first, but when he became friends with Power and Aki, he learned the Regular Human Attitudes.

He acquired a lot of intelligence and learned to fight well after being coached by Makima and Kishibe. Later, it was discovered that everyone sought Denji’s Heart, including Devils and Mankind. When a devil reincarnates through Hell, it is said. The first thing they perceive is the identical one made by Denji’s Chainsaw Engine.