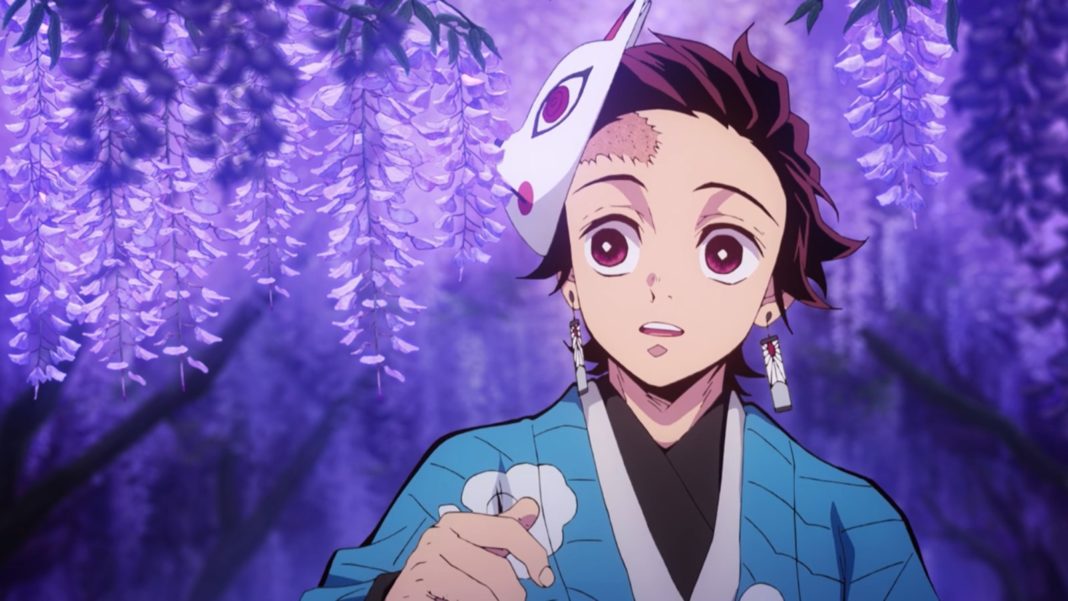 In the anime, Tanjiro’s scars take 3 notably different forms. And if you read the Manga during the fight with Daki it takes the 4th form. Now, what are these forms? If we see the shape and the spread of the scars it can be speculated that it signifies the growth of Tanjiro. As the scar evolves more and more some kind of special power should unlock.

Tanjiro’s father also has similar scars like Tanjiro. It means that those scars can also be seen as a birthmark of the Breath of Sun users. Shinjiro Rengoku also says that the mark is common for all the users of Breath of The Sun.

In Level 1, it looks like a red patch around his forehead. It looks like an injury, Tanjiro believes he got it from protecting his little brother from a Hot Tea Kettle.

The Scars shift it’s appearance and looks more defined and sharp. This happens when Tanjiro fights with the Hand Demon. Moreover, it somehow denotes how stronger Tanjirou has become with time.

This is the awakened form of Tanjiro’s scars. During his fight with Rui, the evolution of his scars become visible. When he uses his Breath of The Fire God technique, the scar appears to look like a red flame.

This form of the scar has only been seen in the manga till now. Tanjiro finally awakens his Breath of The Fire God mark when he fights with Daki. It now covers his whole face.

So as the manga will go on we will see the scar taking different shapes all according to Tanjiro’s abilities.

Tanjiro’s Earrings are Hanafuda earrings. It’s been passed onto him by his father, so it’s kind of symbol of Breath of the sun.

I am sure most people don’t know what Hanafuda means. Hanafuda is actually playing cards of Japanese Origin. Hanafuda means flower cards. If we look at the earrings, they look like a paper talisman. It has a red circle in with several lines extending from the circle in different directions. This creates a look of a flower, thus known as Hanafuda earrings.

Relation with Breath of The Sun Users

Tanjiro’s Earrings are Hanafuda earrings that have been passed down through generations. The earrings have been worn by Tanjiro’s father Tanjuro and the first Breath of the Sun user Yoriichi Tsugikuni. Unfortunately, the power is not passed onto the girls that’s why we couldn’t see Nezuko use it. But she has become a Demon now, does this mean she can use that technique. We will update the blog further. Stay tuned! Muzan also remembers about a past incident when he sees Tanjiro wearing those earrings. He is reminded of a near-death experience.

We could see a person who looked like an Older Tanjiro who stuck fear inside Muzan. Thus may be leading to the slaughter of his family.  The direction of the story and the hints provided in the manga point toward the strong link between the Hanafuda earrings and the Breath of the Sun Users. So Tanjiro’s Scars and his Earrings, adding the facts about them. We can indeed speculate that Tanjiro is a Breath of the Sun user. That too a powerful one.

That’s all for now, hope you got a more clear understanding of Tanjiro’s Scars and his Hanafuda Earrings.

Update- You Can Buy Hanafuda In Indian Subcontinent. Click Here.