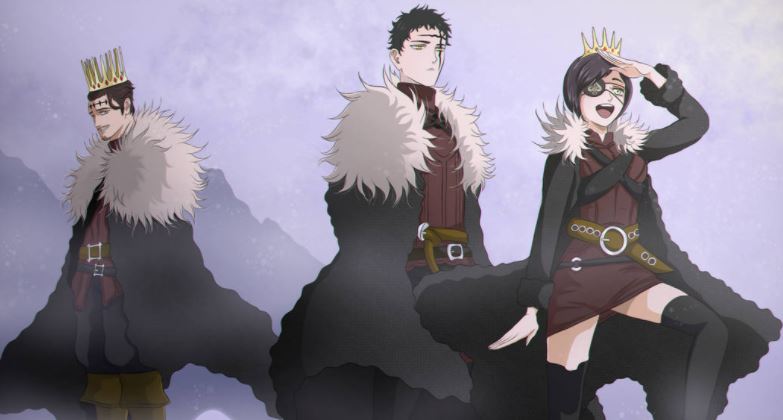 On November 1, 2019, the Black Clover anime series introduced the strongest villains so far- “The Dark Triad”. As we all know that Black Clover has been one of the favorite anime/manga titles among fans. After the Elf Resurrection arc, Yuki Taba has been working diligently to give something more hyped.

So, Yuki introduced the “STRONGEST VILLAINS OF BLACK CLOVER SO FAR- The Dark Triad.”

Introduction of The Dark Triad

The Dark Triad has three members all of them are possessed by the strongest Devils. Therefore on top of hosting Devils, their powers are on an equal footing of a Devil. They also a group of followers knows as the Dark Disciples who are also very powerful. The reason behind their power is that they get their massive boosts with the help of the Devil’s powers.

Who are the Members of the Dark Triad?

There are three main Members in the Dark Triad and as well they have 8 disciples who are known as the Dark Disciples. We will talk more about them in Depth here, keep reading the article in SpoilerGuy to get to know more.

Dante is the oldest of the Zogratis family and acts as the leader of the Dark Triad. Overall he may look like a kind and Easy Going individual but in reality, he is very sadistic in Nature. On top of that, he is also seen as every Manipulative person as he tries to Make Asta use his Demon From by threatening him that he will harm Gauche.

Dante also acts as the brains for the Dark Triad often choosing the places where they will attack and how to do it. He is also extremely misogynistic as he doesn’t care about Vanessa’s or Grey’s feelings and keeps on calling them his Woman.

Dante also has his Devil Lucifero. Due to his devil, he has super regeneration abilities. On top of that, he is also able to generate more limbs and body parts.

Vanica is the younger sister of Dante and Zenon. She also possesses the demon Megicula. Vanica also like Dante is heartless as she orders the killing of the Heart Kingdom people without any second thoughts.

All the members of The Dark Triad are heartless. She also tries to use the loyalty of people for her whims and fun. However, she is able to do so because she is backed up by a lot of power from Megicula.

You have probably heard of the Megicula Curse because Noelle’s mother died after giving birth to her because of that curse. There was one time in the manga where she turns her followers into suicide bombers to cover her escape.

Zenon is the youngest sibling of the Zogratis family and also the youngest member of the Dark Triad. However, like his older brother and sister, he doesn’t have any malicious traits and doesn’t hide any intentions.

He is also extremely Loyal to the Spade kingdom and will do anything to make the Spade Kingdom know throughout the world. However, there are times where Zenon let’s lose his bloodthirst and arrogance. This is seen in his battle with Yuno where he almost killed him and Asta.

However, also unlike his brother and sister, it is unknown what kind of Devil he is possessed by. Zenon is also very capable of using Bone Magic. he can manipulate his own bones and harden them.

They are perfect for his fighting style as it has both offensive and defensive capabilities.

Dark Triad vs Our Heroes

There have been multiple occasions where our heroes have fought with the Dark Triad. However, there are a lot of fights here people get obliterated in seconds after fighting the Triad.

This fight takes place in the very Head Quarters of the Black Bulls. Dante seeks to fight with Yami as he is well known, till then he decides to play with the other black bull members.

Dante is surprised to see Asta and wants to fight with him and his demon. Guache and Vanessa also try to help Asta but it doesn’t even faze Dante. Dante however is intrigued by Vanessa and Grey and hits on them multiple times.

As the fight continues, Yami comes to their rescue. Soon after that Yami and Asta Together manage to take down Dante using Yami’s Katana and Asta’s Anti Devil Magic.

The fight with the Dark Triad is still not over for the Black Bulls. After Dante is not able to move, Zenon comes to his rescue and manages to stop everyone there and run away with Dante.

All the Black Bulls attacks had no effect on Zenon. So if he wanted to he could try and kill a few of the Knights there. But Since Dante was not in a good state, he didn’t risk it.

The Golden Dawn vs Zenon Zogratis

This fight also results in a major victory for Zenon. He manages to obliterate everyone including Yuno and William Vengence. The members of the Golden Dawn try to fight Zenon but, there’s not even a scratch on Him.

The Fight ends in a one-sided victory for Zenon and Yuno is left in a near-death state. The Dark Triad is really very powerful and our heroes have to train a lot to get on an equal footing with them.

While Zenon was fighting Yuno, Zenon mentions that Yuno is not weak at all, it’s just that Zenon is the more powerful one here. And note that he was only using 55% of his power. The Real Power of the Dark Triad is much more powerful than their current one.

This fight took place when Vanicia attack the Heart Kingdom. This fight was a really close one as Noelle and Secre are powerful, but still, they weren’t powerful enough to defeat Vanica in her demon form.

Noelle even after using her Valkyrie from, and Lolpechka’s Lucid Sanctuary. Vanica manages to come out on top and take Lolpechka as a hostage.

Predictions about The Dark Triad

This section is solely based on what I hope is going to happen in the future and how our heroes will be able to defeat this evil Dark Triad.

Asta demon vs The Dark Triad

Right now, the best bet against The Dark Triad who all use demon magic is Asta. As he already hosts a Demon in his Grimoire and has Anti Devil Magic Swords. Liebe, who is Asta’s devil has hate for all kinds of Demons especially Lucifero, Dante’s Demon. Lucifero was the one who killed Asta’s Mom.

Licita was the one who was taking care of Liebe after she had to abandon Asta because of her disease. As being close to her might have been harmful to Asta. Over-time, Asta will come to terms with this and that will be when Asta get’s a serious motivation to kill all the Devils.

Despite having no Mana or Magic, he is one of the most powerful characters in the show. So it is quite possible that in the near future we see a really badass battle between Asta and Dante, and their Demons Liebe and Lucifero too.

It might be clear to you now that, just how powerful The Dark Triad really is. And on top of that, they still haven’t used 100% of their powers yet. In the future, we are bound to see some cool fights between the Dark Triad and our Heroes. There are actually a lot of Powerful and Strong Black Clover Characters. It would be interesting to see a fight between them in the near future.