Spoiler Guy
Home Recommendations Best K-Dramas based on Webtoons that You Should Really Watch! 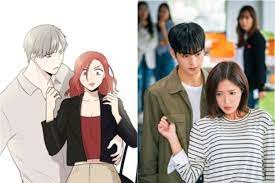 Many a time, we don’t realize that the Korean Dramas that we watch are actually adapted from webtoon. So here is a list of  K-dramas Adapted from Webtoon. As webtoon gained popularity amongst fans, more and more ideas developed. One such idea includes the Korean Drama adaptation.

There are many popular K-dramas on various platforms that were first a webtoon. Fans across the globe have readily accepted the real live versions of webtoon with dashing actors and actresses.

With easy access to Netflix and Viki, we can binge as many of these Korean dramas as possible. The pandemic has made us super bored and given us ample time to watch as many as we want. Without any further ado, let’s jump into the list of Korean-dramas Adapted from Webtoon.

Jo Gwang-jin created this webtoon. The K drama adaptation was released in 2020. There are sixteen episodes in it. This is what one calls a complete package. There is thrill, revenge, struggles, happiness, fun, realistic touch, romance, and comedy. This became one of the most popular K dramas. The casting was beyond amazing. The direction was lit as well. It is not one of the typical Cinderella-based love stories. The OSTs are magnificent and are difficult to get out of your head.

2.Cheese in the trap

Written by Soonkki,  Cheese In The Trap is one of the most popular webtoon series to date. It took the writer 7 years to complete the whole thing. The webtoon spans 4 seasons, amounting to a total of 184 chapters. It focuses on the life and relationships of a group of university students.

Hong Seol is a hardworking student who has two amazing friends. Yoo Jung, who is her senior,  is the rich and popular heir to Taerang Group. Although he seems nice and kind to everyone around him, he is quite manipulative and hurts the hose who irritate him. This K Drama has one of the finest second leads that make our hearts skip a beat. It is a unique Korean Drama which is very interesting.

Love Alarm is adapted from a webtoon known as Ringing If You Like. Chon Kye-young created it. The webtoon had its own Youtube channel. The K Drama adaptation was released in season 1. Season 2 of it was released in 2021.

The plot is a typical high school Korean romantic drama with a love triangle. The girl lives her life facing difficulties, working part-time on different shifts while managing her studies. She lives with her aunt and means cousin. Her parent’s suicide when she was young, and somehow she escaped. The mix of technological advancement is brilliant. Season 2 of Love alarm was beyond our expectations.

It is the work of novelist Kim Yong-ki. Unlike many webtoons, this series uses a monochrome color scheme to set its dark and cynical tone. It’s Korean Drama adaptation was released in 2019.

Strangers From Hell is basically about the story of Yoon Jong-Woo. He is a young guy who is in his 20s. Jong-woo moved from the countryside to Seoul after he received a job offer from his friend. He was looking out for a place to live, and he came to Eden Gosiwon. It was a cheap apartment. It had a common kitchen and bathroom that the residents were to share. Eden became a very different apartment building from all the previous ones that Jung-Woo had visited before. He promised himself that he’d stay there only till he could save up enough money, and things get very creepy.

5.My Id is Gangnam Beauty

My ID Is Kee Maeng-kee writes Gangnam Beauty. The K drama adaptation was out in 2018. It is available on Netflix. The K Drama version spiced things up. It became a popular K Drama that fans across the globe loved. It is basically about a girl who underwent plastic surgery because of her school days’ torturous bullying.

Her “rebirth” seems successful initially, but as her life at the university unfolds, her plan starts to backfire. That is when she meets the quiet, handsome, and cold-hearted hero. This K Drama has a very satisfying ending, and the OSTs are fabulous.

Must Watch Korean Dramas With Gloomy Ending in 2021

Must Watch Thriller Korean Dramas in 2021