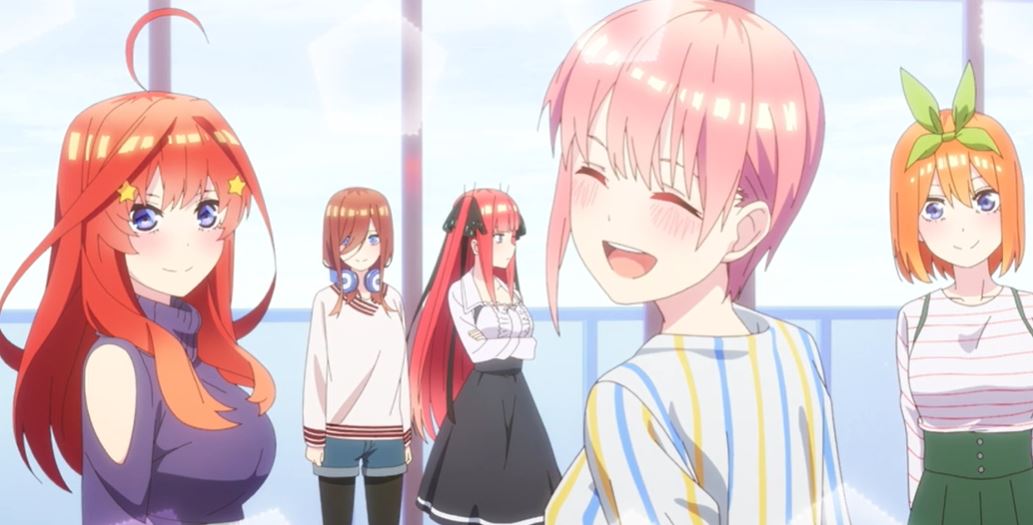 Tezuka Production is producing the anime series. Other known Tezuka Production works are Astro Boy, Dororo, and how not to summon a Demon Lord and some more titles. The Manga also won the award for the best shonen manga at the 2019 Kodansha Manga Awards. The series also has a rating of 7.59, which is relatively high for a Harem anime.

Episode 3 of the Season 2 of The Quintessential Quintuplets is a part of the Nino Redemption Arc. Therefore, this episode will have a lot of Drama about Fushigoro and the girls. We got to see everything from Nino’s perspective in this episode.

Satoshi Kuwabara was responsible for directing the first season. Keiichirō Ōchi is the primary writer for the second and early season. However, the show acquired a new director, Kaori.

Where to Watch Episode 3 of The Quintessential Quintuplets Season 2?

You can watch The Quintessential Quintuplets Season 2 Episode 3 at Crunchyroll, AnimeLab, Funimation, and as well as VRV. However, they will all be region-specific and only for the premium members; the rest all of us have to wait for some time.

Finally Watched the second episode of The The Quintessential Quintuplets Season 2 🥺
The tension between Miku and Nino is really high💥
BTW, I'M still on #TeamMiku pic.twitter.com/YUiZvntYy9

If you want to know more about The Quintessential Quintuplets Season 2, you can check out their official website.

What happened in Ep 2 of The Quintessential Quintuplets Season 2?

In The Quintessential Quintuplets Season 2 Episode 2, Futaro spends the entire night preparing tests for the Nakano sisters. As the final exams are only a week away, he is anxious about the girls. He hopes that everything will be ok and the sisters will manage to get the passing scores.

However, as Futaro was working throughout the night, he was tired but still went to teach the sisters. Itsuki shows her worry about Futaro and asks if he really had to stay awake all night. He tells the girls that he has to set an example for them. Futaro manages to feel a  hostility between Nino and Miku for some reason, which also worries him.

Futaro tries to help both Miku and Nino but fails. This makes Nino walk away from him and the tuition. Futaro is upset at the fact that his hard work went to waste. Miku tries to stop Nino from leaving and asks her to come back. However, this angers Nino even more, and she rips one of the test papers that Futaro made. Itsuki slaps her because Futaro made it for them.

When Nino hits her back, Itsuki is annoyed and shows her one of the papers which Fushigoro made. He had written everything by hand for the girls. Itsuki tells Nino that they can at least show appreciation for Futaro’s hard work. Nino realizes that all her sisters are angry at her for doing this.

She blames everything on Futaro for making her sisters hate her. Nino and Itsuki decide that they will be leaving their homes and won’t talk until either of them apologizes.
Miku and Futaro manage to find Nino at a hotel, but she refuses to go home. Miku tells Furtaro that Itsuki forgot her purse at home. This worries him a lot. However, Futaro finds out that Itsuki is at his home with his family.

Episode 3 of The Quintessential Quintuplets Season 2 is the continuation of this episode. We will get to know more as the next episode comes out next week.