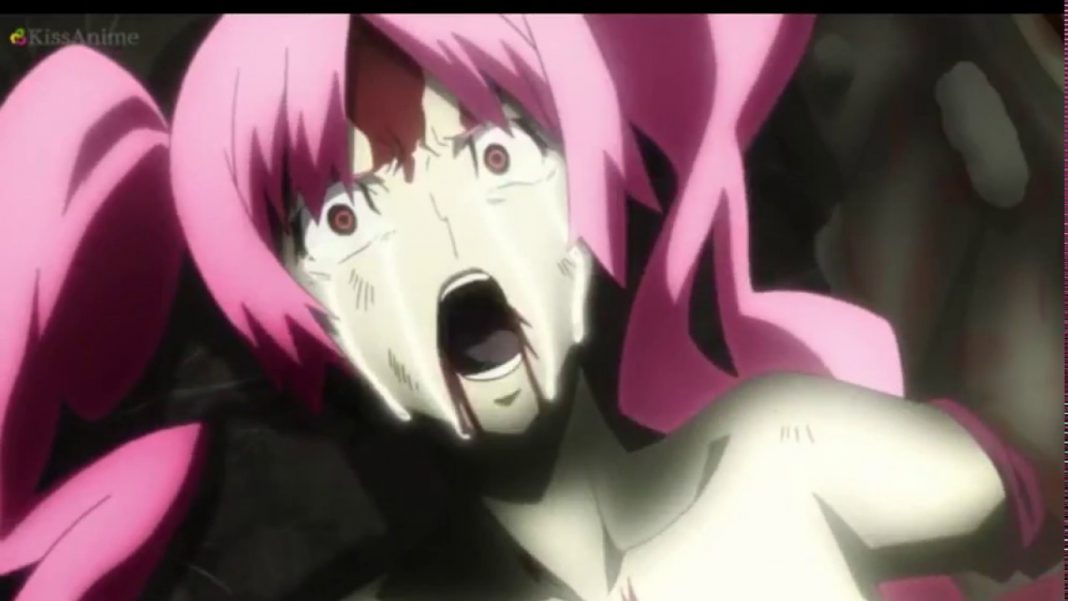 This list will focus on the Best Horror anime or the Top 10 Horror anime which are actually scary to watch. These are some of the creepiest anime I have seen to date, and I don’t recommend watching them alone.

The one thing that people love more than laughing is being scared. The
suspense, horror, thrill, and grotesquely vivid details shown in anime send chills
down one’s spine. Anime series on this list deliver a flavor of horror unique from
western cliches. If you are looking for tiles which are truly grotesque, stories and
plots disgusting and bloody as it is riveting and suspenseful, look no further Here we have our Best Horror anime List.

In England, the undead, vampires, and ghouls are on the rise and are stalking the
living, but the only people who can stop them are the members of the British
Task Force, Hellsing, led by the daughter of the infamous vampire hunter Prof.
Van Helsing. This might not be as scary as the other entries in our list of best horror anime but it still one of the coolest anime to watch in general.

Hellsing has everything from badass characters and weapons to good plot and
character development. It also has a good amount of violence, blood, and
goriness which makes it a must-watch for anyone who loves horror anime and vampires this is the first entry in our list of Best Horror Anime.

Ghost Hunt follows the story of Mai Taniyama and her ghost investigating
exploits with the president of the Shibuya Psychic Research Company, Kazuya
Shibuya. This our 9th entry in our Best horror Anime list.

The anime fits well in the horror category because of its themes and premise, the
greatest part of it is the fact that it’s extremely suspenseful and thrilling It’s not one that will scare you out of your wits but, the ghostly elements here are
enough to keep you tightly gripped to its story. Overall, Ghost Hunt is a casual
ghost and horror story you can enjoy much like a real-life ghost hunt and thus is a worthy entry in our list of Best horror Anime.

Even though it’s not an anime that delves in the original elements of horror, it
does demonstrate a new kind of fear-based itself from gore and monstrosities
capable of shutting down all hope and conveying-on a feeling of despair. It might not totally be your typical entry to the Best Horror Anime List, as it is more of an action anime then horror one. Still, it has it fair shares of Jump scares and Gore scenes.

In an era where humans have been forced to live in giant-walled cities and
humongous flesh-eating monsters called titans to roam free on the lands, there’s
nothing left for humans to do but to live their lives in a peace that’ll probably
never become permanent. One day, a colossal titan suddenly shows up and
destroys the outermost walls causing the lesser titans to lay waste upon the outer
city. Fortunately, there are two more inner walls intact, which gives humanity time
to prepare and finally strike back at the titans with all their might. This is one cool action-packed entry in our list of Best Horror Anime.

Read More: Types of Titans in Attack on Titan Explained

After performing various brutal experiments on the Diclonii, who is a humanoid
species with horns and psychic abilities, no one knew their Queen Lucy would
escape the facility. As Lucy was escaping from the facility where she was being
held captive, she let out her vectors and obliterated everyone who was coming
her way.

She did manage to escape but was knocked out and lost her memories
in the process. Now, she’s out in the world on her own. But if she regains her
memories, humankind shall learn of the overwhelming hatred she possesses
through her murderous vectors. This Anime is where the Horror and Gore Pump up. This by many people is considered one of the best horror anime among the classic anime. Do watch this.

When many deaths occur in the quiet village of Sotoba, Doctor Toshio Ozaki
initially suspects an epidemic but soon becomes convinced that something else
is causing them. This sounds like a Plot worthy enough to be the 6th Entry in our List of Best Horror Anime.

Shiki is surprisingly good considering that it revolves around vampires and the
reason being that in our age vampires aren’t scary anymore. It starts off a bit slow but builds a pace after which it becomes so dark, mysterious and soul-chilling that you’ll have a problem trying to stop yourself from getting to the bottom of the incidents along with the doctor. This includes both mystery and horror and establishes itself as one of the Best Horror Anime.

When They Cry starts off in a quiet, peaceful little village that looks quite very
ordinary. That is until strange events start occurring around town, murders take place, and
the lives of the friends are twisted into dark realities. This obviously means that When They Cry is one of the Best Horror Anime out there.

Higurashi first appears to be the typical slice of school life anime, which is proven
to be false during every arc. The cheerful characters soon become twisted,
psychotic, and begin murdering one another in extremely gory ways. At first,
Higurashi is confusing, but I think it’s completely worth it to continue watching it to
unravel the mystery of the rural village. Higurashi has its share of violence,
torture, murder, and is not for the faint of heart.

Parasites are types of organisms that take over a particular host. In Shinichi
Izumi’s world alien parasites have come from another world and plan to take
control of humans. This eventually results in infected humans to viciously
murder anyone who stands in their way.

What makes this anime truly amazing is the great cast of characters who go
through massive character development. Shinichi, a once quiet boy must deal
with a Parasyte named Migi who took control over his hand. Parasyte is based
on a manga originally published in the 1990s and has aged very well. Truly it is one of the Best Horror Anime.

Every week at 5 p.m. an old man in a yellow mask shows up at a children’s
playground and tells them ghost stories based on myths and urban legends of
Japanese origin. The man tells the stories on the back of his bicycle using a
traditional kamishibai (Paper Drama) method and features a new tale each week.
Yami Shibai has a more unusual setting than most anime.

Every story is based on old Japanese traditions, occult, ghost, and all of them are made to terrify, disturb, and to scare. Watching this will be a truly chilling experience for anyone. And this marks our entry in the Top 3 of the Best Horror Anime List.

Koichi Sakakibara is a new student at a small-town high school. He becomes
friends with a girl named Mei who wears an eye patch and doesn’t have any
friends. Eventually, she tells him the story of how every year, a strange calamity
occurs in class 3 of 9th year.

The plot is carried very masterfully by the writers. Its eerie, ghostly, it’s disturbing, and gory as well – all the right elements in perfect quantities to make up one hell of a deathly tale. Another is an Anime which is full Final Destination of Anime. Full of Unexpected Deaths and Gore along with Some spooky and Horror Elements. This is one of the Best Horror Anime out there.

This overwhelmingly forbidding anime runs for only 4 episodes but is surprisingly
so scary, it can freak the living hell out of you. It delivers a massive blow with its
scares ( backed by graphic imagery) that you would not expect. I believe that this
is the best horror anime that exists in this world (that I know of).

The story revolves around a group of students that perform a ritual on the grounds of their
elementary school, not knowing the fact that the school has a really grim history.

You can watch all of these Animes in Netflix and Crunchyroll.

Thanks for going through the list, I hope you got to know new anime for your watchlist for those horror buffs. Stay tuned for more articles and be sure to Stay Safe and Stay Inside.

Best K-Dramas based on Webtoons that You Should Really Watch!