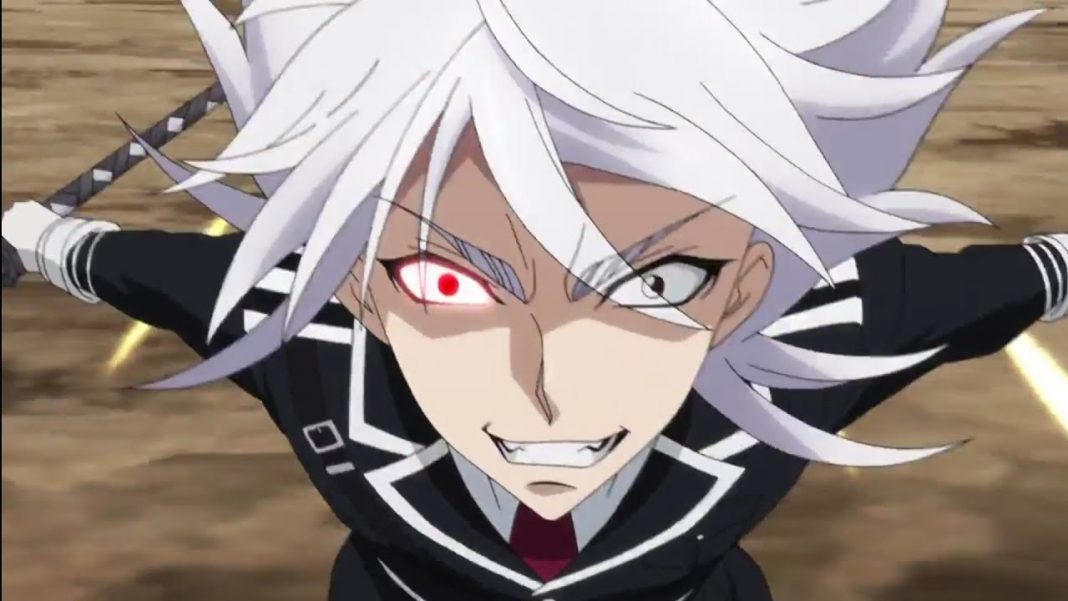 In this list, we are going to talk about the Top 10 Ecchi Harem Anime with Overpowered Main Character.  Let’s be true to ourselves, pretty much every anime fan loves Ecchi animes. It has the right amount of fan service and cute moments with a tad bit of romance here and there. I

f we pair that up with a really strong lead it will become a fantasy of many people. Cute and Sexy Girls with a really good lead who just obliterates everyone is a pretty good watch for anyone.

So let us being the list. DO note that we have tried to include some new titles as opposed to some already titles like High School DxD and Food Wars! Don’t be disappointed, give these underrated ones a try.

In Private Aichi Symbiosis Academy, which was originally a school for High Society Girls. But when it became CO-ED the girls in regard to their safety asked to be permitted to bring and use weapons in school to protect them from other males. Therefore the five member committee to protect girls was established. So our Problem Child but overpowered Mc gets transferred here and thus his encounters with these girls begin as they all being to succumb to him one by one. And yeah all the male students in the school are forced to act and dress as girls.

It’s a really nice anime with a fair bit of overpowered mc surrounded with powerful girls. The art is a bit ok but i find the colors to be a bit bland compared to the other anime. I think the animation studio was going for some aesthetic. Plot and Character development is decent. Accordingly, Busou Shoujo is a pretty nice anime give it a try. Although there are  better anime coming in the list.

There’s a special Phenomenon where young people get transported to fantasy worlds and basically become heroes for their respective worlds. There are some of them who manage to return with their special powers. So our Mc Akatsuki Ousawa is one of them. He is know as the Rouge Hero because he kidnaps the Demon Lord’s Daughter and brings her back to Earth with her. The people with special abilities as such are required  to attend Babel, a special school.

Basically the hero is too overpowered, being capable of defeating multiple enemies at once along with stealing their underwear. He basically wipes the floor with his opponents girls and boys alike. He rides lightning-charged motorcycles, gets girls and crushes others using only his testosterone. If you want to watch a totally overpowered mc absolutely destroy others and a bunch of sexy girls with a lot of fan service. Give this a try.

Lux is our mc and the former prince of the Arcadia Empire which was overthrown by a rebellion five years ago. He’s living a normal life since then avoiding the fact he was the prince. One day he accidentally trespasses in the Female washroom and happens to see the new princess of the kingdom, Lisesharte naked making her furious. She then challenges Lux to a Drag-ride Duel. Drag-Rides are ancient armored weapons that have been taken out from ruins all around the world. Lux used to be called the strongest Drag-Knight when he was the prince, but now he’s known as the “Weakest Undefeated” Drag-Knight because he does not attack in battle. After his duel with Lisesharte, Lux ends up attending the female-only academy that trains royals to be Drag-Knights.

This anime is a ecchi, action, harem and school genre, all these genres together result in an anime style that usually is a really good combination for some. The art is really amazing and the battles also feel good. Along with a lot of fan service and cute girls, Saijaku Muhai no Bahamut is a really good choice.

Areshia Spirit Academy is a very prestigious academy for holy shine princesses. These Shrine Princesses train elementalists and try to form a contract with them. Only females can for the contract until our badass and overpowered c, Kamito Kazehaya shows up. He’s the first man in 1000 years to form a contract with a spirit. He is invited to the Spirit Academy and is trained to participate in the spirit tournament. Thus his journey to become powerful beings.

Let me tell you Kamito is not like those other Clueless Mc’s he knows what needs to be done and acts on it. Although he is extremely overpowered capable of taking down an entire squad of Terrorists on his own but his brain is his true strength. . The Art and animations are pretty good and are very good to look at. Give this a try.

So some extraterrestrial called Savages attacks human race. The only thing that can counter that is a hundred. Hayato Kisaragi is the only human boy till now capable of piloting a Hundred that too in the getting the highest compatibility with the suit till now. He gets invited aboard the Little Garden, a military academy. Well overtime he gets popular over the girls in the academy.

So an overpowered mc winning every single battle against the savages, getting the cute girls all over him. One thing i hate that is the mc is dumb against the moves made by these girls. It gets annoying sometimes. Although the art and the animation is pretty good and nice to look at.

Alclia is a country where everything is governed with a count which may represnt any number of thing related in life. If a Count reaches zero, the person is sent to the Abyss. A place rumored to be worse than death. Licth Bach is a legendary ace who are the war heroes of the previous war. He now lives a life of wandering of doing what he wants. One day a girl Rina meets him and thus their jounrny beings.

Licht is one tough cookie to deal with, just as you think he is going to lose boom, he whips out his unlocked power absolutely obliterating the enemy. Plunderer follows the journey of Hina and other inhabitants of Alcia as they discover the truth about their world, the Abyss, and the legendary Aces. The art and the animation is on point and i highy suggest you to watch the show.

A disaster know as Invertia changed the world. All the previous nations declined and a conglomerate know as Integrated Empire Foundation was formed. The incident also lead to the formation of a new species of humans who could use some kind of physical enhansment know as Genestella. Ayato Amagi is one such human, he joins the Seidoukan Academy in search for his missing elder sister.

Ayato is one overpowerd mc too, capable of fighting anyone toe to toe no matter how long they have trained for. Although the whole cast is good all with their own back story, Ayato is just Special. Desptie being a harem ecchi anime, the character development is pretty good. And the story gets interesting as it proceeds. It might seem typical at first but the plot improves rapidly.

Kojo Akatsuki is a normal High school body in the Demon District of itogami island. Somehow he comes a vampire and the 4th Proginetor. His whole life changes as he has dangerous potential to one day rule the earth. Specifically, fearing Kojou’s destructive potential, the Lion King Organization sends in Yukina Himeragi to kill the Kojo. Therefore, forced together by circumstance they form an alliance as Kojo learns to use his abilities his abilities.

Let me tell you from the beginning the art is super good in Strike the Blood. The fights are incredibly detailed and is a bliss to look at. All the girls in Kojo’s harem are super cute and interesting too. The character design is so good although my only complain is that the background characters don’t get much development.

Inquistators are special warriors who fight magical creatures to safeguard humans. The Anti-Magic academy is a school where these inquisitors are training. The school splits students and trains them in order to make them work together. The 35th squad is a low ranking squad with supposedly weak members. This changes with the addition of a new member in the squad, a rouge with killer. The Squad Captain, Takeru Kusanagi is our Mc. After the squad tries to work together as a team, he basically starts using his true powers. He fights with a sword splitting a bullet in half. Pretty overpowered Right.

The anime has a good solid plot and nice characters and the action is so good. The character development is amazing. We get to see the journey of the 35th squad from the worst to the best squad in the academy.

Yuuji Kazami is a transfer student who goes to Mihama Academy. He wants to live an ordinary high school life, but this dream of his may not come true any time soon as Mihama Academy is quite the opposite. Consisting of only the principal and five other students, all of whom are girls, Although Yuuji becomes acquainted with each of them, discovering more about their personalities as socialization is inevitable. Slowly, he begins to learn about the truth behind the small group of students occupying the academy—they each have their own share of traumatic experiences which are tucked away from the world.

So basically this is an adaptation form a visual novel, so this is not your typical harem but it does have a fair bit of the normal harem and ecchi tropes. But the anime’s story and art is just too good. Yuuji is one badass of a Main character literally nothing in the show fazes him a bit. He’s literally op in every aspect. He’s one of the coolest anime protagonist. Do give this a try.

Well, this is if for the update on Yashahime: Princess Hald Demon Episode 7 Release Date, and more. Also, read Chainsaw Man Chapter 92 Release Date and More. Be sure to follow us on Facebook, Twitter, and Instagram for more interesting and the latest updates about anime.