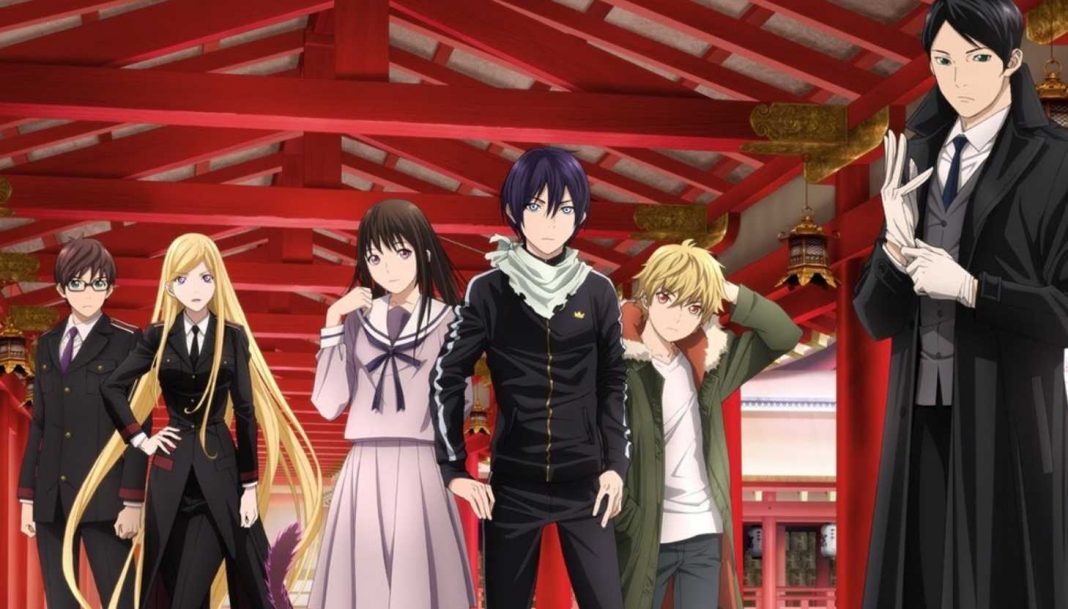 So here we are today with another list on the Top 10 Most Powerful Noragami Characters. Noragami is one of those animes which every fan needs to watch. Back in 2014, when the first season of Noragami aired, it was an instant success. It’s one of my Favourite anime to date, especially the 2nd season.

Everything about this anime is great, the art, animation, and especially the opening intro and most importantly the characters. So today we are going to Discuss the most powerful Noragami Characters.

Yukine being one of the three protagonists in the show deserves to be on the list. He is a spirit vessel and minds you, a powerful one.  In the Right hands, he is totally overpowered. The only thing that’s stopping him from being up in the list is the fact he needs a partner to show his true power.

Yato is the owner of Yukine, they both are totally fearsome together for anyone to oppose the Yatogami. In his Sekki form, he transforms into a giant Odachi(Odachi is a type of Katana which is bigger than normal). After Yukine becomes a Hafuri Vessel, he takes the form of twin katanas becoming one of the most powerful Noragami characters.

Kiun is Takemikazuchi’s Shinki. He is also one of the most powerful Shinki in the series and takes the form of a Snake-like Dragon Made of Lightning. Kiun was so powerful that, after the Reincarnation of Takemikazuchi, Kiun was hidden and forbidden to be used.

Kiun or the Thunder Blade is so powerful it was regarded as the most powerful spirit vessel despite not yet achieving the Hafuri state.

Kazuma is the strongest Shinki available at the Disposition of Bishamonten. He’s not someone who has over the top abilities or firepower but someone who boosts the abilities of it’s owners to a whole new level. Kazuma along with Bishamonten defeats Kiun and Takemikazuchi after they go rogue and kill Ebisu.

He is seen as a very polite and hardworking individual. Kazuma is also the last survivor of the Ma Clan, who all were Bishamonten’s Shinki. Kazuma asked Yato to help kill the rest of the Clan because they were corrupt and causing a blight on Bishamon.

Tenjin is one of the most Richest and The popular God in the series because of the Fact that he is the God of Learning. So despite the age people come to worship him for academic success. He might not look that Powerful or Fearsome but when he becomes angry he has the power to manipulate Storms and Typhoons.

When he originally died as a Human, people suffered from Plagues and Famines. Tenjin is also very serious and not lenient at all. He also has a superiority complex with other gods.

Kofuku is the God of Poverty. Basically what she can do is suck every bit of Good Luck from your life and make you suffer. Kofuku looks like a Schoolgirl and has a cute appearance.

Well not that powerful in the aspect of raw physical power, her true ability lies in negating all the blessing and the good fortune. Even Ebisu and Okununushi can’t defend against her misfortune. She was also implied that she is powerful enough to defeat Bishamonten.

Rabo is one of the main villains in the show. He is similar to Yato, a God of Calamity. Rabo is also quite tall having a Hawk like an appearance. He is cold to the boot having little to no sympathy for humans or gods alike. Rabo is extremely powerful and is capable of storing and summoning phantoms.

He can also merge with phantoms and get powers from them. Along with the power of Yato’s old Shinki, Nora. He becomes a force reckon with.

Takemikazuchi is the God of Thunder and the God of Swords. He along with Kiun became one of the most feared and revered gods. He was technically a hero but went mad with power. His own Shinkis grew tired of him and Revolted. The shinkis won and forced Takemikazuchi to reincarnate without his shinkis and lightning power.

Right now, his power is incomplete, if he gains back his ability. He and Kiun will be the most powerful characters in Noragami.

Izanami is the most powerful god, she is the queen of the Underworld and the mother of First Gods. She is the longest living god but her condition is not something good. She is basically a skeleton.  Her appearance changes on the basis of the person seeing her.

She is the queen of The Underworld, so all the Phantoms or Ayashaki are under her control. She is also capable of controlling Yomis.

Bishamonten is the God of War and Warriors. She is a beautiful goddess who has long blonde hair. She also loves all her Shinki. Due to the past events of her failure to protect her shinki she accepts all the wandering spirits. Although after the incident she became more distant and cold towards her Shinki.

Her Shinkis are what makes her so powerful, she along with Kazuma to guide them is one of the most powerful forces. She also holds a lifelong grudge against Yato, although she later admits that it wasn’t Yato’s Fault.

Yato is the Main Protagonist of the show. He is a shrineless god who’s aim is to become famous and have people worship him. He is labeled as the God of Calamity and Depression before. Yato is childish and mischievous although very kind at heart. He is also seen to be very materialistic and crass.

Before he was very ruthless and cold-blooded. Falling all kinds of orders without any hesitation. Yato is Immortal, and can easily recover from almost death state. He is also a former God of War, skilled in using swords and Spears. Yato used to be even more powerful in the Past. He can also use Zetsu and Zan. He also has the ability of Divine Possession.

Currently, Yato is in possession of Yuki and Kazuma. He also saved Bishamonten earning him his title of Heaven Rendering Lord earning much respect among gods. Thus he truly is the Most Powerful Noragami Character.

This is it for Noragami. In any case, you haven’t watched Noragami till now, You can do so on Netflix and Crunchyroll. Also, be sure to read up on the latest blogs and posts in Spoilerguy.

Will Nezuku and Zenitsu end up Together in Demon Slayer?