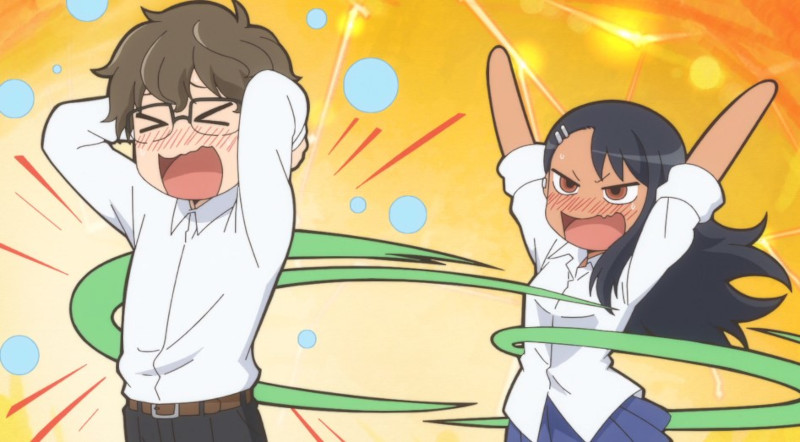 Top Anime like Dont Toy with Me, Miss Nagatoro

Teasing Master Takagi- San is on the top of the list for Anime Similar to Don’t Toy with Me, Miss Nagatoro. It’s a very fun-loving rom-com which has a girl named Takagi San who is a professional teaser.

Takagi-san’s favorite thing is to tease Nishikata who is a middle school boy and also her classmate. Nishikata makes a vow to himself that after being teased so much by Takagaki, he will tease her and make her blush at least once from embarrassment! You can binge the 12 eps of Teasing Master Takagi- San on Netflix and Crunchyroll.

Uzaki-Chan is an Anime like Don’t Toy with Me, Miss Nagatoro, but it also comes into the genre of ecchi. The concept of the anime is the same, where the female character Uzaki Hana wants to make Sakurai Shinichi’s life hell by constantly teasing him.

The only wish Uzaki-Chan is to hang out with Sakurai, where he wants to be alone and be peaceful. But Uzaki-Chan has other plans, where she won’t leave him alone as she develops a crush on him.

Must Read: Anime Similar to Higehiro

The Anime “Tsurezure Children” is a rom-com and its main plot revolves around various high school students who have crushes on each other. It is an Anime like Don’t Toy with Me, Miss Nagatoro.

Both anime have a concept of Girls teasing their crushes and embarrassing them, its a fun 12 ep anime that you can binge on.

In Japan, there is a service where men who are single can Rent a Girlfriend to spend time with them. The male protagonist, Kazuya Kinsoshita gets dumped by his girlfriend, which makes him lonely and depressed. He goes through an app where you can rent girlfriends and comes across the perfect one.

Kazuya books Chizuru Mizuhara who is the perfect girl on the app, even her ratings by her customers seem perfect. But when he meets her he gets flustered easily because of the beauty of Chizuru. If you’re looking for an Anime like Don’t Toy with Me, Miss Nagatoro, you will love Ren-a-Girlfriend. You can watch it on Netflix.

This Anime has a great story as it starts when two very well-known students in high school develop a crush on each other. When you look at them together, they may seem like a perfect couple to you.

Kaguya-sama season 1 – 8/10
One of the few romcoms that actually made me laugh. Great cast, both main characters and supporting characters are interesting, fun and cool. Animation and OST are great. A really good adaptation. pic.twitter.com/Iigz50oYOr

Despite loving each other, Miyuki and Kaguya’s ego comes in-between as they want the other party to confess it first. If you want an Anime Similar to Don’t Toy with Me, Miss Nagatoro, then Kaguya Sama is the perfect one with just 12 episodes. You can watch the first season on Netflix and Crunchyroll.

This anime comes into the fantasy-type slice of life anime, but the concept is also the same. As every salaryman known in Japan, Kuroto who is tired of his workaholic life and needs a break from the hoopla of life comes across a demi-god fox girl named Senko San.

Senko San starts taking care of him as Kuroto develops a crush on her. The real reason for Senko san arriving was to reduce the stress of kuroto and make him live his life normally again. As a fox deity, her job is to save people before it’s too late.

Dagashi Kashi is more of a Slice of Life anime, where the female lead named Hotaru Shidare moves from Town to countryside and meets Kokonutsu Shikada. Kokonutsu is an aspiring Mangaka who wants to make it big.

Bein the daughter of a Candy Factory’s owner Hotaru is approached by Kokonutsu’s father where he asks her to help out. The deal is to make kokonustu san join his sweet shop and leave the mangaka dream aside. Will she succeed at it? Well, it’s a 12 ep Anime, why not binge on it on Crunchyroll.

Recommended For You: Anime Similar to Mushoku Tensei: Jobless Reincarnation