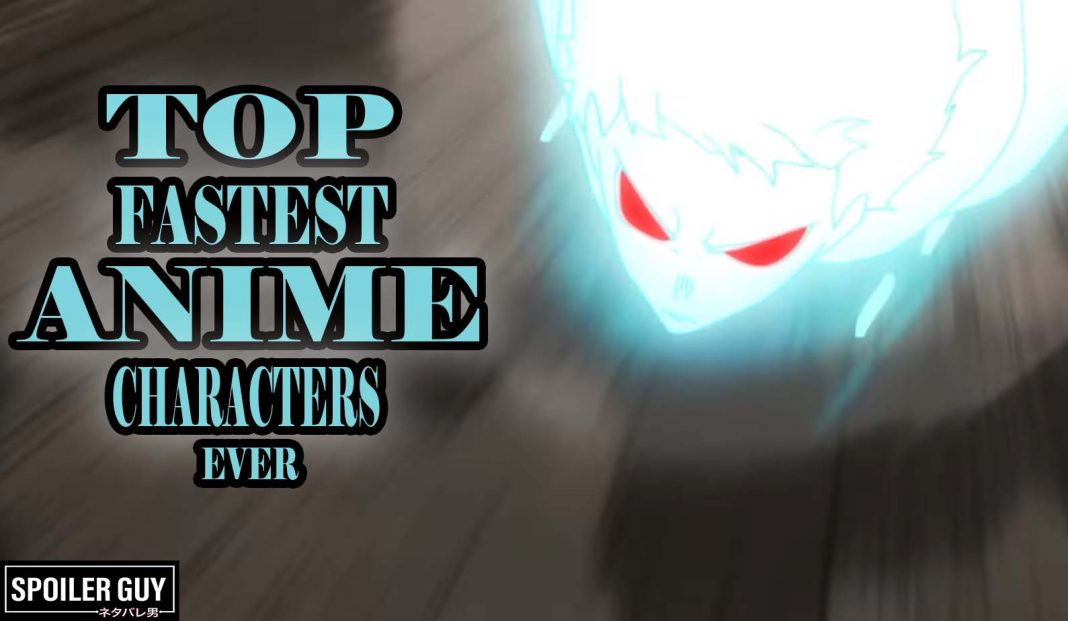 Shounen Anime characters, in general, have a lot of unique superhuman powers. Naruto, My Hero Academia, Bleach, One Piece, Dragon Ball, etc., have powerful characters with distinctive powers given to each individual. This has been the ball game for many creators as it attracts the highest percentage of fans. But most of you might wonder who the strongest anime character is in one particular trait. One such example is “Who are the top fastest anime characters?”

Saitama is known for his one punch that obliterates anyone, anything, and everything. But this blad headed superhero is much more than just power; he can move at unimaginable speeds. This is why he is on our list of Top Fastest Anime Characters. He has proved this on numerous occasions. Saitama out matches Sonic, Genos, and even Boros.

One punch man is the best anime show season 1 & 2 are fantastic #OnePunchManseason3#releaseSeason3#bestAnime pic.twitter.com/vI59Ncw2d3

Saitama may not be as fast as light, but he is the fastest in the entire OPM universe and can travel at speeds faster than the naked eye can comprehend. His serious side is yet to be shown in the anime series; fans can’t wait to see another scenario where Saitama uses his superspeed.

Yet another Dragon Ball Character in another Listicle article. Son Goku is one of the strongest characters ever made. He is also one of the fastest anime characters as well. This is because he has mastered traveling through space and time, ultimately teleporting to another place. This has been his added advantage during battles against dominating opponents.

Son Goku’s God-like ability is so unique and powerful that he can induce fear in his enemies by simply teleporting. Among most anime characters who are superfast, Goku is one of the few who can actually teleport.

Shinra Kusakabe is a new fan-favorite hero due to his overpowered character and string willed attitude towards problems. He never flinches when he is on the brink of death. His capabilities are truly something else. Recently we witnessed him breaking the limits of his limits. This produced a pure blue flame that was super cool to look at. Fire Force Season 3 will probably showcase the use of his blue flames when he goes against the top cream of Evangelist’s pawns.

After receiving the grace on 2 special occasions, Shinra was able to break through the barrier of space and time by traveling at the speed of light. His body disintegrates at this point and re-emerges from thin air with a huge amount of force added to it. This deadly power resides within him and can be essential in preventing the 2nd great Fire, which is why he is a part of the top fastest anime characters ever.

Shinra Kusakabe will evolve further into a fine fire force soldier; fans can’t wait to continue this journey along with him. While you wait for the next season, you can try reading our article on Haikyuu Season 5 – Release Date & Time, Where to Watch? Anime Franchise on 2021 Announcement?

Minato Namikaze is undoubtedly the fastest in the naruto verse. He mastered the 2nd Hokages,” Flying Thunder God Jutsu,” and used it in the most unimaginable ways possible. His quick thinking and skills in battle complement this gold like speed like no other shinobi. Rather than running, Minato specializes in Teleportation Jutsu. He is so fast that the claimed fastest shinobi – The 4th Raikage was of no match.

Any Naruto fan will gladly accept Minato’s presence in the list for the Top fastest anime characters ever. He single-handedly killed over 1000 shinobis and ended the war by inducing fear in the other nations. His teleportation jutsu stopped the attack of the nine-tailed beast and saved further destruction of the village. Minato also played a vital role in defeating Obito and Madara.

The yellow flash is the most worthy and loving anime character to be on this list due to his tremendous speed and influence of his power in his past battles. Feel free to check out more about naruto characters here at Spoilerguy.

Whis is an underrated character from the Dragon Ball universe. He is the guardian angel of Beerus ( God of Destruction ). Whis is known for his martial arts training and being overprotective of Beerus. He is an angel and the child of the grand minister. Whis cannot die unless he is eradicated; this is possible only if he happens to disobey a law.

He can use many superpowers that are god-like in many ways. His well-known power is “warp.” He can teleport his master or himself to multiple galaxies in just a matter of seconds. His superiority in teleportation is unmatched in the entire DBS universe. Hence making him worthy of being on the list of Top fastest anime characters.

I hope you guys liked this article. Now that you have completed reading this article, you can make up your mind on who truly is the fastest anime character in the history of anime. If you liked this, you might like Strongest Anime Gods to Ever Exist in the History of Anime!